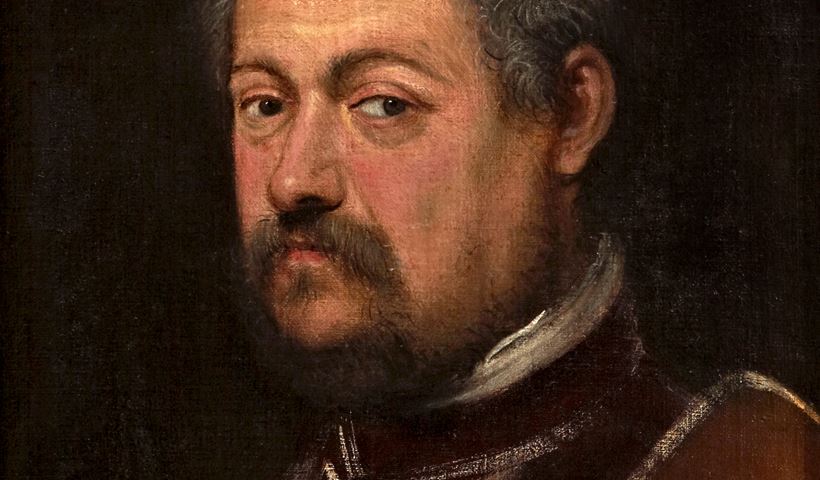 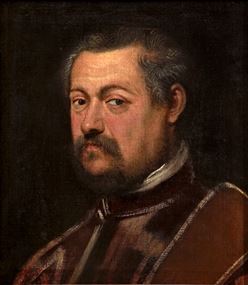 Domenico Tintoretto was the son of Jacopo Tintoretto. He was taught by his father and assisted him in his workshop. At the age of 17 he was admitted to the Venetian painters’ guild, and he is recorded in the confraternity of painters from 1594. He began his career by helping his father to execute the paintings in the Sala del Collegio and Sala del Senato in the Doge’s Palace, Venice. Following this he worked independently at the palace, on the Sala dello Scrutinio and the Sala del Maggiore Consiglio. His training with his father helped him in his own compositions, several of which, such as the Battle of Salvore, or the Second Conquest of Constantinople, are heroic battle themes with complex groupings and dramatic poses. In the last two decades of the 16th century Domenico concentrated on religious commissions in Venice, including a Last Supper and Crucifixion (both c. 1583) for S Andrea della Zirada (both in situ), a Marriage of the Virgin for S Giorgio Maggiore (in situ) and a Crucifixion for the Scuola dei Mercanti. During this early period as an independently commissioned painter he continued to collaborate with his father on occasions, notably on the Paradise (1588–90) in the Sala del Maggiore Consiglio in the Doge’s Palace.

Domenico was also an accomplished portrait painter (e.g. Portrait of a Young Man, 1585; Kassel, Schloss Wilhelmshöhe) and in 1591 the Scuola dei Mercanti in Venice ordered two large portrait groups from him (both Venice, Accad.). In 1592 he went to Ferrara to paint a portrait of Margaret of Austria, later Queen of Spain, and in 1595 he went from Venice to Mantua at the invitation of Vincenzo I Gonzaga, 4th Duke of Mantua, to execute a portrait commission. Some of his most impressive civic portraits were also painted in the last decade of the 16th century, such as that of Doge Marino Grimani (c. 1595; Cincinnati, OH, Art Museum). Like many of his others, this is framed by landscapes and vegetation and reveals the influence of his father’s assistants, Lodewyk Toeput and Pauwels Francke. In secular works of this period, such as Venus, Adonis and the Three Graces (1585–90; Chicago, IL, Art Institute), Domenico translated his father’s structures and compositions into his own individual language, allowing more room for landscape and background details. In these mythological scenes he displayed the same preoccupation with the topography of Veneto that is evident in his portraits of this period. Domenico’s style is furthest from that of his father in his drawings, in which the quick, expressive lines that Jacopo used to suggest figures are replaced in Domenico’s drawings with clearly rounded limbs and torsos in chiaroscuro. A good example is his Recumbent Nude (Ames private collection) in which he experimented with light as a means of defining form.

At the end of Domenico’s career, after the death of his father, there is a notable change in his style. The phosphorescent colours and intricate compositions that he had so aptly borrowed from Jacopo in earlier works gradually disappeared. Later paintings, such as the altarpiece of the Virgin Interceding with Christ for the Cessation of the Plague (1631; Venice, S Francesco della Vigna), lack the vitality of the religious panels of the 1580s. Nevertheless, they effectively communicated Counter-Reformation messages and coincided with the naturalism popular in Rome in the 17th century.