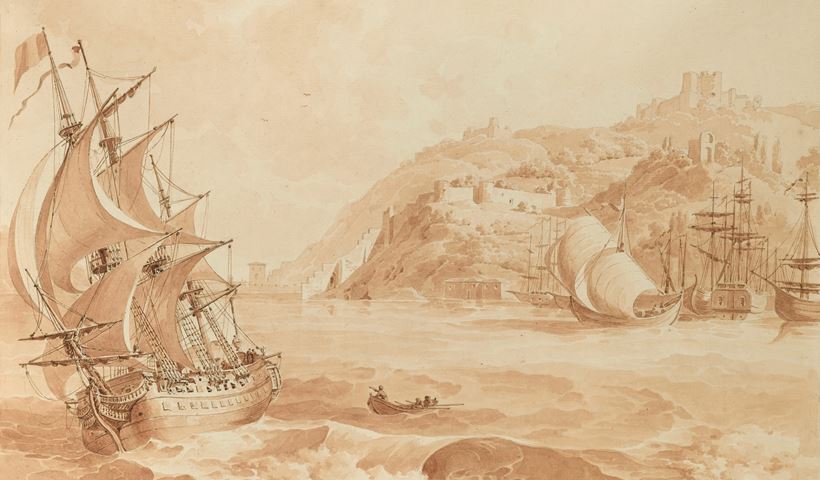 A Castle on the Bosphorous 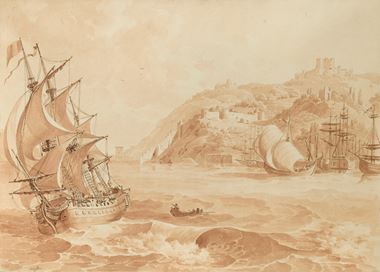 A Castle on the Bosphorous

After the death of his father, the sculptor Claude Michallon (1751–99), and of his mother in 1813, Achille Michallon he was brought up by his uncle, the sculptor Guillaume Francin (1741–1830). He drew from life at an early age and studied with Jacques-Louis David, Pierre Henri de Valenciennes and later Jean-Victor Bertin. For four or five years starting in 1808 Michallon may have received financial help from Prince Nicolay Yusupov after the latter had seen some of his works in David’s studio. Although no works dating from this period are known, Michallon exhibited a View of Saint-Cloud, Seen from the Vicinity of Sèvres and a Wash-house: Study from Life Executed at Aulnay at the Salon of 1812. It is possible that two small landscapes, a View of Sceaux and a Site in Ile-de-France (both Albi, Musee Toulouse-Lautrec, on loan to Gray, Museum Martin), date from 1812–15. Their panoramic perspective, spare composition, realistic depiction of weather conditions and the picturesque quality of a figure disappearing into the distance suggest that Michallon was familiar with the work of 17th-century landscape artists.
In 1814 Michallon travelled to Vichy, and in 1815 he drew the fortifications erected around Paris; these views, which follow the 18th-century tradition of topographical landscapes, were published in aquatint in Les Environs de Paris fortifyé. Three of Michallon’s landscapes, representing the Château of Versailles, the Château of Meudon and the Château of Vincennes, recall the Rationalist tendency in landscape painting, in which an accurate description of architecture is combined with a northern European influence, visible particularly in the realistic treatment of the foreground.

In 1817 Michallon won the Prix de Rome, organized that year for the first time, for the Woman Struck Down (Paris, Louvre) and Democritus and the People of Abdera (Paris, École Nationale Supérieure des Beaux-Arts). Before leaving for Italy, he executed a series of sepia wash drawings (nine in Paris, Bibliothèque Nationale) in Dieppe, Saint-Valéry-en-Caux and Fécamps for Baron Isidore-Justin-Sévérin Taylor’s Voyage pittoresque de la France. Michallon left for Rome in 1818 at the same time as Léon Cogniet, whom he befriended. Little is known of the early part of his stay, although there is a drawing of the Villa Medici (Paris, Louvre) dated 1818, which is similar to a landscape in the Musée des Beaux-Arts in Orléans. While in Rome Michallon executed the Death of Roland (exh. Salon 1819; Paris, Louvre), a commission for the Diana Gallery at Fontainebleau. Two sketches (Strasbourg, Musee Beaux Arts.; Orléans, Musee Beaux Arts) show an idealistic landscape with an air of fiery intensity in the style of Salvator Rosa. Also at the Salon of 1819 he exhibited a View of Lake Nemi (ex-Gallerie La Scala, Paris), in which the influence of such Italianate painters as Frederik de Moucheron and Nicolaes Berchem can be seen in the light and the arrangement of the foreground. Michallon executed several studies representing Rome and its surroundings, including the Sabine Hills (Detroit, Institute of Arts) and a View of the Colosseum (Paris, Louvre).

In 1819 and 1820 Michallon travelled through southern Italy and Sicily. He made numerous drawings and painted studies of architectural subjects, such as the Temple of Neptune at Paestum and the Forum of Pompeii, and of picturesque characters, such as Countrywoman, near Rome (all Paris, Louvre). He also executed landscapes without figures, such as the Island of Ischia (Phoenix, Art Musuem) and Eruption of Vesuvius by Night (Paris, Louvre), in which he displayed his skill at observing atmospheric conditions and the time of day. Some of his drawings were engraved in Gigaud de la Salle’s Le Voyage pittoresque en Sicile (1822–6) and in Vues d’Italie et de Sicile (Paris, 1826).

Michallon returned to France in 1821, travelling through Florence, Bologna, Venice and the Swiss Alps. On his return to Paris he opened a studio that was frequented by Jean-Baptiste-Camille Corot. He executed several pictures based on his memories of Italy; in these he combined the classicism of historical landscape, in which the organization of elements was sometimes artificial, with a study of changing nature. In such dramatic subjects as Landscape with a Man Frightened by a Snake (Barnard Castle, Bowes Museum) and Philoctetes on the Island of Lemnos (1822; Montpellier, Musee Fabre), Michallon suggested the violence of the passions depicted and foreshadowed the new approach to landscape painting that flourished from the 1830s. In his last compositions, such as those executed in the Forest of Fontainebleau (1821–2; untraced), Michallon became more sensitive to nature’s melancholy and the dramatization of natural elements, without moving away from Poussinesque models. He died of pneumonia, and his paintings and drawings were sold in Paris in 1822.