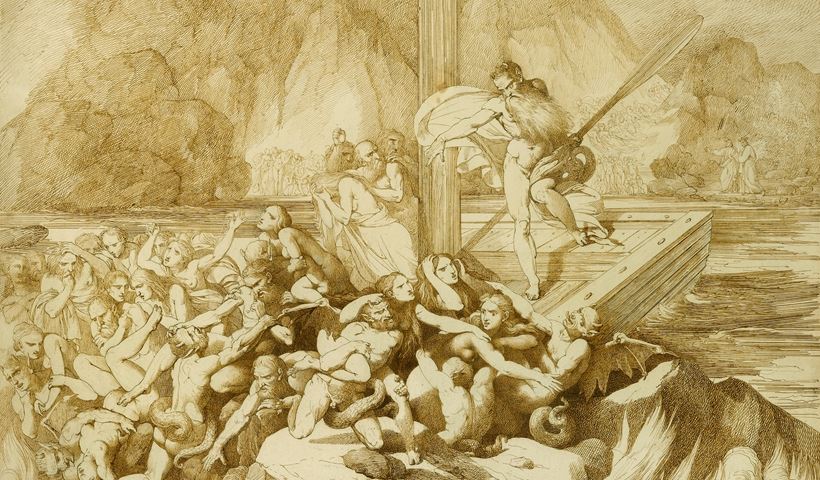 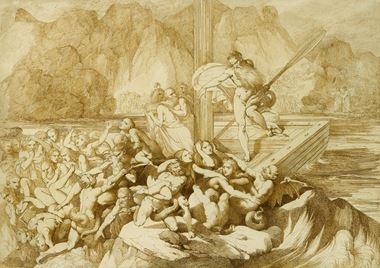 Luigi Sabatelli was an Italian painter, printmaker and draughtsman. After training in Florence in the Neo-classical tradition, he won a scholarship and settled in Rome between 1789 and 1794. His patron Tommaso Puccini was an intellectual and connoisseur who later became Director of the Gallerie Fiorentine. He was first attracted to the constructive rigour of François-Guillaume Ménageot, who taught at the Académie de France, but later he became interested in a more contemporary classicism in the style of David, and in particular in the rather austere variant represented by such pupils of David’s in Rome as François-Xavier Fabre. Sabatelli borrowed explicitly from Classical works, as can be seen in his reconstruction of the furnishings, clothing and hairstyles of the Roman period, and in his use of a type of drawing practised by the followers of David. His borrowings were more from the style of Classical art than from its philology, yet his paintings were nonetheless clearly liberated from tradition. There was an emphasis on severity and intensity, sparse, angular, compositions and pronounced contrasts.

After a stay in Venice, he returned to Florence in 1795 and began to introduce into his painting elements borrowed from Antoine-Jean Gros and animated his compositions and altered the figures in his style. From Gros, Sabatelli learnt to admire Rubens and also to absorb the emphasis on colour that was characteristic of the Venetian Renaissance and that he had avidly studied in 1794–5. Under Gros’s influence he also learnt to draw on such aspects of contemporary English painting as the representation of the Sublime, absorbing the particular inventions and the ‘terrible’ poses as in the works of Benjamin West, Alexander Runciman and John Flaxman. Sabatelli’s paintings of the 1790s and early 1800s, for example the Florentine Plaque (1801), the Plague Victims of Jaffa and the large-scale battles painted for Tommaso Puccini, are closely related to the Napoleonic ‘battle’ scenes of Gros and Anne-Louis Girodet. Although Sabatelli’s interest in West is evident in the frescoes he executed at Doccia in 1802, he interpreted the sublime tone not so much in the sense of the ‘terrible’ common to the English but more in the manner of the profound and incisive mental rigour and the stylistic integrity inspired by Neo-classicism.

Between the end of the 18th century and the beginning of the 19th, Sabatelli worked on a group of etchings of the Via Crucis that became the most widely circulated series in Tuscany. He also painted David and Abigail (in situ) for Arezzo Cathedral, to be hung with Pietro Benvenuti’s Judith with the Head of Holofernes (1803–4; in situ). At this time he established himself as one of the key figures in the revival of Florentine painting in the capacity of draughtsman, engraver and painter. For inspiration he turned to literature that displayed a taste for the ‘terrible’ and the Sublime, dwelling particularly on such characters from Dante as Farinata, Paolo and Francesca, and Count Ugolino, and on scenes from Ariosto’s Orlando Furioso. In order to expand his repertory, he also drew on such northern European writers as Shakespeare and Milton, whose works were becoming increasingly popular.

In 1808 Sabatelli moved to Milan to become a professor of painting at the Accademia di Belle Arti di Brera. He produced a series of engravings on the theme of the Apocalypse and executed large mural paintings in Milan, Novara, Cremona and Valmadrera (e.g. Vision of the Apocalypse; Valmadrera, S Antonio; in situ). Despite the success and importance of these large decorative cycles, his fame began to diminish after 1810, when the new ideals of the Restoration rejected an emotional abandonment to the Sublime in favour of Truth and Beauty, concepts that were closely bound up with the moral, social and religious values of Restoration society. However, he did not lack for patrons even in the following decades: particularly significant commissions, for example, were the frescoes representing the Council of the Gods and various subjects from the Iliad in the Sala dell’Iliade, Palazzo Pitti, Florence (all 1820–25; in situ), the decoration (1840) of Niccolò Puccini’s villa in Pistoia and paintings of Astronomy and Mathematics (1841) for the Tribuna in the Palazzo della Specola (now the Museo Zoologico ‘la Specola’) in Florence.

Collections
Sabatelli is represented in the following collections: Museo Zoologico ‘la Specola’, Florence, amongst others.