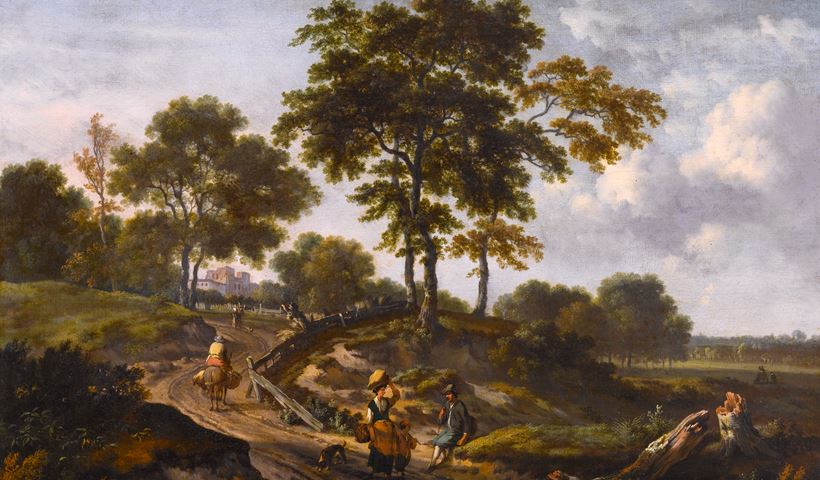 A Landscape with Peasants Conversing on a Countryside Path 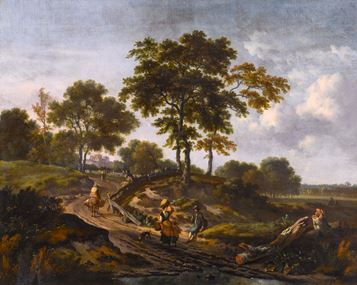 A Landscape with Peasants Conversing on a Countryside Path

Wijnants was a Dutch artist whose father was probably the art dealer Jan Wijnants, who was recorded as a member of the Haarlem Guild of St Luke in 1642. Jan the younger is documented in Haarlem several times until his departure for Amsterdam around 1660. A document pertaining to his father implies, however, that in 1653 Wijnants the younger was in Rotterdam, where the painters Ludolf de Jongh and Adam Pynacker were active. Perhaps the most important early influence on Wijnants was de Jongh’s brother-in-law, Dirck Wijntrack (before 1625–78), noted for his paintings of wildfowl. There is much evidence to suggest that the two artists often worked together during the 1650s.

Although Hofstede de Groot dated 12 of Wijnant’s pictures to an early period from 1643 to 1652, most of these can be assigned to a later period either on stylistic grounds or by a correct reading of the dates, or else reattributed to other artists. Wijnants probably began to paint shortly after 1650. Among his earliest certain dated works is the Cottage (1654; untraced). The painting is signed by both Wijnants and Wijntrack, and the chickens, ducks and other birds in the foreground are clearly by Wijntrack’s hand. Wijntrack may also have been responsible for the wildfowl in the slightly later Peasant Cottage (Amsterdam, Rijksmuseum). In both of these characteristic early paintings brick farm buildings and cottages occupy a major portion of the composition.

In 1659 Wijnants is again documented in Haarlem, and in the paintings of this period, such as Landscape with a Dead Tree and a Peasant Driving a Sheep along a Road (1659; London, National Gallery), the buildings, considerably smaller, have been relegated to the middle distance. The stark tree-trunk, a motif derived from Jacob van Ruisdael, was to re-emerge as a kind of leitmotif in Wijnant’s paintings of the second half of his career. By December 1660 Wijnants had moved to Amsterdam, where he married Catharina van der Veer. He remained there for the rest of his life, keeping an inn to supplement his income (he was constantly falling into debt). He was buried in the graveyard of the Leidsekerk.

Almost all of Wijnants’s later paintings, such as Landscape with a Sandy Slope (St Petersburg, Hermitage), are landscapes, particularly dunescapes based on the broad ridge of sand dunes near Haarlem. Wijnants followed in the tradition of dune painting established by Pieter de Molijn, Philips Wouwerman, van Ruisdael and others. Typical of his early work of the 1660s is Landscape with Cattle (1661; London, Wallace Collection). A sense of space is created in the left half of the picture by the pattern of the trees and meandering, ribbon-like paths that diminish as they recede into the distance. Sunlight appears to fall naturally on fields and dunes, highlighting at strategic points the blond tones of the sand. By contrast, the right half of the picture builds up to a dense clump of trees reminiscent of those in van Ruisdael’s forest pictures of the mid-1650s. The staffage, almost certainly not by Wijnants, has been attributed to Adriaen van de Velde, who according to Houbraken was Wijnants’s pupil. This remains conjectural given Wijnants’s presumed birthdate, but there is no doubt that the two artists occasionally worked together.

During the mid-1660s Wijnants also painted the best of his Italianate landscapes, for example the Angler (1665; untraced), which find their closest parallel in the work of Jan Hackaert from the 1660s. Wijnants never travelled to Italy, however, and it is difficult to judge the date of his first and last Italianate works.

Wijnants’s later paintings are characterized by the frequent inclusion of a blasted elm or oak tree dominating the foreground. Two examples are the Hawking Party with a Falconer (1666; Buckingham, private collection, see Apollo, viii/45 (1928), p. 118), of which there is a signed replica (London, Kenwood House), and the somewhat later Landscape with Two Dead Trees (London, National Gallery). Highly stylized foliage and fallen tree-trunks are also common motifs in these later works, which suggest, in addition to the influence of van Ruisdael, that of such artists as Pynacker and Otto Marseus van Schrieck, both of whom were working in Amsterdam from around 1660.

Wijnants’s pictures appealed strongly to the 18th-century English collectors’ enthusiasm for Dutch landscapes. His paintings also influenced 18th- and 19th-century artists, including François Boucher, Thomas Gainsborough and John Crome; the latter is said to have had a painting by Wijnants in his collection. Perhaps it was the decorative, blue tonality of Wijnants’s works of the 1660s and 1670s that was preferred by artists and collectors alike to the restricted palette of earth tones used by landscape artists in the 1620s and 1630s during the so-called ‘tonal phase’ of 17th-century Dutch painting.