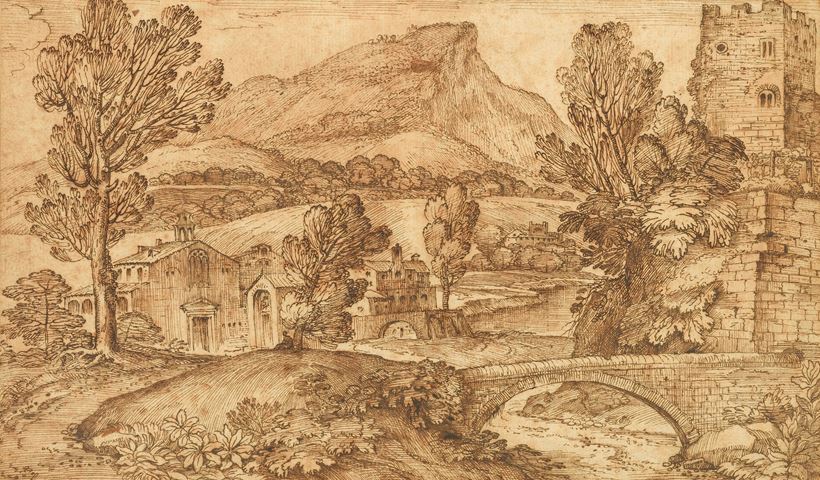 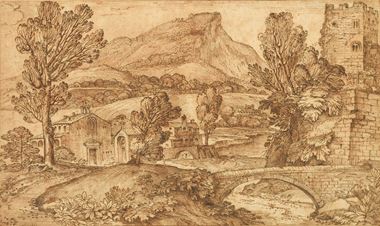 Grimaldi was an Italian painter, printmaker, draughtsman and architect. He was an accomplished fresco painter, whose decorative landscapes were popular with such leading Roman families as the Santacroce, the Pamphili and the Borghese; his many landscape etchings and drawings spread the influence of 17th-century Bolognese landscape throughout Europe. After studying in Bologna in the circle of the Carracci, he arrived in Rome c. 1626 and by 1635 was already a member of the Accademia di S Luca and associated with the circle of artists working with Pietro da Cortona. Sometime between 1635 and 1640 he collaborated with François Perrier and Giovanni Ruggieri on the decoration of the gallery in the Palazzo Peretti–Amalgia, Rome; the vault, which was probably designed by Grimaldi, was modelled on Cortona’s gallery in the Villa Sacchetti at Castelfusano. In 1640–41, again inspired by the Villa Sacchetti, Grimaldi frescoed the vault of the great hall of the Palazzo Santacroce ai Catinari, Rome.

From 1645 to 1647 Grimaldi was involved in the building of the Villa Pamphili, Rome. It seems that, while Alessandro Algardi was responsible for the design, Grimaldi acted as site architect and may have contributed to the design of the garden; he also painted frescoes of episodes from the Life of Hercules, to accompany Algardi’s stucco reliefs of the same theme. In 1647–8 Grimaldi worked with Gaspard Dughet on the decorations at S Martino ai Monti, Rome. From 1649 to 1651 he was in Paris, where he worked with Giovanni Francesco Romanelli in the palace of Cardinal Mazarin (now Bibliothèque Nationale) and at the Palais du Louvre. On his return to Rome, Grimaldi worked for Alexander VII on the decoration of the Sala Gialla in the Palazzo del Quirinale.

Between 1656 and 1659 Grimaldi was absent from Rome, and in this period he was probably employed by Cardinal Marcello Santacroce, Bishop of Tivoli, on the chapel of the Immaculate Conception in Tivoli Cathedral. A wash drawing of an architectural detail (London, British Museum) suggests that Grimaldi designed the chapel, as well as painting frescoes of scenes from the Life of the Virgin. In 1672 he painted wall frescoes of landscapes at the Villa Falconieri, Frascati, and between 1674 and 1676 he worked on the gallery of the Palazzo Borghese and decorated the end room, overlooking the port of Ripetta; from the end of 1674 he is documented as supervising the palace decoration. Between c. 1660 and 1680 he frescoed the gallery of the Palazzo Muti–Papazzurri, Rome, decorating the long walls with landscapes in fictive marble frames.

Grimaldi made many drawings (e.g. Paris, Louvre; London, British Museum), mainly in pen and ink with brown wash, often on blue paper. His Landscape (Windsor Castle, Berks, Royal Collection), where space is created by a clear sequence of planes leading into the distance, punctuated by travelling figures and geometric buildings, is a characteristically accomplished variation on a landscape formula developed by the Bolognese artists Annibale Carracci and Domenichino. Grimaldi’s over 50 etchings are in a similar style, and his graphic work deeply influenced artists of the second half of the 17th century. His rare cabinet pictures include four paintings on copper (Rome, Galleria Borghese), acquired by the Borghese family in 1678.