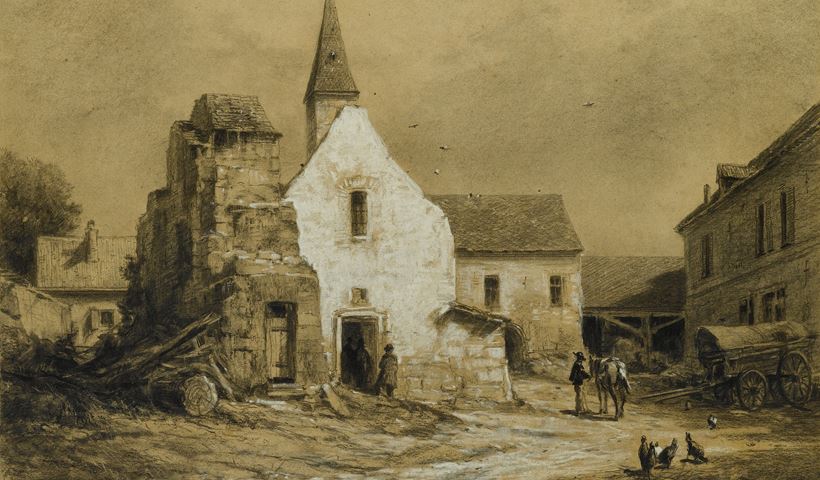 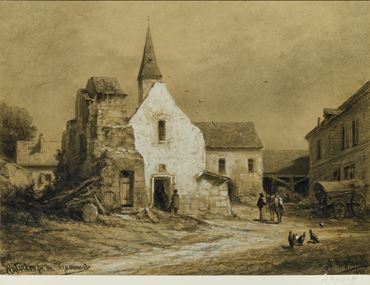 Alexei Petrovich Bogoliubov was a Russian landscape painter. He was born in the Pomeranian village of Novgorod Gubernia. His father was retired colonel Pyotr Gavriilovich Bogoliubov, and his maternal grandfather was the well-known philosopher and social critic Alexander Radishchev.

In 1841, Alexei graduated from military school, serving in the Russian Navy and travelling with the fleet to many countries. In 1849, he started to attend classes at the St. Petersburg Academy of Arts, where he studied under Maxim Vorobiev. The young painter was greatly influenced by Ivan Ayvazovsky. In 1853, he finished the Academy with a major Gold medal. He retired as a navy officer and was appointed an artist to the Navy headquarters.

From 1854 to 1860, he travelled around Europe and worked prolifically. In Rome, he was acquainted with Alexander Ivanov, who convinced Bogoliubov to focus more on drawing. In Düsseldorf, Bogoliubov took classes from the painter Andreas Achenbach. In Paris, he admired the artists of the Barbizon School, and became friends with the French painters Camille Corot and Charles François Daubigny.

Bogoliubov returned to Russia in 1860 where he exhibited his works in the Academy and received the title of professor. He taught at the Academy for some time and in the 1860s, travelled along the Volga. His paintings lost all traces of Romanticism, replacing that element with staunch realism of the natural. In 1871 he was elected to the Imperial Academy of Arts.

From 1870, he became close to the Wanderers art movement, and participated in all their exhibitions, as well as becoming a member of their board. Much older than most of the other members of the movement, he had reservations about their social ideas. In 1873, Bogoliubov left the Academy out of solidarity with his fellow Itinerants and even tried to create an alternative Russian Academy of Arts in Rome.

After 1873, Bogoliubov lived primarily in Paris, because of his heart condition. His house was something akin to a Russian colony: frequent visitors included Ivan Turgenev, Ilya Yefimovich Repin, Vasily Polenov, Mark Antokolski and Vasili Vasilyevich Vereshchagin.

In 1885, Bogoliubov opened an art museum in Saratov, the Radischev Art Museum, named after his grandfather. It was the first art museum in Russia open to the general public, fully seven years earlier than the Tretyakov Gallery in Moscow and fifteen years earlier than the Russian Museum in St. Petersburg. The naming of the museum after the "first Russian revolutionary", Alexander Radishchev, was a direct challenge to the authorities: Bogoliubov had to fight a legal battle to get permission.

Bogoliubov died on 3 February 1896 in Paris. After his death, he left all of his money (around 200 thousand Russian rubles (approximately US$6 million)) to the museum and its painting school.The school was opened after Bogoliubov's death and named Bogoliubov's Painting School. Among the painters to attend Bogoliubov's School were such important modernist painters as Victor Borisov-Musatov and Pavel Kuznetsov.

Collections
Bogoliubov is represented in the following collections: Tretyakov Gallery, Moscow; State Russian Museum, St Petersburg, and many other museum collections of Russia, amongst others. 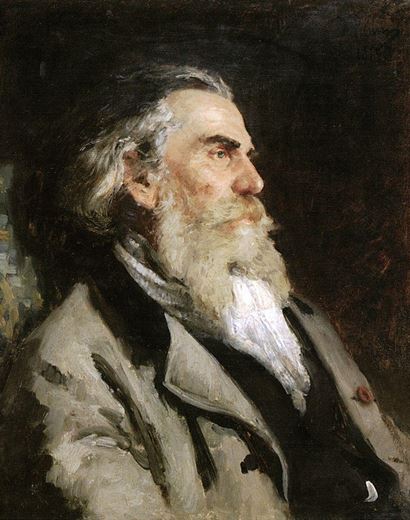