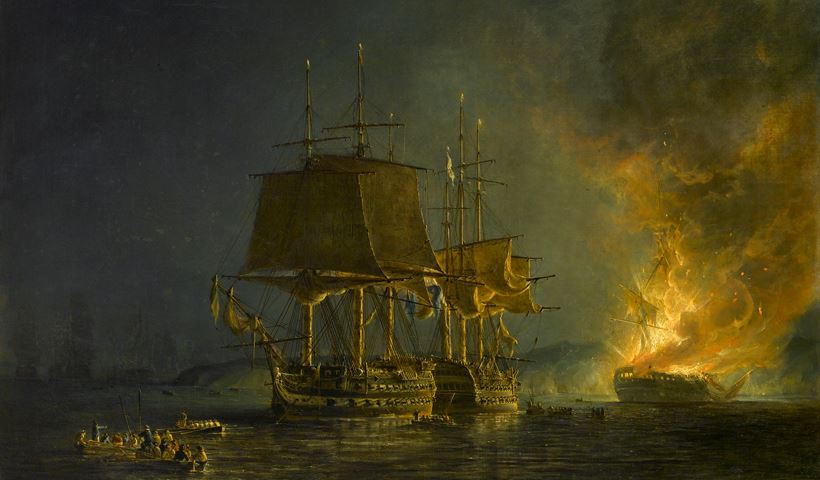 The Burning of the Russian 74-gun Sewolod After she had been Engaged and Silenced by HMS Implacable, Captain T. Byam Martin, in the Baltic, 26 August, 1808 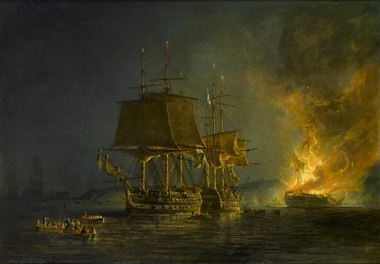 The Burning of the Russian 74-gun Sewolod After she had been Engaged and Silenced by HMS Implacable, Captain T. Byam Martin, in the Baltic, 26 August, 1808

After an apprenticeship in the Bristol shipbuilding yards of Richard Champion, Pocock began a career at sea in the mid-1760s. He was a practised and gifted amateur watercolourist (his earliest signed and dated watercolour is from 1762), and when in command of the Lloyd, one of Champion’s merchantmen, he began to keep detailed logbooks illustrated with wash drawings (four at London, National Maritime Museum). In 1780 he gave up his sea career, married and sent his first oil painting to the Royal Academy. The picture arrived too late for exhibition, but Sir Joshua Reynolds wrote back, noting ‘It is much beyond what I expected from a first essay in oil colours’. Pocock exhibited annually at the Academy between 1782 and 1812 and enjoyed a steady supply of commissions for oil paintings and watercolours, mostly of marine subject-matter. He produced a series of watercolour views of Bristol (stylistically close to Edward Dayes) in the 1780s, many of which were engraved, and of Iceland in 1791. In 1804 and 1811, editions of William Falconer’s poem The Shipwreck were published with plates etched after Pocock’s designs.

Pocock worked as a war artist in the 1790s: he witnessed the Battle of the Glorious First of June (1794) and recorded this and several other actions of the French wars; many of these works were engraved. Less adept artistically than his predecessor Charles Brooking and less advantaged socially than his contemporaries the Serres family, Pocock was nevertheless a gifted and prolific artist. Works such as the Cutting out of the ‘Hermione’ (exh. RA 1800; London, National Maritime Museum), romantic in spirit, confirm his artistic range. One of his sons, William Innes Pocock (b Bristol, June 1783; d Reading, 13 March 1836), also became a seaman and marine artist.