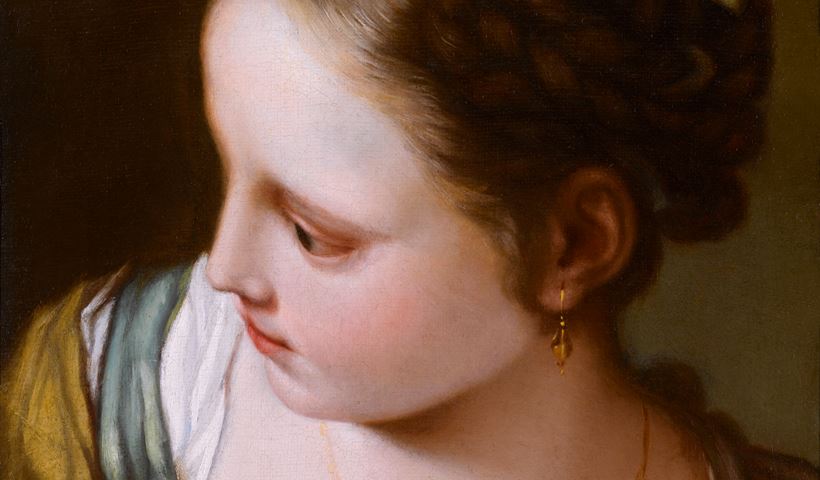 Portrait of a Young Girl 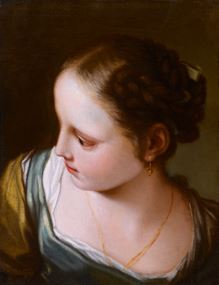 Portrait of a Young Girl

Benedetto Luti was an Italian painter, draughtsman, collector, dealer and teacher. He was one of the most significant and influential artists active in Rome in the first quarter of the 18th century. The son of a Florentine artisan, he trained in his native city under the direction of Anton Domenico Gabbiani and thoroughly absorbed the style of Pietro da Cortona and his late Baroque successors. In 1690 he left Florence for Rome, where in 1692 he made his artistic début in the annual St Bartholomew’s Day exhibition with a monumental painting of God Cursing Cain after the Murder of Abel (Kedleston Hall, Derbyshire). He quickly rose to prominence and in 1694 was elected to the Accademia di S Luca. He produced a variety of works for the leading Roman families—the Torri, Colonna, Pallavicini, Barberini and Odescalchi—and enjoyed the patronage of Pope Clement XI, Cardinal Pietro Ottoboni, Cardinal Carlo Agosto Fabbroni and Padre Antonin Cloche, Master General of the Dominican Order. He was invited to participate in the most important papal commission to painters in Rome in the first quarter of the 18th century, that for the series of Old Testament prophets above the nave arcade in S Giovanni in Laterano; his contribution was Isaiah (1718; in situ). With many of the same artists who painted for Pope Clement XI—Giuseppe Bartolomeo Chiari, Francesco Trevisani, Andrea Procaccini, Sebastiano Conca, Luigi Garzi—he was also involved in the major secular commission of the time in Rome, a series of ceilings in the Palazzo de Carolis (now the Banca di Roma), contributing an Allegory of Diana (c. 1720; in situ). In Florence he enjoyed the support of Grand Duke Cosimo III de’ Medici, and it was through his connection with the Tuscan court that his artistic reputation spread to France, England and Germany.

Like many young artists in Rome around 1700, Luti consciously adapted his native style of painting to conform to the Roman classical tradition and devoted years to the study of the paintings of Raphael, Annibale Carracci, Domenichino, Reni and Maratti, the grand exemplars of Roman disegno. His long years of study were rewarded in 1712, when he produced the Investiture of St Ranieri (Pisa Cathedral), his first major work to reveal on a grand scale the traditional Roman conventions of invention, expression, composition and anatomy. This brilliant rephrasing of Roman classicism according to the lighting, colour and handling of Florentine Baroque painting resulted in a style that was distinguished, within the context of contemporary painting in Rome, by its effects of luminosity, colour, painterly richness and naturalism. Its grand, rhetorical manner, which formed the basis of all Luti’s subsequent works, was demonstrated again in one of his greatest pictures, St Carlo Borromeo Administering Extreme Unction to the Plague Victims (1713; Schleissheim, Neues Schloss), painted for John William, Elector Palatine. In 1713 he also dispatched the first of his paintings commissioned by the Electoral Archbishop of Mainz, Lothar Franz von Schönborn: Diana and Endymion and Venus and Adonis (Pommersfelden, Schloss Weissenstein). Following the death of Maratti in 1713, Luti’s reputation in Rome was greater than that of any other painter in the city, and during his lifetime it was seriously rivalled only by that of Trevisani and Chiari.
Luti was one of the great colourists of 18th-century Rome, and his influence on later artists, such as Pompeo Batoni, was considerable. He was not, however, a prolific painter (only some 75 autograph paintings survive), and he is probably better known today for his pastel (e.g. Portrait of a Man, 1718; London, V&A) and coloured chalk drawings. These studies of single heads and bust-lengths of apostles, saints, angels and children are remarkably fresh and brilliant. They were deliberately imitative of the art of Correggio, which enjoyed an enormous vogue in the 18th century, and share with the paintings of the 16th-century Emilian master similar qualities of sweetness, charm, suavity and, above all, grace of colour and drawing.

One explanation for Luti’s restricted artistic production is his activity in the Roman art world as connoisseur, collector and academician. Owing to the patronage of Grand Duke Cosimo III, Luti received countless opportunities to meet foreign visitors and their agents in Rome. With a reputation as the ‘best connoisseur in the city’ (Richardson), he was one of the principal dealers on the Roman art market. He maintained close relationships with foreign collectors in Rome, in particular with Pierre Crozat and Pierre-Jean Mariette, and he was involved in the sale and dispatch of Queen Christina of Sweden’s famous collection of paintings to Philippe II, Duke of Orléans, in Paris. As a collector, Luti achieved an even greater reputation, among Romans and foreigners alike, and one contemporary estimated his collection of drawings to number around 15,000. He was active also as a teacher and academician. He held private drawing classes and maintained a large studio on a more formal basis, especially between 1710 and 1720. Among his more notable pupils were Pietro Bianchi, Placido Costanzi, William Kent, Jean-Baptiste van Loo, Carle Vanloo and Giovanni Paolo Panini. He exercised an important teaching and administrative role in the Accademia di S Luca: from at least 1704 he was elected annually as one of the judges for the academy’s competitions; he frequently taught the life drawing classes; he played a prominent role in 1715 in the deliberations leading to the major changes in the institution’s statutes intended to consolidate its authority in the Roman art world; and in 1720 he was elected Principe.