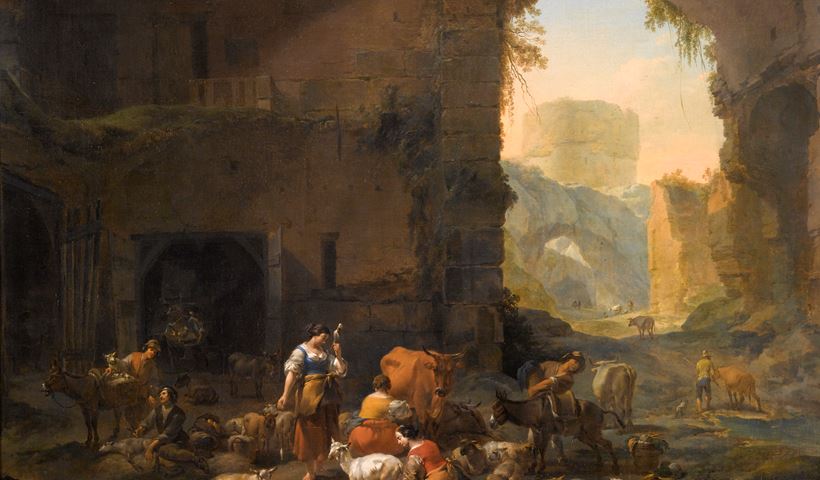 Milkmaids and Shepherds with their Flock at the Mouth of a Grotto, a Drover Watering his Cattle Beyond 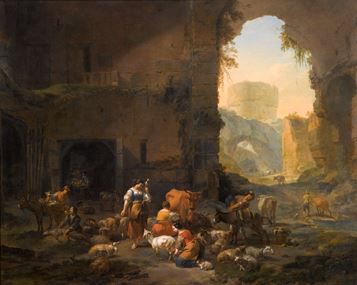 Milkmaids and Shepherds with their Flock at the Mouth of a Grotto, a Drover Watering his Cattle Beyond

Berchem was a highly talented and successful painter of pastoral landscapes and a member of the second generation of Dutch Italianate painters. These were artists who travelled to Italy, or aspired to, in order to soak up the romanticism of the country, bringing home sketchbooks full of drawings of classical ruins and pastoral imagery. Berchem’s oeuvre is versatile and includes scenes of his native landscape as well as fanciful Mediterranean harbours and Italian ruins, night scenes, hunts, battles, complex allegories, mythological narratives and history paintings. Berchem’s prolific output was estimated by Hofstede de Groot as amounting to over 850 paintings, a figure no doubt inflated by numerous misattributions, but significant nonetheless. In addition, he is credited with more than 300 drawings and 50 etchings, mostly animal studies. His career brought a number of collaborations with artists such as Gerrit Dou, Jan Wils and Jan Baptist Weenix the elder.

Often landscape artists employed Berchem to enhance their work with his singularly charming depictions of figures and animals. He occasionally painted the staffage for his friend Jacob van Ruisdael’s paintings, providing a welcome distraction from the monotony of the landscapes with his inventive characters. Berchem and van Ruisdael travelled through Westphalia together around 1650 and drew the countryside and landmarks such as the Castle of Bentheim, which figures prominently in both artists’ work. Berchem clearly had a particular affection for animals and inserted them into his paintings wherever possible. This was not limited to pastoral works but extended to his mythological scenes, such as the Education of Jupiter belonging to the Hermitage, in which the artist gives the flock of sheep the most prominent positioning on the canvas.

Berchem was first taught by his father, Pieter Claesz, who instructed him in drawing. Arnold Houbraken claims that Berchem went on to study with Jan van Goyen, Claes Moeyaert, Pieter de Grebber, Jan Wils and Jan Baptist Weenix. Whether or not he had formal training with these artists, there are unquestionable parallels in their work. Berchem joined the Haarlem Guild of St Luke on 6 May 1642 where he quickly gained pupils. He also taught his son Nicolaes (van) Berchem, who made a career of copying his father’s works.

While it is obvious that Italianate landscapes play a significant part in Berchem’s oeuvre, the question of when and even whether Berchem visited Italy is unclear. It is most likely that he went there between 1651 and 1653, although he may have gone two or three times in total. While there is no firm evidence of these trips, the presence of works by Berchem within the Colonna family collection from an inventory dated 1714, and a biography written by Nicola Pio in 1724 with a list of the collections that contained works by Berchem, provide support for the artist’s presence in Italy. He often incorporated identifiable sites such as the waterfalls at Tivoli or the nearby Temple of Sibyls into his compositions.

Berchem’s paintings of the 1650s idealising rural life, like the present work, are reminiscent of the work of Jan Dirksz Both (1610/18 – 1652), a founder of the Italianate movement. Both travelled to Italy around 1637, where he met the French painter Claude Lorrain, with whom he collaborated on a series of landscape paintings. These compositions, incorporating travellers on a road, peasants at work or Roman ruins bathed in the evening light, were the hallmarks of Dutch Italianate painting.

Posthumously, Berchem’s Italianate works were particularly exalted in the eighteenth century. More engravings were made after Berchem than any other Dutch artist, leading the French Rococo painter Jean-Baptiste Oudry to muse that, ‘one single picture of this brilliant artist can replace a complete course in practical training’.