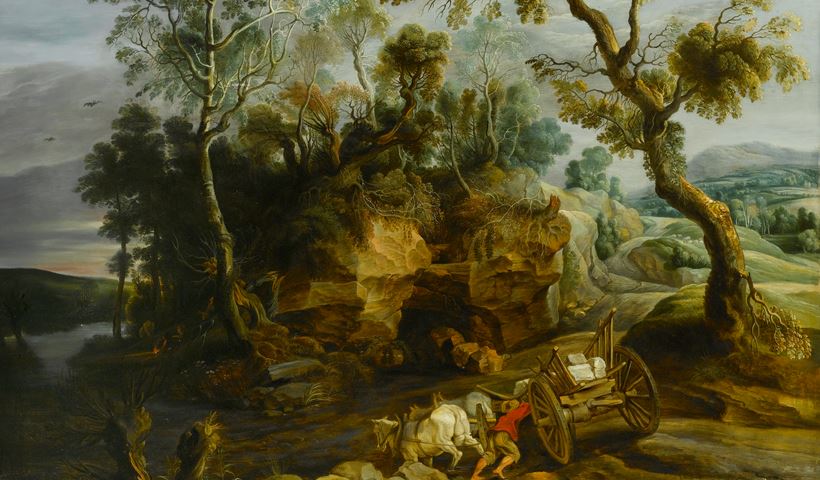 Landscape with a Cart Crossing a River 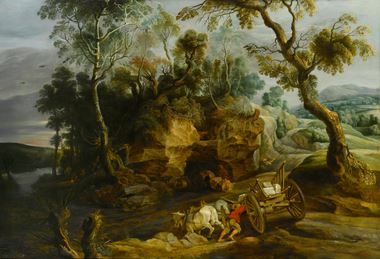 Landscape with a Cart Crossing a River

Lucas van Uden was a Flemish painter, draughtsman and engraver. He was the son of Artus van Uden (b 1544), town painter of Antwerp, and grandson of Pieter van Uden, founder of a noted tapestry and silk factory in the city. Lucas was probably trained by his father and in 1626–7 was enrolled in the Antwerp Guild of St Luke as a ‘master’s son’. On 14 February 1627 he married Anna van Woelput. On 31 December 1649 he was registered as no longer living in the city, so for a period in 1650 he must have lived elsewhere.

Most of van Uden’s works are constructed according to the same plan. The foreground usually has a small bank topped by a few slim birches or other tall trees with transparent foliage; the trees are typically arranged in small groups and are all very straight except for one, which inclines crookedly, usually towards the centre of the panel. In the centre are peaceful fields and meadows, with hamlets, small ponds with reflections of trees and clouds, shrubs and bushes or rows of trees with thick, round foliage. In the background are mountains, which, unlike those in the paintings of many of his predecessors, are not in the least ominous. The colours are rather pale, principally dull green, pinkish brown and the yellow tone of the sunbeams, and the whole is bathed in a silvery green haze. Van Uden often depended on David Teniers for the figures, as can be seen from a number of paintings with both his signature and Teniers’s monogram (e.g. Landscape with Dancing Peasants; Dublin, National Gallery). Most often, however, the staffage—shepherds, walkers, peasants at work, gipsy girls telling fortunes—was van Uden’s own work, frequently influenced by Teniers and Rubens.

Van Uden’s careful attention to detail, particularly noticeable in the smaller works, and his search for decorative elements in the larger paintings - for example his contrasting of dark, cool zones with clear, warm ones - place him in the same tradition as Jan Breughel I and Joos de Momper II. Another artist who played an important role in the development of his art was Rubens. Van Uden made a number of more or less literal copies of compositions by Rubens (e.g. Landscape with Ulysses and Nausicaa; Barnard Castle, Bowes Museum, after Rubens’s painting in Florence, Pitti); elsewhere he reworked compositions to form new ones with a pronounced capriccio character. He also introduced Rubensian elements into many of his own works: a woman carrying a round jug on her head and cows at a watering place, for example, or such stylistic devices as foreground trees lit from behind with the tips of the branches highlighted with yellow-orange touches. But van Uden’s paintings lack the grand, broad and synthetic vision that characterizes the work of Rubens, and the reduction of the rich Rubensian colours to a monochrome green tends to make the paintings look somewhat dry. On the other hand, he achieved a certain grace, intimacy and tenderness in them. He seems to have lacked the strength to develop a personal style that deviated from the paths opened up by Breughel, de Momper and Rubens. His greatest individual talent is shown in his observation of nature, as revealed in such drawings as the Landscape with Rock Face (Berlin, Kupferstichkabinett) and a few straightforward paintings such as the Landscape with a Gipsy Girl Telling Fortunes (Berlin, Gemäldegalerie), made jointly with Teniers. 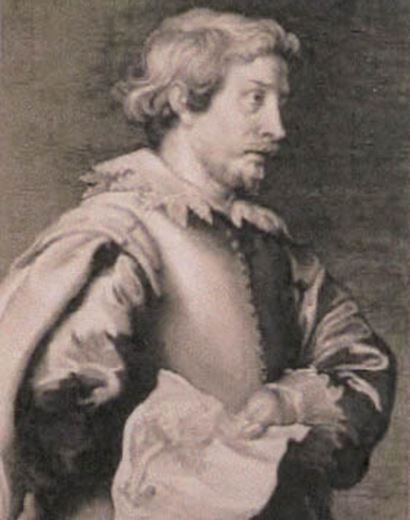