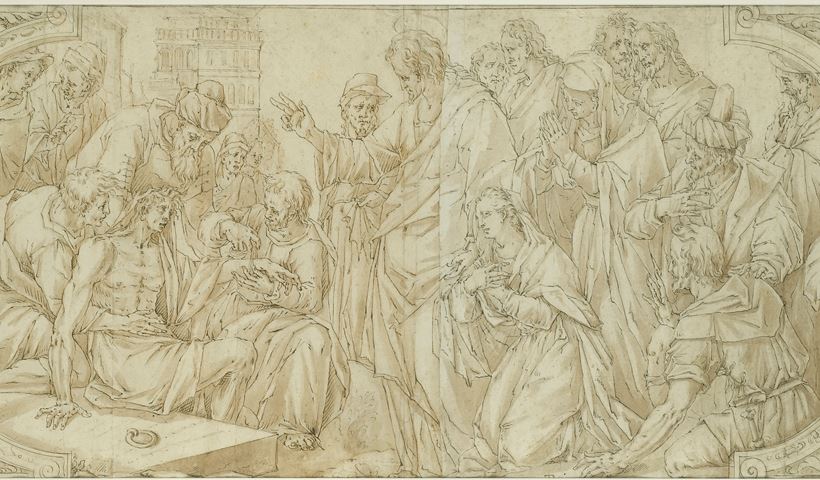 The Raising of Lazarus

The Raising of Lazarus

Christoph Schwartz was the son of a Munich goldsmith, Conrad Schwarz ( fl 1540s), and was apprenticed to Hans II Bocksberger from 1560 to c. 1566. In 1568 he worked on festive decorations for the marriage of Prince William (later Duke) of Bavaria and Duchess Renata of Lorraine together with Hans Mielich (1516–73), the master in charge, and Hans Ostendorfer II (d c. 1570). He also assisted Mielich on paintings for the high altarpiece (1560–72; in situ) of the Liebfrauenkirche, Ingolstadt. In 1569 he was awarded his master’s certificate and citizenship of Munich. Between 1570 and 1573 he was in Italy, mainly in Venice, though he did spend some time in Padua with Lambert Sustris. After his return in 1573 he was first appointed Town Painter in Munich and the following year court painter to Duke Albert IV, as Mielich’s successor. The façade paintings praised by Sandrart on the merchant’s house at Kauffingerstrasse 4 (Rape of the Sabine Women, drawing; Stuttgart, Staatsgalerie), on the Senger brewery in Burgstrasse and elsewhere, partially known through drawings made after them, were executed in this period. In the 1570s he also depicted subjects from Classical mythology (e.g. the Rape of Proserpine; Cambridge, Fitzwilliam Museum) and painted portraits.

During Duke William V’s reign (from 1581) Schwarz became the Bavarian court’s favourite painter of religious pictures (e.g. Crucifixion; Munich, Alte Pinotek); these included altarpieces, small devotional pictures and collectors’ items, often painted on copper. He decorated the interior of the Duchess’s private oratory at the Residenz in Munich, using canvas panels, as was the custom in Venice, to form ceiling pictures and employing foreshortened perspective (parts in situ, heavily overpainted). In 1581 he painted a winged altarpiece (on loan to Nuremberg, Ger. Nmus.) for the student congregation of the newly built Jesuit school. Although Schwarz’s personal relations with Friedrich Sustris were always tense, the artists’ styles gradually grew closer. In 1585 Schwarz was in Augsburg where he painted altarpieces for chapels in SS Ulrich und Afra (e.g. a Crucifixion; in situ) and for the former Jesuit church (Virgin Enthroned above the City of Augsburg; Munich, Alte Pinotek., on loan to Munich, St Anna im Lehel), working for members of the Fugger family. Emperor Rudolf II then endeavoured to obtain Schwarz’s services as a court painter. Though William V refused to release him, he was allowed to work in Munich on pieces for the famous imperial Kunstkammer in Prague, and several pictures by him are mentioned in its early inventories.

In the 1580s Schwarz enjoyed special status at court in Munich as a painter of devotional pictures, portraits and miniatures. He was commissioned to do the high altarpiece for the Jesuit Michaelskirche in Munich (Fall of the Angels, 1587–9; in situ) and was thus able by and large to remain aloof from collaborative ventures directed by Sustris, such as the interior decoration of the Grottenhof at the Residenz. Another indication of his standing is that when Hendrick Goltzius visited Munich in 1591 he drew a portrait of Schwarz (untraced). The portrait (Munich, Staatliche Graphische Sammlung) executed on his death by Engelhard de Pee (c. 1540/50–1605) has survived, inscribed with the exact date. Engravings by Jan Sadeler I and Aegidius Sadeler II, Lucas Kilian and others, and above all the approval expressed by Sandrart, kept the reputation Schwarz had enjoyed in his lifetime alive well into the 18th century. He had considerable influence on the Bavarian artists who came after him—Hans Krumper, Georg Pecham, Christoph Zimmermann (c. 1575–1639) and others. He was one of the main practitioners of the Venetian manner in south German painting in his day and in that respect was a forerunner of the Baroque style of Johann Rottenhammer the elder.