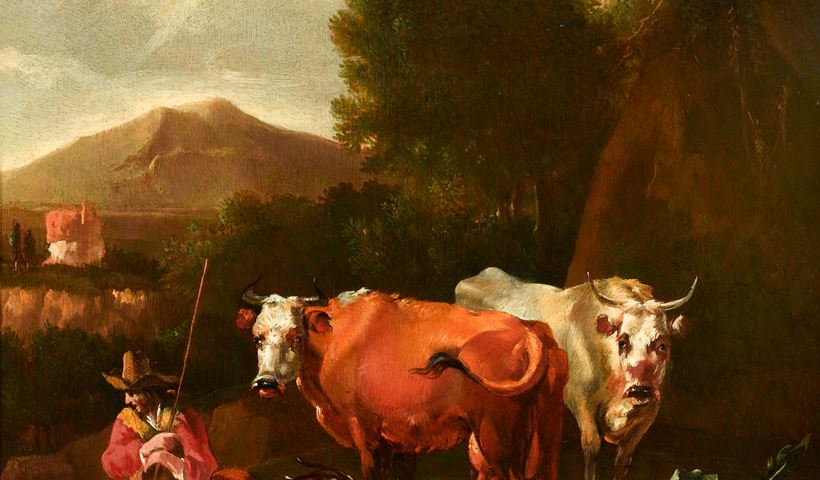 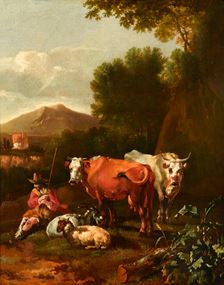 Begeyn was a Dutch painter and draughtsman. In 1655 he became a member of the Guild of St Luke in Leiden, and subsequently worked extensively in the Netherlands, England and Germany. From 1688, Begeyn was court painter to Frederick III, Elector of Brandenburg (later Frederick I, King of Prussia).
Begeyn lived at a time when there was a great public interest in topographical pictures, and he is mainly known for his views of villages and towns and for his Italianate landscapes and southern seaports. Some of the drawings he executed during his travels in Holland and Germany were reproduced in prints, such as the drawings made of the House Honselaarsdijk, which were etched by Abraham Blooteling. For the Elector he most notably made a series of drawings of Cleves and of Regenstein (1697), which he later used as preliminary studies for paintings.
In his Italianate landscapes, Begeyn was a very close follower of Nicolaes Berchem, who, according to Houbraken, was his teacher. Monumental landscapes, with large rocks and ruins in the foreground and the landscape gradually receding in the background, were inspired by paintings made by Berchem around 1660. Another favourite theme, also influenced by Berchem, was of a southern coast or seaport, with oriental merchants, richly dressed Dutch couples and lively animals in the foreground. Some of Begeyn’s works are difficult to distinguish from Berchem’s work, and sometimes motifs or entire compositions are copied from Berchem, as in Begeyn’s Italian Coast (1659; Brussels), an exact replica of the composition of Berchem’s Harbour Landscape. It is not known whether Begeyn visited Italy; he may have done so in the company of Otto Marseus van Schrieck, who specialised in painting plants, herbs, insects and small reptiles in a highly detailed, ‘encyclopedic’ manner. The foreground details of some of Begeyn’s landscapes seem to have been influenced by this style. Begeyn gradually paid more attention to the ruins and architecture in his works than to the figures. (Van Gool especially praised his knowledge of perspective.) Johannes Lingelbach sometimes painted the figures for Begeyn, as in Peasants with Cattle near a River (London, National Gallery; formerly attributed to Berchem). Begeyn was killed in Berlin, when he fell from scaffolding where he was working.