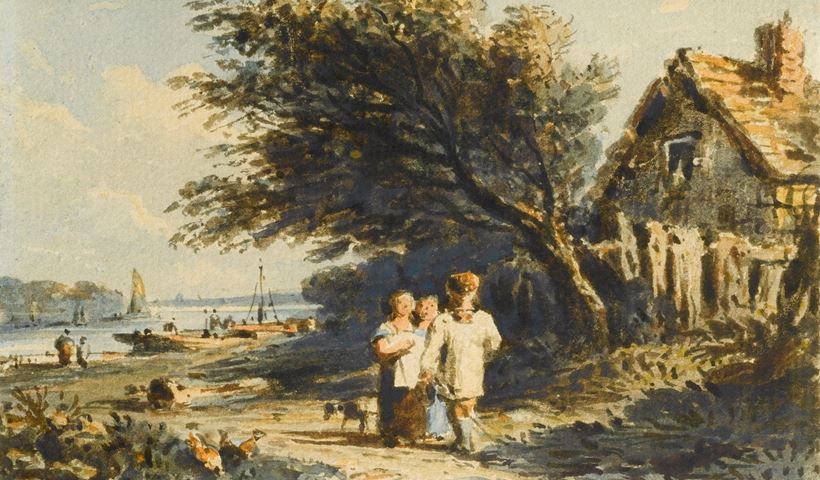 Figures on a path by the Thames 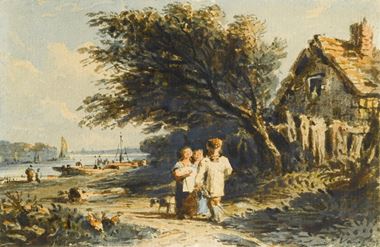 Figures on a path by the Thames

At the age of 15, John Varley attended an evening drawing school in Holborn, London, run by J. C. Barrow. Throughout his career he worked primarily in watercolour. His first exhibited work was a View of Peterborough Cathedral (exhibited at the Royal Academy, 1798). In between sketching expeditions to Wales (1798 or 1799, 1800 and 1802) and Yorkshire (1803) he executed topographical views of towns—particularly of half-timbered buildings in Hereford, Leominster, Conway and Chester—drawn in the picturesque idiom of the late 18th century. From 1800 until as late as 1820 he attended evening classes at Dr Monro’s ‘Academy’ in London and also visited Monro’s cottage at Fetcham, Surrey. In company with Monro he executed the watercolour View from Polsden, Surrey (1800; Newcastle upon Tyne, Laing Art Gallery), which shows the influence of Thomas Girtin. This painting is inscribed Study from Nature, an inscription that recurs on some of his work as late as 1831.

Varley’s early watercolours have been seen as his most inspired. They often combine naturalistic qualities with the influence of other artists, forming striking and original compositions, as in Sunrise from the Top of Cader Idris (1804; England, private collection), which is remarkable for its glowing light effects and owes much to J. R. Cozens; another example is Harlech Castle and Tygwyn Ferry (1804; Paul Mellon private collection), in which the broad, unmodulated wash layers resemble the contemporary work of J. S. Cotman, with whom Varley became acquainted in 1802 at meetings of the Sketching Society.

In 1805 Varley became a founder-member of the Society of Painters in Water-Colours. His contributions to its early exhibitions furnished ‘the very backbone of its landscape art’ (Roget). In the ensuing years he wished his watercolours to rival oils and they became larger, more varied in technique and more aspiring in content. Varley helped to create this taste and increasingly adapted his work to suit it, for example Suburbs of an Ancient City (1808; London, Tate).
As Varley became more prolific, exhibiting about 20 watercolours a year (he had a large family to support, having married in 1803), he increasingly worked to a formula, often painting Welsh scenes interpreted through the eyes of the Old Masters, for example Landscape with Harlech Castle (c. 1825; London, V&A).

Varley’s finest and most characteristic watercolours date from the early years of the Society of Painters in Water-Colours, c. 1805–20. They are models of those ‘clear skies, distances and water’ that he claimed ‘are the beauties most sought after in the art of watercolours’. Such features are often best seen in the watercolours of a long horizontal format, which he first adopted after his trip to Northumberland in 1808, for example the Distant View of Bamburgh Castle, Northumberland, and Holy Island. Such broad and luminous works contrast with his later ones, which from 1837 were executed on coarse paper and more densely painted, using deep blues, purples and pinks over a brown ground (cologne earth), often with gum (e.g. London, V&A). He also worked with the Patent Graphic Telescope invented by his brother.

Varley was a gifted and successful teacher, renowned for his phenomenal enthusiasm and engaging personality. He wrote a number of drawing manuals, mainly intended for the amateur, in which he explained the value of tints and set out rules of composition, many of which are evident in his own work. His pupils included William Henry Hunt, William Mulready, John Linnell, David Cox, Copley Fielding, Peter De Wint, Francis Oliver Finch and Samuel Palmer, all of whom he encouraged to sketch from nature. In 1818 Linnell introduced Varley to William Blake, who, for Varley’s benefit, drew his famous visionary heads in two of Varley’s sketchbooks; some of these, including the Head of the Ghost of a Flea, were engraved by Linnell for Varley’s Treatise on Zodiacal Physiognomy (1828), a publication that reflects Varley’s life-long interest in astrology. Despite his success as an artist and teacher, Varley was always short of money and spent much of his later life in debtors’ prison.

Collections
Varley is represented in the following collections: Victoria and Albert Museum, London; Tate, London; Laing Art Gallery, Newcastle upon Tyne, amongst others.