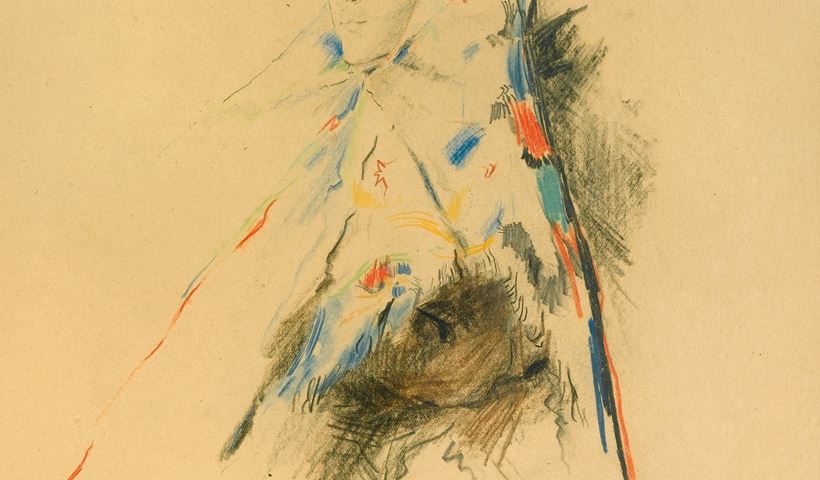 A Peasant Girl in a Colourful Shawl 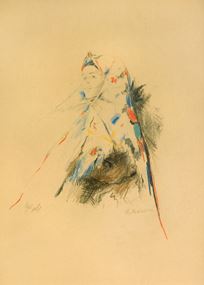 A Peasant Girl in a Colourful Shawl

Philip Andreyevich Maliavin was born in 1869 in a large village of Kazanki (Samara Province, now the Totsk District, Orenburg Region). Hardly any of the peasants could read and write. Philip’s artistic nature manifested itself at an early age. Traveling monks used to bring with them icons from Mount Athos, which made a great impression on the boy. Philip dreamed of going to Athos to learn icon painting, but his parents were against this, claiming that learning was not for peasants. He insisted, and finally managed to get their unwilling consent. At the age of sixteen he set out for Greece in the company of a monk from Athos, who has been to Kazanki on a visit. The money for the road was collected for him by the villagers.

The monasteries of Mount Athos were famous for their rich collections of Greek manuscripts and printed books. To Maliavin’s disappointment, icon painting as an art was not practiced there; only copies were made from models arriving from Russia. Philip entered the monastery as a novice and was made responsible for painting murals and icons, with nothing but his own efforts to teach him the secrets of the craft.

Very little of his early work has survived. He showed great talent and aimed essentially at an accurate rendition of nature. He then met Vladimir Beklemishev, sculptor and professor at the Petersburg Academy of Arts, who visited Mount Athos in 1891 and was deeply impressed by the works of the young self-taught painter.

In March 1892 Maliavin went to St. Petersburg for professional training. With the support of Beklemishev he was admitted to the Academy and enrolled as a private student. The studios were headed by such great artists as Ilya Repin, Vladimir Makovsky and Arkhip Kuinji. Maliavin applied for a place in Repin’s studio, who was the teacher of painters such as Igor Grabar, Konstantin Somov, Anna Ostroumova-Lebedeva, Boris Kustodiev, Isaac Brodsky, and Dmitry Kardovsky. It was whilst in Repin’s studio that Maliavin created the best of his early paintings. Peasant girl knitting a stocking is a work of this period, a large-scale study with a great deal of air and sunlight. This work is the first of Maliavin’s canvases in which red, his favorite colour, sounds its triumphant note. Three early works painted by Maliavin (the other two – also images of peasant women) were displayed at Moscow Art Lovers’ Society Salon, and were bought by Pavel Tretyakov for his Gallery.

Another series of works created during Maliavin’s early period were portraits of his fellow students from Repin’s studio. Amongst these was his well-known portrait of Konstantin Somov, a future founding member of the "World of Art" group.

Only four years had passed since the novice from Mount Athos has arrived to St. Petersburg, and he was participating in the Metropolitan exhibitions, his paintings bought by Pavel Tretyakov for his celebrated gallery, and his name all over the newspapers and magazines. This made Maliavin greatly sought after by rich patrons wishing to have their portraits painted, such as Mme. Popova and the Baroness Wolf.

The years 1895 to 1899 were a period of especially intense productivity. Maliavin’s painting style was unconventional – too bright and riotous for contemporary taste. In 1897 Maliavin received the status of Artist, but it was granted him after much debate, and not for his competition painting but for some of his portraits, which were also on display. In 1900 he went to Paris, where the French newspapers call him “a credit to Russian painting” and he was awarded a gold medal. The Museo d’arte moderno in Venice acquired his work Laughter: the painting was perceived as a symbol of the new art.

On his return to Russia, Maliavin married Natalie Novaak-Sarich, a private student at the Higher Art School and daughter of a rich Odessa industrialist, and the young couple settled in a village near Riazan. His works appeared in the Salons of the World of Art group and the Union of Russian Artists (AKhR). His paintings with generalized titles like The peasant girl or The peasant woman were portraits of specific individuals. The paintings’ charm lies in their use of colour and epic scale. Colour fills the paintings and creates a dynamic effect of upward movement.

From 1905 to 1907, during Russia’s revolution crisis, Maliavin was immersed in his “peasant” canvasses. In 1906 he created The whirlwind, considered his greatest painting. The Assembly of the Academy of Arts accords him the rank of Academician “in consideration of his fame in the field of art”.

From 1908 to 1910 no work of his appeared at exhibitions. The attacks of official art critics on Maliavin’s work were becoming more and more frequent. Maliavin went abroad for a long stay in Paris. After his return to Russia, he painted a large family portrait, which was displayed in 1911 at the Union of Russian Artists (AKhR) Salon, but the canvas shocked and disappointed viewers. In 1911 to 1915 Maliavin only displayed drawings and canvases of the previous period. The Revolution of 1917 brought change in every sphere of the economical, political, social and cultural life of the country.

In 1918 he and his family moved to Riazan. The painter took an active part in the propaganda of art under the auspices of the Riazan Commissariat for Education.

In 1920 Maliavin went to Moscow and plunged into the capital’s artistic life. He was admitted to Kremlin, where he made drawings for the portrait of Lenin, and painted a portrait of Anatoly Lunacharsky. Maliavin’s works were displayed at Moscow exhibitions. In the autumn of 1922 Maliavin went abroad with his family to organize a personal traveling exhibition of his work. His family settled in Paris. He painted portraits upon commission and his works were displayed at Parisian exhibitions (1924). In 1933 he toured Yugoslavia, Czechoslovakia, England and Sweden with exhibitions of his works. In 1935 and 1937 he held solo exhibitions in London, Stockholm and Nice.

Collections
Maliavin's work is represented in the following collections: Tretyakov Gallery, Moscow; National Gallery of Armenia, Yerevan; amongst others.