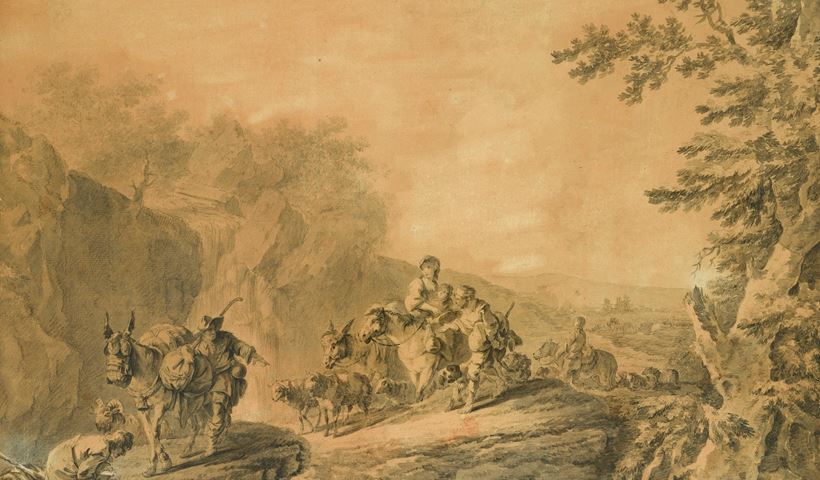 A Shepherd’s Family Travelling with their Flock 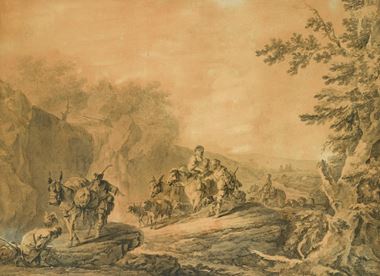 A Shepherd’s Family Travelling with their Flock

Casanova was born in London, where his parents were touring, and spent his youth in Venice. The influence of Venetian art was an important feature of his work. In the Mémoires of his brother Giovanni Giacomo Casanova, it is said that in Venice he studied drawing with Giovanni Antonio Guardi during a 10-year period ending around 1749. The Fortune-teller (c. 1749; Rome, private collection) may be among Francesco’s earliest surviving works. In Venice he made copies after the work of the history and battle painter Francesco Simonini who probably taught him in Florence from around 1749. Two years later he moved to Paris but in 1752 left for Dresden, where he came into contact with the work of Charles Parrocel and Philips Wouwerman.

In 1757 Casanova returned to Paris where, according to the Mémoires, he exhibited a picture at the Louvre, and rapidly became a much sought-after court painter of battle, hunting and equestrian scenes. Around 1760 he executed Surprise Attack on a Wagon (Moscow, Pushkin Museum of Fine Art) and the Camp (Schleissheim, Neues Schloss). Between 1761 and 1771 he exhibited at the Salon to much critical acclaim. On his marriage certificate of 1762 he was designated ‘Peintre du Roi’, a position he retained until 1783. He became a member of the Académie Royale de Peinture et de Sculpture in 1763, and paintings from this period include Landscape with Shepherds (c. 1770; Musée des Beaux-Arts, Béziers) and two pictures executed for Louis-Joseph, Prince de Condé (1736–1818), shown at the Salon of 1771— Battle of Lens and Battle of Fribourg (both c. 1771; Paris, Louvre). By about 1772 he had begun designing tapestry cartoons for the royal factories in Beauvais and Aubusson, including the fragment representing a Kneeling Man (c. 1772; Paris, Louvre) and the study of a Fishing Scene (early 1770s; St. Petersburg, Hermitage). Between 1779 and 1783 he continued to exhibit at the Salon and executed, for example, Landscape with Rider (1780; Moscow, Pushkin Museum of Fine Art).

In 1783 Casanova settled in Vienna. His paintings from this period include the Equestrian Portrait (c. 1783; Museum of Chorherrenstiftes, Klosterneuburg) and Cavalry Battle (1792; Kunsthistorische Museum, Vienna). During the early 1790s he was probably commissioned by Catherine II of Russia to paint a cycle of pictures representing the Russian Victory over the Turks, with which some preparatory studies (Vienna, Albertina) may be associated. In 1795 he travelled with Prince Nicolas Esterházy to Hungary, where he is said to have executed numerous equestrian sketches, and in 1797 he completed paintings for Ferdinand IV, the Bourbon King of Naples (1759–1825), including Fox Hunting (Naples, Capodimonte). His most significant pupil was Philippe Jacques de Loutherbourg, who studied with him in Paris.