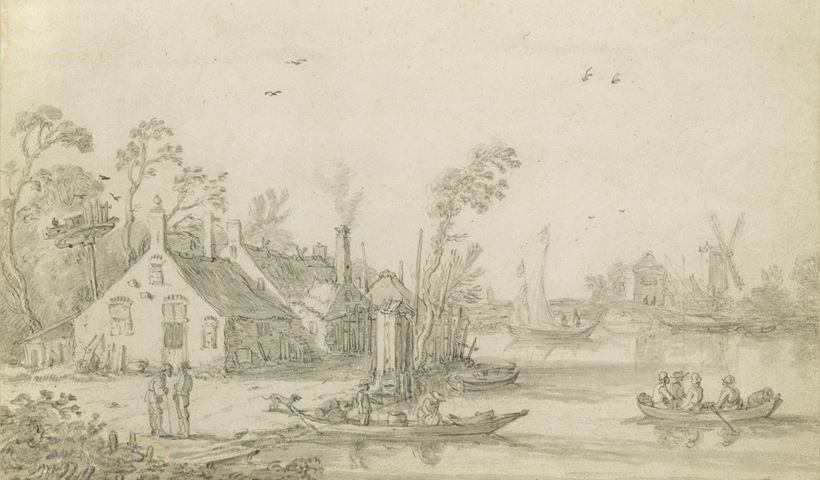 A River Scene with Rowing Boats, Cottages on the Shore and a Windmill in the Distance 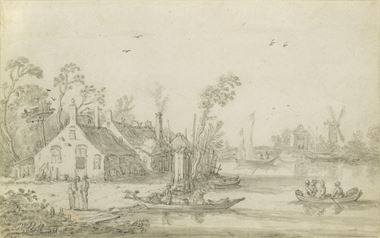 A River Scene with Rowing Boats, Cottages on the Shore and a Windmill in the Distance

Esaias van de Velde probably received his earliest training from his father Hans and possibly the Antwerp painter Gillis van Coninxloo, who moved to Amsterdam in 1595 (ten years after Esaias’s father). He may also have trained with David Vinckboons, whose work shows similarities with that of Esaias. Esaias became a member of the Haarlem Guild of St Luke in 1612, the same year as Willem Buytewech and the landscape painter Hercules Segers. During this Haarlem period Esaias had two pupils, Jan van Goyen and Pieter de Neijn (1597–1639), but by 1618 he had moved with his family to The Hague, where he joined the Guild of St Luke in October of that year.

Esaias left an extensive painted oeuvre of over 180 pictures, 117 of which are landscapes. He signed his paintings in two different ways: in the early period (c. 1614–16) E Van Den Velde; in the later period simply E. V. Velde. However, a clear chronological dividing line between the use of the two signatures cannot be drawn.

The work of Esaias’s predecessors Coninxloo, Vinckboons and Roelandt Savery represents the last of the Mannerist tradition, in which landscapes were constructed in a fantastic and unrealistic manner, showing turbulent and hilly scenes from a low point of view so that the sky or the horizon almost disappears. The German painter Adam Elsheimer, whose work became known in Holland through reproductive prints, offered a new alternative: simple compositions—often with a strong diagonal—and a tighter conception of the individual forms achieved by means of clear outlines and the use of chiaroscuro. Such a concept of landscape was truer to nature and became the point of departure for Esaias’s own landscapes. The earliest known examples, Winter Landscape (1614; Cambridge, Fitzwilliam Museum) and Riders in a Landscape, were executed in Haarlem and already show his characteristic low horizon, a landscape articulated by a diagonal river course, vertical framing groups of trees and horizontal elements. The colouration is tonal, uniform and undramatic; Esaias’s striving after a realistic recreation of the Dutch landscape in all its monotony can already be clearly sensed in this early picture.

The incidental character of that early landscape is even more evident in the View of Zierikzee (1618; Berlin, Gemäldegal Musuem), in which the silhouette of the city of Zierikzee is captured as a play of masses and outlines under an open sky, without framing devices on either side. The bold realism of this little picture from the beginning of Esaias’s Hague period is unmatched in his oeuvre. The colouring, with a series of fine greenish, blueish and brownish tones, composed from myriad tiny flecks of paint, foreshadows the dissolution of form that was to be the most important innovation of Dutch landscape painting later in the 17th century: the effect of the ambient air on the appearance of objects.

In the 1620s Esaias occupied himself primarily with three types of landscape: the dune and coastal landscape, the river landscape and the hilly or fantasy landscape. Only the coastal landscapes build on the accomplishments of the earlier Haarlem pictures. His river landscapes show the most compositional experimentation: the idyllic central composition of The Ferry (1622; Amsterdam, Rijksmuseum) depicts a gently bending river framed in the foreground by trees. The drawing Boat Moored before a Walled Farm (1623; Brighton, Art Gallery & Museum) shows a variation of this theme, in which the river course is pushed to one side of the picture. The extensive use of chiaroscuro to define the composition is a new development in the art of the Dutch landscape. Jan van Goyen took up this compositional principle and made it the foundation of his own work. Esaias’s third type of landscape picture, the so-called ‘hilly landscape’, represents the most traditional and academic aspects of his work.

The imaginary landscape is fundamentally un-Dutch in character and originates in part from the works of Coninxloo and the Frankenthal school artists. The contemporary academic definition of landscape derived from van Mander’s Schilder-boek (1604), where landscape was defined as an autonomous pictorial genre for the first time. The work of Savery and the Dutch Italianates must also be considered when assessing Esaias’s fantasy landscapes. These are best represented as three types: a cliff landscape untouched by civilization (e.g. Path to the Left of Cascade Falls, 1625; Riga, Museum of Foreign Art); a mountain landscape with distant fortifications or circular Roman temples (e.g. Hilly Landscape, 1624; Prague, National Gallery, Sternberg Palace); and the panoramic landscape, which is in part developed out of the second type (e.g. Hilly Country, 1627; Copenhagen, Statens Museum for Kunst).

Esaias also painted genre and sacred scenes, most of which are set within a
landscape. Genre paintings, such as the outdoor parties (buitenpartijen), date from the years 1614–24 and reflect the influence of Mannerism (e.g. Garden Party before a Palace, 1614; The Hague, Mauritshuis). Many of these banquet pictures are also intended to be read as moralizing representations of the Prodigal Son, or the theme of love for sale may be intended. The iconography of the Five Senses also plays a role in the composition. Often the landscape in these works dwarfs the foreground figures, even those with religious content; the figures become purely staffage before a landscape that is sometimes fantastic, sometimes purely Dutch (e.g. Christ and the Canaanite Woman, 1617; New York, Private Collection). These pictures also frequently have the character of an interior scene, with the narrative action pushed sharply into the foreground of an enveloping coulisse of trees, recalling the work of Elsheimer.

In the 1620s Esaias is documented as collaborating with the architectural painter Bartholomeus van Bassen (1590-1652), for whose interior scenes Esaias painted the figures and also the representations of ‘pictures within the picture’. Together they worked on licentious genre subjects but also on ostentatious interiors with religious themes or ecclesiastical interiors. A rich interior that is typical of van Bassen’s collaboration with Esaias is found in the painting Sumptuous Interior with Banqueters (Amsterdam, Rijksmuseum), which shows a room with exceptionally rich furnishings including a coffered ceiling, marble-tiled floor and leather wall-hangings. Esaias’s figures enliven these grandiose interiors and present a parallel to the garden parties and banqueting scenes in their selection of dramatis personae. The moral content of the interior scenes is underlined through the choice of the pictures within the picture, which are to be understood as providing a contrast to the loose conduct of the characters. Esaias also peopled van Bassen’s magnificent church interiors, and here as well the actions of the figures are not casual, but carefully composed and subordinated to a higher didactic content (e.g. Interior of a Renaissance Church, 1626; The Hague, Mauritshuis).

The pictures produced by van de Velde and van Bassen were highly prized in their time: the collector Cornelis Cornelisz. van Leuwen of Delft, for whom an entire series of such pictures was painted, paid between 100 and 160 guilders per work. About 30 or so paintings survive from this collaboration. Esaias also provided the staffage for landscape paintings by other artists.

Esaias’s graphic work is as extensive as his paintings, with over 200 secure attributions recognized today; its development mirrors that found in his paintings. Drawings from his Haarlem years, such as the View of Spaarnewoude (Amsterdam, Rijksmuseum), have a rigid construction with sharply outlined forms, whereas landscape drawings produced after his move to The Hague, for instance River Landscape with a Ferry (c. 1625; Chantilly, Museé Condé), are experimental in nature, with the river no longer the centre of the composition, but to one side.

Esaias was also active as an engraver and etcher, and c. 120 prints by him are known. In these works the strokes are short and straight, and changes in direction are conveyed in short breaks and intervals rather than curves; often a few strokes firmly laid down suffice to achieve the desired painterly effect. In the place of the older, more volumetric mode of representation, Esaias employed a planar, painterly mode as the decisive means of expression.

In addition to landscapes, Esaias van de Velde also painted genre and military paintings. He died in The Hague in 1630, where he had been Court Painter to the Prince Maurits and Frederick Henry. His students included Jan van Goyen and Jan Asselyn. A cousin of Jan van de Velde the younger (1593-1641), Esaias was no relation of the family of Willem van de Velde (1611-1693).