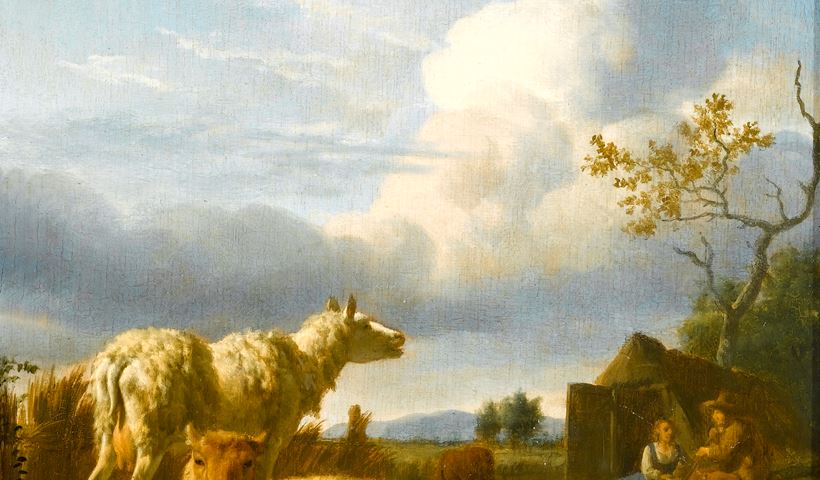 Pastoral Landscape with Sheep and Peasants 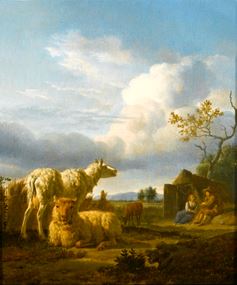 Pastoral Landscape with Sheep and Peasants

Adriaen van de Velde was a Dutch painter, draughtsman and etcher and the son of Willem van de Velde I. According to Houbraken, he first studied in Amsterdam with his father; however, unlike his father and his brother, Willem van de Velde II, Adriaen did not incline towards marine painting, so he was sent to Haarlem to complete his training with the landscape painter Jan Wijnants. By 1657 Adriaen had settled in Amsterdam, where various documents regularly record his presence until his death. During a career of less than two decades, van de Velde produced an extensive and varied body of paintings, drawings and prints. Meadows and Italianate views with herdsmen and their cattle make up the bulk of his oeuvre, although—as far as is known—he never travelled to Italy. He also painted beaches, dunes, forests, winter scenes, portraits in landscape settings, at least one genre piece (Woman Drinking, 1662; ex-Gemäldegalerie für Alte Meister) and a few historical pictures. His earliest known works are six etchings of 1653, and dated paintings survive for every year from 1654 to 1671. Pastures with cattle and herders predominate in his work of 1653–8. The paintings and prints of these years reveal no trace of Wijnants’s influence. Instead, the young van de Velde emulated the art of Paulus Potter and, to a lesser extent, that of Karel Dujardin.
Potter’s example informs not only Adriaen’s choice of the cattle-piece as his preferred subject, but also his depiction of the meadow landscape, the tight, precise technique he employed to paint grass, foliage and fur, and the hard, cool sunlight that pervades pictures of the mid-1650s. Warmer hues and a softer, yellower sunlight—a response to the works of the Italianate painters Dujardin, Nicolaes Berchem and Jan Asselijn—entered van de Velde’s pictures about 1658, and, at the same time, he began to engage a broader range of landscape subjects. A farmyard (London, National Gallery) and two forest scenes (London, National Gallery, and Frankfurt am Main, Städelsches Kunstinstitut & Städtische Galerie), all conspicuously indebted to Potter, date from this year, as does the Riding School (Raleigh, NC Museum of Arts), based on similar depictions of equestrian subjects by Dujardin.
Also from 1658 is the brilliant Beach at Scheveningen (Kassel, Schloss Wilhelmshöhe), the most original and harmonious of van de Velde’s rare beach scenes. Unlike the monochromatic atmosphere of most contemporary views of the Dutch coast, van de Velde suffused the entire scene with a warm sunlight that deepens the shadows and catches the figures’ vivid colours against the rich browns of the sand and greys of the sea. This luminosity and pronounced local colour, adapted from the Italianate painters’ evocation of Mediterranean light, eventually extended to Adriaen’s pictures of Dutch pastures, woods and dunes, as well as to his own Italianate views.
Due to his skill in painting figures and animals, van de Velde was frequently employed to add staffage to pictures by fellow landscape artists, including Jacob van Ruisdael, Meindert Hobbema. As early as 1664 an inventory lists paintings by Wijnants and Moucheron gestofferd door Adriaen van de Velde, and Adriaen’s contribution to these collaborative efforts demonstrably increased their market value.
One of the most gifted and versatile 17th-century Dutch draughtsmen, van de Velde is also one of the few landscape painters of the period whose method of design can to some degree be reconstructed. His numerous surviving drawings include landscapes sketched from nature, compositional ideas for paintings and prints, cattle drawn from life and nudes and other figures executed from studio models. Van de Velde used three types of preparatory study for his paintings. He began with a preliminary compositional sketch, in which he summarily jotted down the broad outlines of the design. From this first idea he produced a second, fully resolved and detailed drawing of the whole composition. Although not transferred directly to the canvas or panel, this second design served as the model for the finished work. In addition, he made chalk studies from life for the principal figures and animals in his pictures.
Van de Velde’s activity as a printmaker was concentrated in the years 1653, 1657–9 and 1670. Most of his 28 etchings depict farm animals. The finest are distinguished by their forceful draughtsmanship and the masterful evocation of strong light and deep shadows on the solid flanks of grazing and resting cows. While the subject-matter and design of his prints was suggested by the work of other etchers of animal subjects (e.g. Potter, Dujardin and Berchem), van de Velde’s brilliant use of the etching needle at once emulates and surpasses Dujardin’s technique. 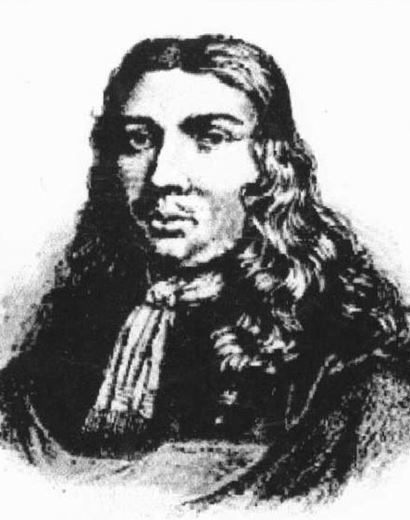