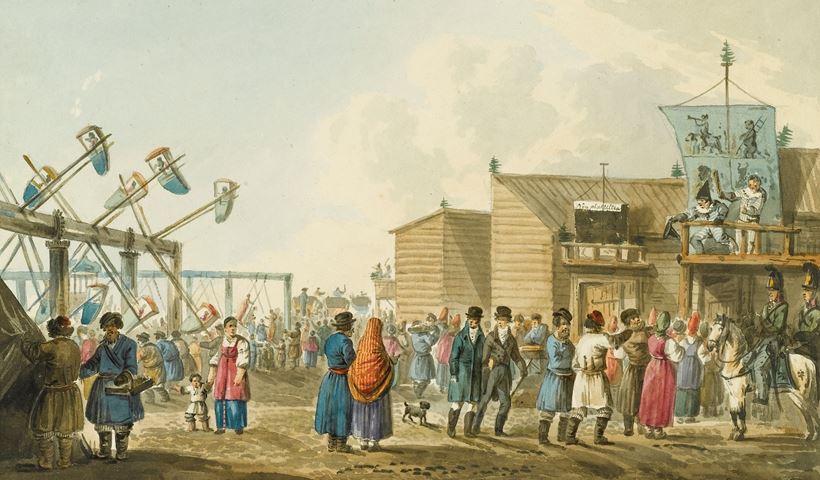 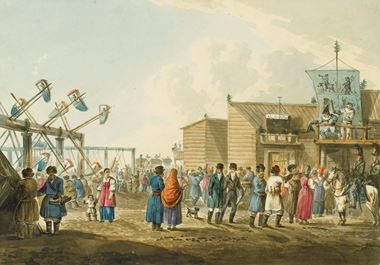 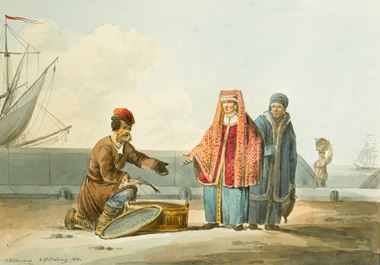 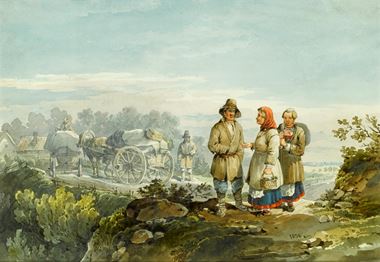 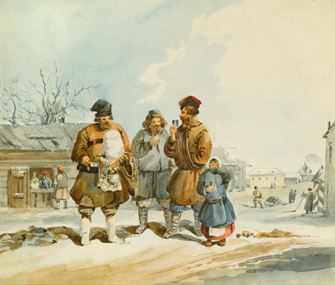 The Bread Seller & The Kvas Vendor

In this collection of works, Karl Ivanovich Kollmann takes inspiration from scenes of everyday Russian life, from baptisms to roadside scenes. The result is an intimate and wide-ranging collection of views of life in nineteenth-century Russia, preserved in well-executed watercolours.

The rural poor were seen as living in the bliss of ignorance with their agrarian existence which avoided the pressures and toil of industrialised life. This idea of ignorance was linked with the notion of the noble savage, which expresses a concept of a universal essential humanity unencumbered by civilisation. The peasants pictured were of course subject to the norms of conventional society, but their agrarian lifestyle made them closer to this ideal than those living in cities or in higher social strata.

The images themselves are wonderfully executed, capturing all elements of Russian life. Some of the works, including The Kvas Vendor and The Bread Seller and A Russian Peasant Selling Fish, show simple tradesmen, selling a variety of food and drink. These figures are clearly from the lower classes of Russian society, dependant on a single product as a source of income. Although Kollmann depicts their lives as poor, with details such as the small trestle table in The Bread Seller emphasising their humble circumstances, the figures are not suffering in their poverty. So many images with similar subjects could become dry and repetitive, but Kollmann’s skill is his power of observation, which allows him to depict the subtle variations of the trades. His genuine fascination in his subjects is clear in the way he shows the Kvas vendor expertly balancing his urn and kettle or, in the Russian Museum’s Fish and Egg Traders on an Embankment, (The Russian Museum, St. Petersburg) a figure carrying his large, round, shallow basket on his head.

Kollmann’s watercolours often focus on the conversations and interactions of everyday life. In St. Petersburg Itinerants, a man asks for directions in a strange new city, and in Coachmen outside the Cathedral of the Mother of God of Kazan, St. Petersburg an argument is breaking out over prices. The nuances of these everyday conversations clearly held considerable fascination for Kollmann and his work shows an ability to expertly capture and convey the mood in these scenes.

The few of Kollmann’s works that do depict more solitary figures invariably show another feature of interest that reflects Kollmann’s status as a foreigner fascinated with the culture and traditions of his adopted country. A Russian Peasant with a Sledge is one such work, in which a Kibitka is shown prominently. As the inscription states this particular covered wagon is used to transport invalids, and this unusual sight must have captured Kollmann’s imagination.

The works shown here clearly demonstrate that Kollmann was equally adept at depicting the lives of both rural and urban peasants. The backgrounds of his watercolours are usually vague and unspecific; however, Coachmen outside the Cathedral of the Mother of God of Kazan, St. Petersburg is a rare exception and thus an important work. The cathedral was only completed nine years before Kollmann depicted it and the neo-Classical design was at the time very unusual in St. Petersburg, reflecting Emperor Paul I’s (1754-1801) ‘desire for a reconciliation with Roman Catholicism and, implicitly, to establish his capital as a new Rome’.¹ Due to its relative novelty, its magnificent, and to Russian eyes unusual, architecture and symbolic status it is easy to seen why Kollmann decided to use the cathedral as a backdrop in this work, rather than his usual practice of generic streets or landscapes.

A Russian County Fair also has a detailed background, but is an unusual work in that it presents a greater social variety than is typical in Kollmann’s work. It shows soldiers, gentlemen, street traders and peasants all gathering together in the same place, enjoying the entertainment provided by jesters and fairground rides. It has a distinctly festive atmosphere, which sets it apart from Kollmann’s usual scenes depicting decidedly everyday activities.

Kollmann’s images frequently show figures of a distinct type. Often his subjects are tall, broad-shouldered men, with thick beards and gruff demeanours, like those in many of the present works, or the Russian Museum’s Navvies Lunching. Despite his repeated use of this figure type, Kollmann invariably gives them life because of his skilful depiction of faces and his ability to capture the nuances of character.

Kollmann was born in Germany and having received an initial artistic education in Munich, moved to St. Petersburg as a seventeen-year-old and studied under his uncle, the famous etcher Ignaz Sebastian Klauber (1753-1817). In St. Petersburg he started to explore the medium of watercolour, whilst simultaneously developing a fascination with Russian folk traditions and culture that was to manifest itself throughout his career and oeuvre. His work was clearly influenced by the genre watercolours of Alexander Osipovich Orlovsky, who often depicted the daily life of St. Petersburg. Due to the skill and excellent reception of his watercolours, the Imperial Academy of Arts in St. Petersburg elevated him to the rank of Academician. Kollmann also worked as a private drawing tutor and notably acted as a draughtsman for Auguste Ricard de Montferrand (1786-1858) in the designs for the Alexander Column and the construction of St. Isaac’s Cathedral in St. Petersburg.