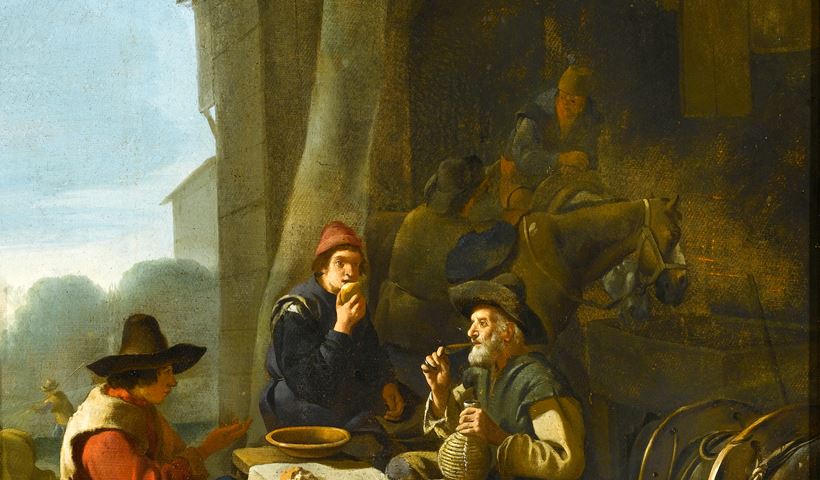 Peasants Resting Before an Inn 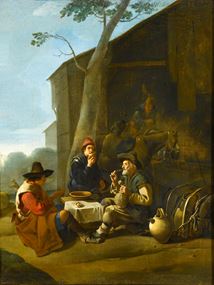 Peasants Resting Before an Inn

Lingelbach, seen here in a self-portrait wtih a violin, was German by birth but by 1634 had settled in Amsterdam with his family, where presumably he trained as a painter. According to Houbraken, he visited France in 1642 and arrived in Italy two years later. However, he is not mentioned in any document of 1644, although he is recorded in Rome from 1647 to 1649. The artist left Rome in 1650 and by 1653 was back in Amsterdam, where he remained until his death. Lingelbach is perhaps the only one of the Dutch Italianates with a catalogue of numerous signed and dated works to document his artistic development. The first two signed works are The Blacksmith (1650; Rome, Melmeluzzi private collection) and Self-portrait with Violin (1650; Zurich, Kunsthaus). Unfortunately no certain works survive from the previous years. Kren (1982) attributed a series of works depicting Roman trades, some formerly ascribed to Pieter van Laer, to Lingelbach’s early career. The original group consisted of three small paintings: the Acquavita-seller, the Cake-seller and The Tobacconist (all Rome, Palazzo Corsini). While these paintings have some striking points in common with the Melmeluzzi Blacksmith of 1650 and the signed Dentist on Horseback, 1651 (Amsterdam, Rijksmuseum). It is still uncertain whether they belong to Lingelbach’s pre-1650 work or are by another hand (sometimes called the Master of the Trades). In the Melmeluzzi Blacksmith the forms are drawn with a dry, incisive line that gives the figures an almost caricature-like air, whereas in the Roman Trades the volumes are given body by a dense, intense and mellow style of painting.

In the next few years Lingelbach painted large compositions that are his best-known works: the great Market in the Piazza Navona (Frankfurt Main, Städel. Kunstinstitute.) and the Carnival (Vienna, Kunsthistorisches Museum). These fancifully painted Roman piazzas are crowded and busy; the settings evoke a feeling of space and distance, fading more and more into memory. By comparison with the Amsterdam Dentist on Horseback, the Market in the Piazza del Popolo, (1664; Vienna), is Dutch in its language and in the figure types depicted. Northern collectors wanted an ‘impression’ of Rome, not a historically correct reconstruction of the city. Thus Lingelbach developed the ‘Italianate’ genre that was imitated by Dutch artists who had never been to Italy. Lingelbach also produced paintings of port scenes, using a similar vocabulary as this Lepanto painting, populated by a great variety of types: Turks, merchants, gamblers and pedlars. 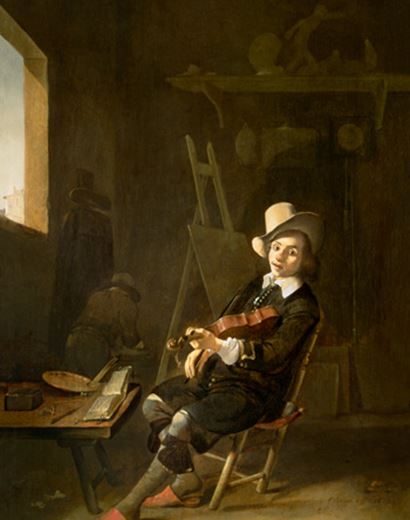