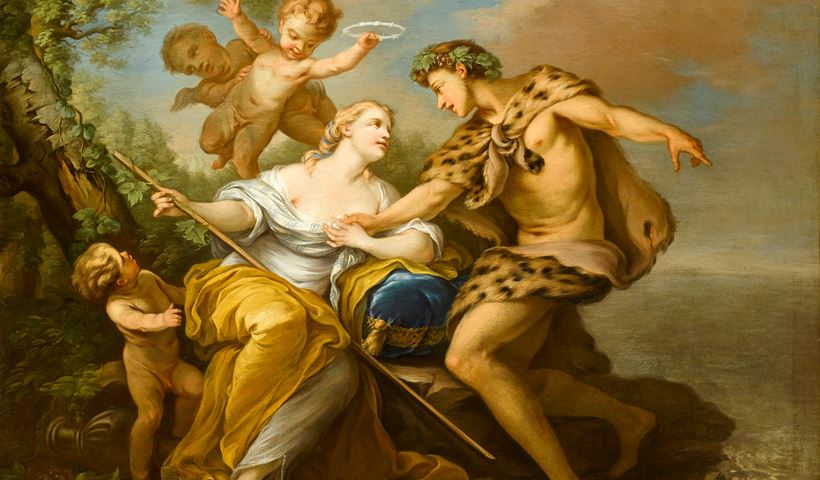 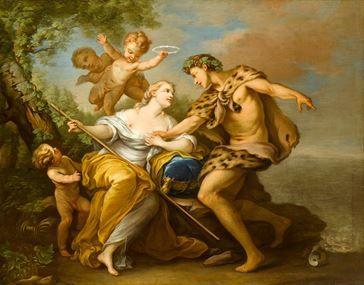 Carle was from the great Franco-Flemish dynasty of painters. He and his family were the French descendants of the genre painter Jan van Loo (b Sluis, nr Bruges, 1585).

After his father’s death in 1712, Carle travelled to Turin to join his elder brother, Jean-Baptiste, who took charge of his education. When they moved to Rome in 1714, Vanloo began formal studies with the painter Benedetto Lutti and the sculptor Pierre Legros le jeune. In 1719 the brothers moved to Paris, where the younger artist gained practical experience by assisting his brother on such commissions as the restoration of the Galerie François I at the château of Fontainebleau. He also studied at the Académie Royale, where he won first prize for drawing in 1723. The following year he was awarded the Prix de Rome, but the money that was to finance his studies in Italy was withheld, and he was forced to raise the necessary funds himself by painting society portraits and stage decorations for the opera in Paris. His few extant paintings from this period demonstrate, by their combination of Mannerist figural proportions with a fashionable Rococo palette, Vanloo’s ability to assimilate various stylistic influences (e.g. the Presentation in the Temple, 1728; Lyon Cathedral). In early 1728 he was at last able to set out for Rome, in the company of his nephews Louis-Michel Vanloo and François van Loo, and of his friend and future rival François Boucher.

In Rome, Vanloo quickly gained favour. By December 1728 one of his drawings had taken first prize at the Accademia di S Luca, and he had attracted the attention of Cardinal Melchior de Polignac, the French Ambassador to Rome, who intervened to obtain for him his long-delayed pension. While in Rome, Vanloo developed the two distinctive styles that he employed throughout his career. His small Marriage of the Virgin (1730; Nice, Musee Beaux-Arts), probably executed out of gratitude to de Polignac, exhibited a sweet, refined classicism reminiscent of Raphael and Carlo Maratti; he was also capable, as in his Aeneas and Anchises (1729; Paris, Louvre), of an altogether more dynamic, fluid style that invoked his contemporary Placido Costanzi. His most important Roman work was the illusionary ceiling fresco of the Apotheosis of St Isidore (1729; Rome, S Isidoro), which both established his reputation as a painter in the Grand Manner and set the stage for future large-scale decorations.

In 1732 Vanloo decided to return to France via Turin; by a tragic mishap his nephew François was jolted from the carriage and trampled to death by the horses. This may have been why Vanloo stayed on in Turin, where he produced some of his most elegant works in the service of Charles-Emanuel III, Duke of Savoy and King of Sardinia. Characteristic of this period is his ceiling fresco for the Palazzo Mauriziano, Stupinigi, of Diana and her Nymphs Resting (1733; in situ), a graceful and witty display of Olympians. He also decorated a salon in the Palazzo Reale with 11 paintings (1733; in situ) illustrating scenes from Torquato Tasso’s Gerusalemme liberata. These works were strikingly situated between mirrors and subsequently became so famous through engravings that Turin became an obligatory stop on the Grand Tour.

In 1733 Vanloo married Christina Antonia Somis, a celebrated opera singer. A year later the couple left for France, probably to escape the escalating warfare in Piedmont. His return to Paris marked the beginning of a brilliant career. In 1735 he was admitted (reçu) by the Académie Royale with a painting of Apollo Flaying Marsyas (1735; Paris, Ecole Nationale Supérieure Beaux-Arts) that demonstrated his Italianate mastery of anatomy and Classical antiquity. Official commissions immediately followed. He contributed, along with Boucher and Charles Parrocel, two Rubensian paintings of a Bear Hunt (1736) and an Ostrich Hunt (1738; both Amiens, Museu Picardie) to a decorative series of exotic hunts for the Petits Appartements of Louis XV at the château of Versailles. He also produced a succulent, Watteau-like Rest on the Hunt (1737; Paris, Louvre) as a pendant to a work by Parrocel for the Petits Appartements at the château of Fontainebleau. His other royal commissions included a cartoon of Theseus Overcoming the Minotaur (1746; Nice, Musee Beaux–Arts) for the Gobelins, and the Allegory of Painting (1752–3; San Francisco, Palace of the Legion of Honour) for Mme de Pompadour’s château of Bellevue. With the versatility of his period, Vanloo also produced a number of portrait paintings that included sitters from the royal family (e.g. Queen Marie Leczinska, 1747; Versailles, Chateau). His most dramatic portrait was that of Mlle Clairon as Medea (exh. 1759 Salon; Potsdam, Park Sanssouci).

Besides his work for the court, Vanloo produced paintings for Parisian high society. To appeal to its taste, he often employed a sensuous Rococo style that rivalled that of Boucher. His five history paintings for the decoration of the Hôtel de Soubise, Paris (e.g. Castor and Pollux, 1737; Paris, Archives Nationale), demonstrate this ability to tailor styles to patrons’ demands. His most popular paintings, however, were turqueries, a type of genre scene that depicted contemporary figures in Turkish or other exotic dress. The collectors Jean de Jullienne and Louis Fagon commissioned respectively the Pasha Having his Mistress Painted (c. 1737; Richmond, Virginia Museum of Fine Arts) and the Sultan Giving a Concert to his Mistress (c. 1737; London, Wallace Collection). Mme Geoffrin, whose salon Vanloo frequented, also ordered two exotic scenes as pendants: the Spanish Conversation Piece (1754) and the Spanish Lecture (c. 1758; both St Petersburg, Hermitage); in these Vanloo portrayed his wife in Spanish costume.

Vanloo also made a significant contribution to religious painting. His early Parisian works continued the stylistic diversity of his Roman period, as in the refined Virgin and Child (1738; Rouen, Musee Beaux-Arts) and the more dynamic and agitated Martyrdom of St Stephen (1740; Valenciennes, Musee Beaux-Arts). By the 1740s, however, a new emphasis on grandeur and monumentality had begun to appear, as in his Rubensian altarpieces of St Denis and St George for the charterhouse of Champmol. By the 1750s he had developed a style of religious painting that fully incorporated the Italian Grand Manner, while moving beyond it in its uniquely French idiom of clarity, nobility and compositional reserve. This style is best exemplified by the six scenes from the Life of St Augustine that he painted between 1746 and 1755 for the choir of Notre-Dame-des-Victoires, Paris. Still in situ, these enormous paintings transform their stylistic precedents in Raphael, Eustache Le Sueur and Bon Boullogne into an unparalleled, 18th-century orchestration of monumental form, grey-blond colour harmonies and dramatic pictorial light. The cycle’s St Augustine Preaching before Bishop Valerius is one of the artist’s most admired works.

While Vanloo’s stylistic eclecticism and the wide range of his subjects make him difficult to categorize in 18th-century art, it was precisely these qualities that his contemporaries admired. To them, he seemed to possess a total mastery of artistic traditions, and as a consequence he was immensely successful. Baron von Grimm called him the greatest painter in Europe, and Voltaire compared him to Raphael. He never lacked commissions, and his works were generally acclaimed at the Salons. He also enjoyed many prestigious appointments, such as professor at the Académie Royale (1737); Director of the Ecole Royale des Elèves Protégés (1749); Premier Peintre du Roi (1762); and Director of the Académie Royale (1763). He was ennobled in 1751. He was highly regarded by his students, who included Jean-Honoré Fragonard, Gabriel-François Doyen, Bernard Lépicié and Louis Lagrenée. His considerable reputation was short-lived, however; even before his death he began to witness an increasing vogue for Neo-classicism among the precursors of Jacques-Louis David. Two decades later, at the height of the Davidian revolution in painting, Vanloo’s eclecticism was blindly condemned in the purging of the Rococo style, giving rise to the derisive slogan ‘Vanloo, Pompadour, Rococo’. His reputation has only begun to be re-evaluated in the late 20th century.