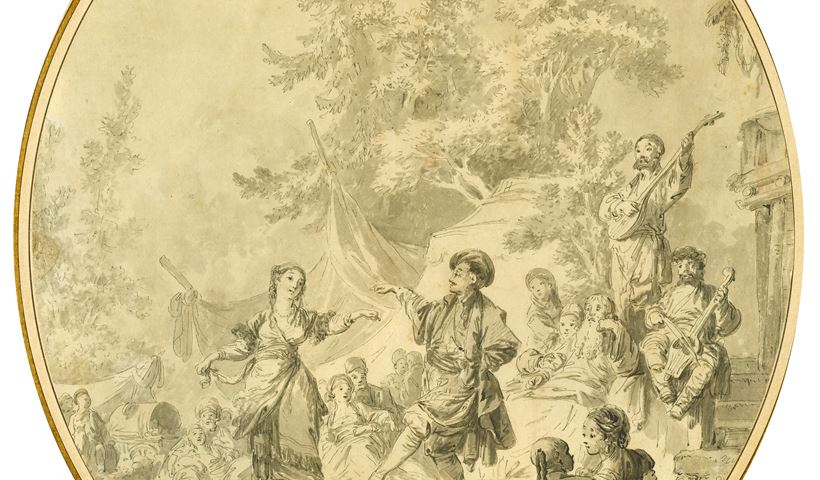 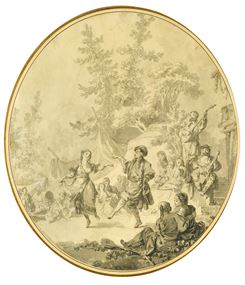 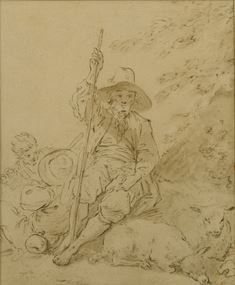 A Shepherd Resting, Two Figures Behind 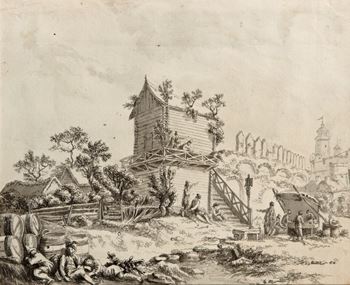 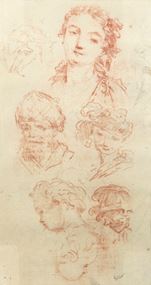 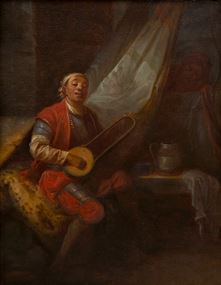 Musician in a Russian Costume Seated by a Bed 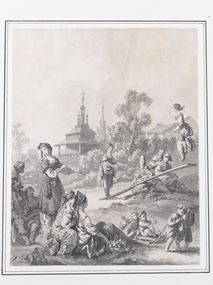 The Russian Dance & The Seesaw

Born to a family of ornamental sculptors and gilders, he became famous for creating a new kind of genre picture, based on the direct observation of Russian subjects, and also for perfecting aquatint technique. Sometime around 1750 he became a pupil of François Boucher, thanks to the protection of the Maréchal de Belle-Isle (1684–1761), governor of Metz. Boucher’s saturated brushwork, highly finished surfaces and incisive drawing had a decisive impact upon the young artist, as did, perhaps, the diversity of his output. He was also inspired by 17th-century Dutch and Flemish genre and landscape painters.

Le Prince is said to have made a trip to Italy in 1754, fleeing from the much older wife whom he had married in 1752, but there is as much evidence against such a trip as for it. By July 1757 Le Prince had arrived in St Petersburg. Well received by the French envoy, the Marquis de l’Hôpital, he received more than 40 commissions to execute overdoors for the Empress Elizabeth in the newly constructed Winter Palace; he received more commissions from Peter III (1728–62). Le Prince is said to have travelled extensively in Russia, according to some as far as Siberia. His prints show a knowledge of the north-western and western Empire, but the number of imperial commissions that cover his entire sojourn from 1757 to 1762 makes it unlikely that he travelled as much as has been claimed. The drawings he made in Russia (e.g. Paris, Louvre) provided the basis for a considerable body of work that added to the general taste of the 18th century for exotica.

The years between 1763 and 1775 mark the summit of Le Prince’s career and production. From 1764 to 1768 he was at work on drawings; Philadelphia, PA, Rosenbach Library, for the Voyage en Sibérie; Paris, 1768, of the Abbé Jean-Baptiste Chappe d’Auteroche (1728–69). In 1765 he was received (reçu) as a member of the Académie Royale de Peinture et de Sculpture with a painting representing a Russian Baptism ; Paris, Louvre, and showed 15 pictures at the Paris Salon, all of Russian subjects. In 1769 Denis Diderot severely criticized one of his Salon exhibits, Le Cabak ; Stockholm, National Museum, for its lack of finish; Diderot, however, also praised Le Prince for his refined mastery of aquatint technique. Between 1765 and 1768 Le Prince published several suites of etchings and aquatints on Russian themes, and he exhibited 29 sheets at the Salon of 1769. The popularity of his Russian subjects is also shown by his tapestry cartoons of Russian Games.

After 1770 ill-health caused Le Prince to retire to the Brie district near Paris. He then concentrated more on landscapes and pastoral subjects, such as Landscape near Tobolsk; Rouen, and the Russian Festival; 1770, Angers. Working from sketches executed from life and using models and actual costumes brought back from his travels, Le Prince introduced an almost ethnographic concern and exacting accuracy into his rendition of exotic subjects. Although these Russian pictures constitute the best-known aspect of his output, he also produced Classical subjects, such as Anacreon; Lawrence, U. KS, Spencer Museum of Art, and gallant genre pictures, such as Fear; Toledo, Ohio Museum of Art, as well as French landscapes.