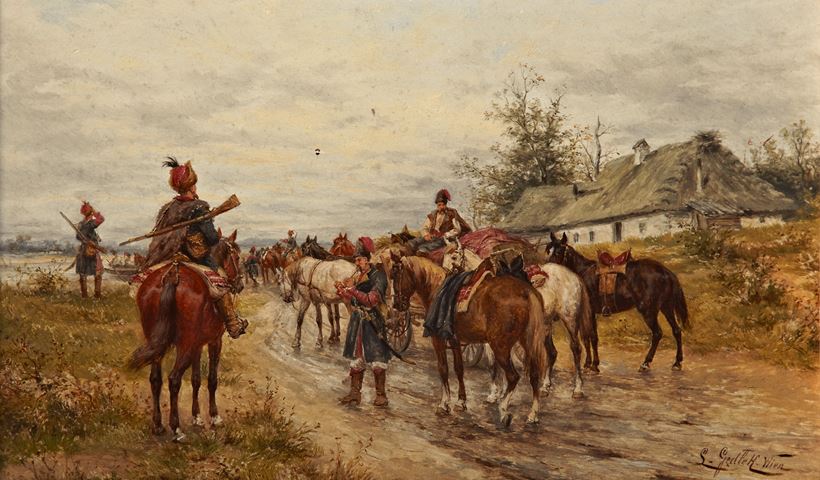 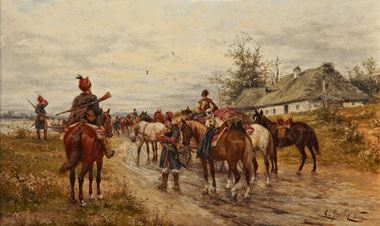 The central theme of Ludwig Gedlek’s work is similar to the work of Joseph Brandt, who painted genre scenes from the life of the Cossacks, in particular the Ukrainian Zaporozhian Cossacks. In the nineteenth century numerous Polish painters took on Cossacks as their subject matter and they became a picturesque part of the iconography of European Romanticism. The history of Ivan Mazepa, the Cossack Hetman of the Hetmanate, for example, inspired Lord Byron’s poem Mazeppa (1818), Tchaikovsky’s opera of the same name (1881-1883) and Alexander Pushkin’s poem Poltava (1828-1829). For Polish artists, however, the Cossacks, in particular Zaporozhian Cossacks, assumed a special, symbolic significance

Gedlek began his artistic studies at the Krakow School of Fine Arts under the direction of W. Łuszczkiewicz. In 1863 Gedlek had his exhibiting debut at the Art Society in Krakow (TPSP), where he later exhibited several times. In 1873 he received a scholarship which enabled him to travel to Vienna, where he continued his studies at the Academy until 1877. There he studied under the Austrian artist Eduard Peithner von Lichtenfels (1833-1913), who was known for his skilled and fluid technique, which he combined with a poetic view and humour, and also under C. Wuerzinger, who was a painter of religious and historical subjects. Gedlek continued teaching in Vienna, and finally settled there on a permanent basis. He took part in numerous exhibitions in Poland with the Art Society in Krakow, Lviv, Warsaw and abroad in Dresden and Vienna. A master of oil painting, Gedlek depicted landscapes, mostly of the outskirts of Krakow, genre scenes, hunting scenes and historical battle scenes, which frequently included his preferred subject matter of horses.