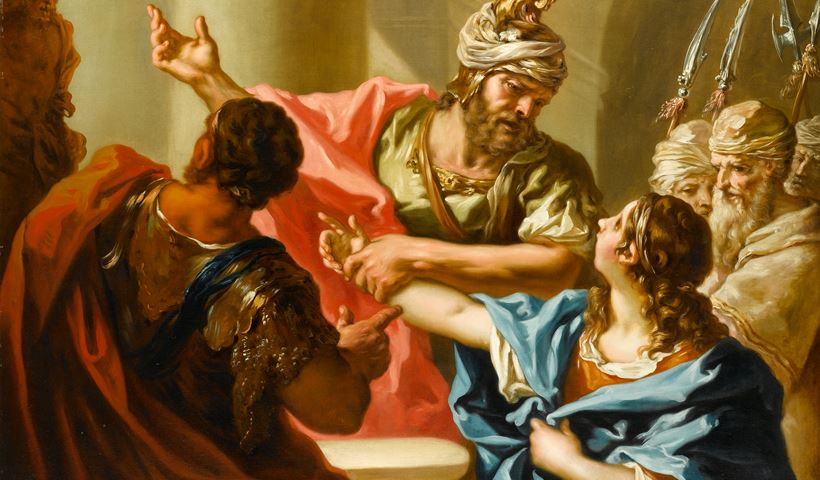 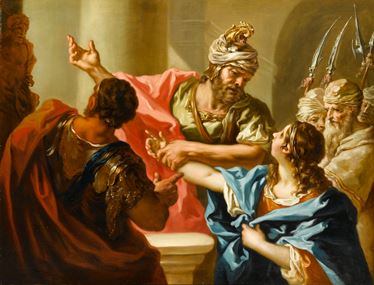 Along with Sebastiano Ricci and Jacopo Amigoni, Pellegrini was the most important Venetian history painter of the early 18th century. By uniting the High Renaissance style of Paolo Veronese with the Baroque of Pietro da Cortona and Luca Giordano, he created graceful decorations that were particularly successful with the aristocracy of central and northern Europe. He travelled widely, working in Austria, England, the Netherlands, Germany and France.

His father, a glover, came from Padua. At an early age Pellegrini was apprenticed to the Milanese Paolo Pagani (1661–1716), with whom he travelled to Moravia and Vienna in 1690. In 1696 Pellegrini was back in Venice, where he painted his first surviving work, a fresco cycle in the Palazzetto Corner on Murano, with scenes from the life of Alexander the Great and allegorical themes on the ceiling. Here his figure style is clearly derived from Pagani, but the effects of light and the free handling suggest the art of Giordano or even Cortona, whose work Pellegrini could not then have known. He was in Rome from 1699 to 1701, before returning to Venice for two decorative projects, both on allegorical themes: one for the Scuola del Cristo and the other for the Palazzo Albrizzi. These works are deeply influenced by the art of Giordano and the late works of Giovanni Battista Gaulli, which he had seen in Rome. In 1704 Pellegrini married Angela, a sister of the pastellist Rosalba Carriera. He remained in close contact with his sister-in-law for the rest of his life.

In 1708, Charles Montagu (later 1st Duke of Manchester), the British ambassador extraordinary at Venice, invited Pellegrini and Marco Ricci to England. Pellegrini stayed until 1713. The visit was of decisive importance for him because he established himself as one of the most sought-after decorative painters in Europe during these years. His first work in England was probably the decoration (destr.) of the stair-well in the Duke of Manchester’s house in Arlington Street, London. In 1709, with Ricci, Pellegrini designed sets for Alessandro Scarlatti’s opera Pirro e Demetrio and for Giovanni Bononcini’s Camilla. His most important large-scale decoration was the cycle in Castle Howard, N. Yorkshire, which was largely destroyed by fire in 1941. The cupola of the hall was filled by a dramatic painting of the Fall of Phaeton, and the walls were decorated with mythological and allegorical scenes. By now the influence of Giordano and Gaulli had weakened and his style, with clear, light tones, was an entirely individual interpretation of the art of Paolo Veronese. In 1713 he finished the decoration of the chapel and the stair-well of the Duke of Manchester’s country house, Kimbolton Castle, for which he provided the Triumph of a Roman Emperor on the walls and Minerva, which includes a portrait of the patron upheld by putti on the ceiling (both in situ). Again, the light and radiant colours are indebted to Veronese; the scene of musicians playing a fanfare, painted in a triangular area, is brilliantly accomplished, both as an independent work and as part of the whole. Pellegrini’s third large-scale cycle from this period, probably done c. 1709–10, consists of a series of mythological canvases originally intended for Burlington House, London, and now in Narford Hall, Norfolk. Pellegrini enjoyed considerable success in England. He was popular with the aristocracy and was appointed one of the directors of Kneller’s Academy in 1711.

On his way to Paris Pellegrini stopped in Düsseldorf, where he was introduced to John William, Elector of the Palatinate. The ambitious and luxury-loving Elector liked Pellegrini’s work and persuaded him to stay for three years by commissioning decorations for the Wittelsbach country seat, Schloss Bensberg. In the autumn of 1713 he completed two ceiling paintings for the stair-wells, representing the Fall of Phaeton and the Fall of the Giants (both in situ). In the following year he started a series of large allegorical canvases celebrating the Elector’s rule and intended for one of the rooms of Schloss Bensberg . This series, now in Schloss Schleissheim, near Munich, is generally considered Pellegrini’s most important work. The large historical allegories show a clear relationship with the Medici cycles by Rubens (1622–5; Paris, Louvre) and Cortona (Florence, Pitti). The similarity with the latter is unsurprising in view of Johann Wilhelm’s marriage to a Medici princess, Anna Maria Luisa, and the consequent contact between the courts of Florence and Düsseldorf. Pellegrini would have become acquainted with Rubens’s work in England and again in the Elector’s collection at Düsseldorf. It is clear from the brilliantly coloured, festive paintings for the Schloss Bensberg, with their suggestion of grand opera, that he had been impressed by that master’s style.

Having moved to the north Netherlands in 1717, he fulfilled at least one important commission in Amsterdam, for a ceiling in a house at the Herengracht (in situ; Aikema and Mijnlieff), and, in 1718, worked in The Hague on the decoration of the lower hall of the Mauritshuis (in situ). While in Holland, Pellegrini met William Cadogan, 1st Earl Cadogan (1675–1726), who invited him to decorate his country house (destr.) at Oakley, Bucks, in 1719; he returned to Venice in the winter of that year and on his way through Paris won the commission to decorate the ceiling of the Mississippi Gallery in the Banque Royale. To fulfil this commission he returned to Paris between April 1720 and March 1721, accompanied by his wife, sister-in-law (who described the visit in her diary; see Sani) and Anton Maria Zanetti the elder. In this project he created an elaborate allegory celebrating the success of the bank and the glory of the King. The bank failed shortly thereafter and the painting (untraced) was removed.

In the early months of 1722 Pellegrini executed some of his most successful works, among them two altarpieces, St Ulric Healing a Sick Man and the Virgin of the Rosary (both in situ) for the Benedictine monastery of St Mang at Füssen, and in Venice the Martyrdom of St Andrew (Venice, S Stae); all of these are distinguished by brilliant colours and dissolving light. He was back in Paris in the summer and autumn of 1722, thereafter once more in Venice and in Würzburg in 1724. In 1725 he worked in Dresden, where the lavish patronage of Augustus II, Elector of Saxony and King of Poland, was becoming renowned. His frescoes for Ubigau castle and the Zwinger pavilion are destroyed, but there are two surviving altarpieces, one of the Trinity (in situ) for the Catholic court chapel at Dresden and the other depicting Christ Handing the Keys to St Peter (Bautzen, Stadtmus.).

In the autumn and winter of 1725 Pellegrini stayed in Vienna, where he made important contacts and to which he returned in 1727 after a short trip to Italy in 1726.

Pellegrini was now 55 years old and had travelled almost continuously for more than 20 years. He settled for his remaining years in Venice, where he executed commissions in and around the city. In 1735 he was paid for the delivery of an altarpiece, St Catherine, for the Santo in Padua (now in the library of the Santo). He undertook one more trip abroad in 1736–7 to work for the Elector Charles Philip (reg 1716–1742), who was related to Elector John William, on a series of four ceiling pieces in his Residenz in Mannheim. Like so much of Pellegrini’s work, these ceilings were destroyed by bombardment in World War II. Pellegrini had an important collection of Dutch art, which, after his death, was acquired by the English consul Vivian Smith. His work was widely influential and played an important role in the formative years of Giambattista Tiepolo and Giovanni Antonio Guardi.