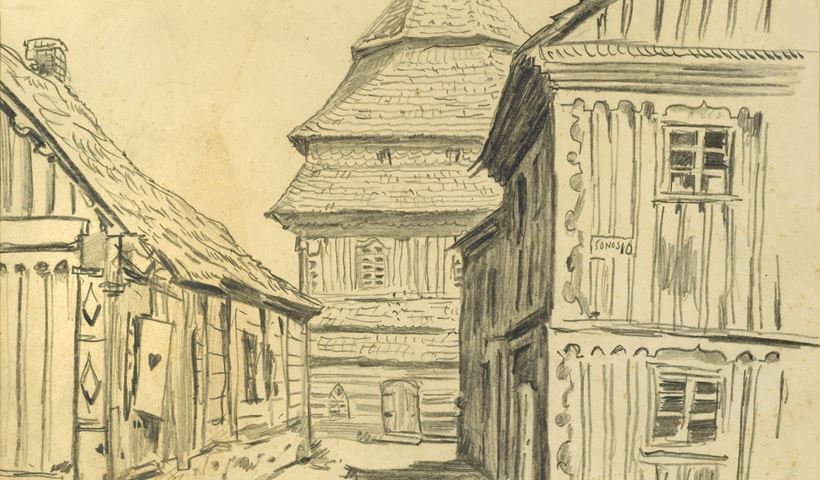 A View of Šaukėnai, Lithuania 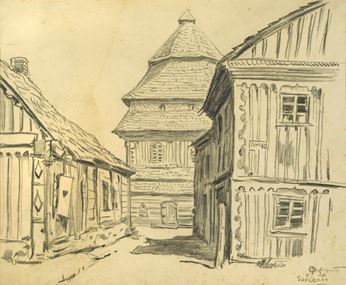 A View of Šaukėnai, Lithuania

Mstislav Valerianovich Dobuzhinsky was a Russian-Lithuanian artist noted for cityscapes conveying the explosive growth and decay of the early twentieth-century city. He was born on August 14, 1875 in Novgorod into the family of an army officer. From 1885 to 1887, he attended the Drawing School of the Society for the Promotion of the Artists. Between 1895 and 1899, he studied law at the University of St. Petersburg, studying simultaneously in private studios. After graduating from the university, from 1899 to 1901, he was trained under Anton Azbè in Munich and under Simon Hollósy in Nagybánya (Austria-Hungary).

After his return to St. Petersburg he joined the artistic society World of Art. He first collaborated with them as illustrator of books and magazines. From 1903, he took part in World of Art shows. The main subject of his works was city, he managed to show his understanding of St. Petersburg as composition of classical architecture with ugliness of urbanization. The cityscapes of different towns and cities became his main topic. From 1910 he travelled annually abroad, visiting Britain, France, Italy, Germany, and Holland. Dobuzhinsky was also a teacher who taught in different schools and studios. In the late 1900s he tried himself as a stage designer, and in the 1910s-1920s produced a great amount of book illustrations.

During the First World War Dobuzhinsky went with Evgeny Lanceray to the front lines to sketch. Later, he took part in the Second Congress of the Communist International. In 1918, he supervised the theatrical workshop at the State Educational Workshops of the Decorative Arts (the former Stieglitz School of the Technical Drawing). In 1923-24, he went abroad to study developments in European art and to arrange one-man shows. In 1924, he immigrated to Lithuania, and in 1939, to the USA, working primarily as a stage designer. He died in New York on November 20, 1957.

Collections
Dobuzhinsky is represented in the following instituions: The Tretyakov Gallery, Moscow; The Theater Museum of A. A. Bakhrushin, Moscow; The Russian Museum, St. Petersburg; The Picture Gallery of Armenia, Erevan, amongst others.