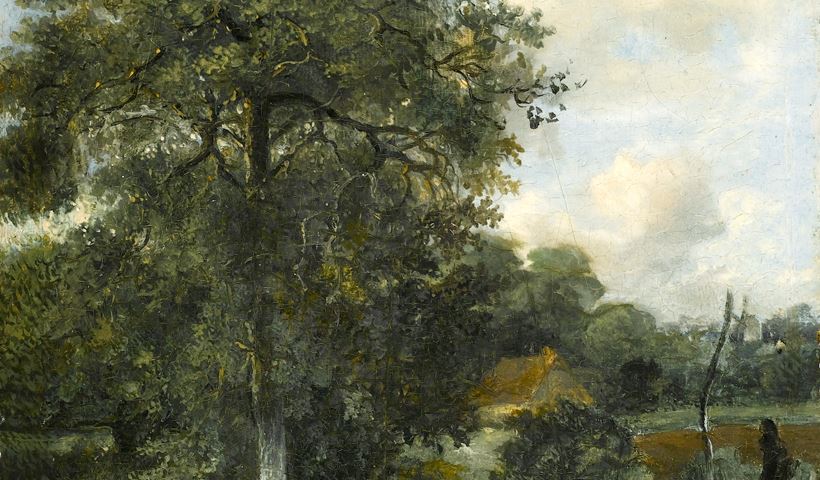 A Wooded Landscape with an Oak 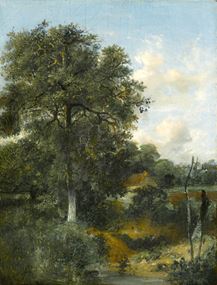 A Wooded Landscape with an Oak

John Crome was an English painter, printmaker, collector and teacher, who was born in the English city of Norwich where he worked and died. John Crome is also known as Old Crome to distinguish him from his son, John Berney Crome, who was also a well-known artist. The son of a journeyman weaver, he was apprenticed to a coach and sign painter, Francis Whisler, from 1783 to 1790. He presumably continued in this trade and during the 1790s consolidated his artistic training. Early local influences upon Crome included William Beechey and John Opie, but the friendship of Thomas Harvey, a patron, collector and amateur artist, was the most significant. Harvey’s collection included works by Dutch 17th-century masters such as Aelbert Cuyp, Jacob van Ruisdael and Meindert Hobbema, and also works by Gainsborough and Richard Wilson. The earliest record of Wilson’s influence is provided by two oils entitled Composition in the Style of Wilson (untraced), dated 1796 and 1798 in Crome’s Memorial Exhibition of 1821. The Dutch influence was also strong throughout Crome’s career. Crome’s early acquaintance with Harvey and his collection almost certainly encouraged him to become a collector, and the Yarmouth banker Dawson Turner recorded buying pictures from Crome, including Old Masters as well as the artist’s own work. Like many of his contemporaries, Crome established a practice as a drawing-master. According to Dawson Turner, he became a teacher on marrying Phoebe Berney in 1792. Members of the Gurney family of Earlham Hall, Norwich, were among his earliest pupils, and in 1802 he accompanied them on a visit to the Lake District. In 1804 he visited Wales with Robert Ladbrooke, his brother-in-law and co-founder of the Norwich Society of Artists. His one trip abroad took place in 1814, when he visited the art collections brought to Paris by Napoleon.

The local press credited Crome early for his role as a founder of the Norwich Society of Artists in 1803 and the Norwich school of painters. Crome’s monochromatic paintings, such as his magnificent View of Carrow Abbey, near Norwich (1805; Norwich, Castle Museum), did not find universal acceptance. Although he later lightened his palette his work was criticized for its ‘unfinished’ appearance even towards the end of his career. Within weeks of his death, however, people were reported to be ‘crazy for his pictures’ (Rev. W. Gunn to J. Flaxman, 4 May 1821; Cambridge, Trinity College Library). Crome’s work was entirely original, exhibiting a fresh vision, clear colour and strong design, derived as much from the direct observation of nature as from the study of Old Masters. His subject-matter was invariably the local landscape, including buildings and intimate scenes on the rivers Yare and Wensum, such as Back of the New Mills, Norwich (c. 1814–17) and New Mills: Men Wading (c. 1812; see; both Norwich, Castle Museum). 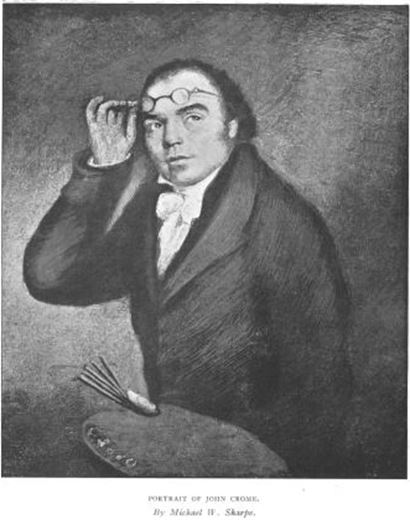