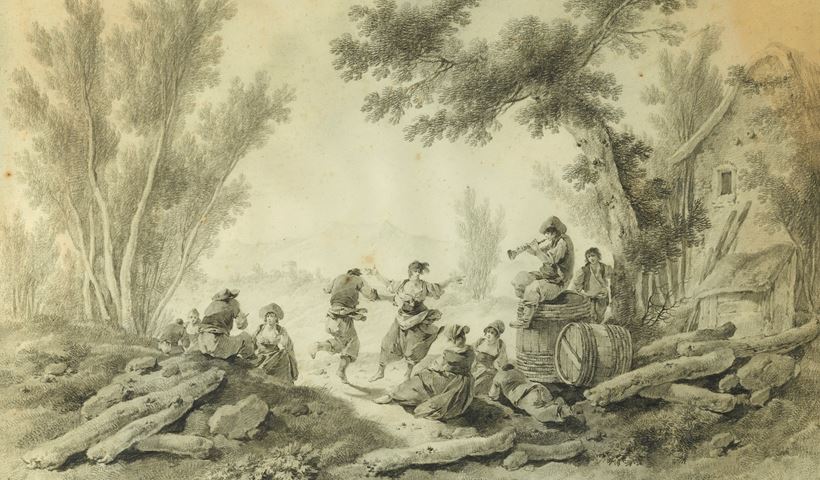 Peasants Resting and Dancing to a Piper beside a Farm 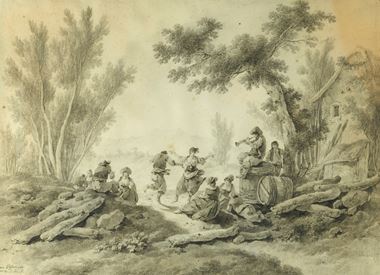 Peasants Resting and Dancing to a Piper beside a Farm

Jean-Baptiste Pillement was a painter and designer, known for his exquisite and delicate landscapes, but whose importance lies primarily in the engravings done after his drawings and their influence in spreading the Rococo style, and particularly the taste for chinoiserie, throughout Europe.

Pillement, born in Lyon, had an unusually cosmopolitan career. He moved from Paris, working for the Gobelin factory. After a brief spell at the Gobelins, in 1745 he left for Madrid. He stayed there for three years, and his work was much appreciated both in Spain and in Portugal, which he visited often. He supervised sets of Rococo singeries and chinoiseries painted for Quinta de Alegria, the house at Seteais, near Sintra, of the Dutch consul in Lisbon, Jan Gildemeester, and soon after he was offered the title of Painter to the King. He declined this honour and instead travelled to London.

Pillement spend eight years in England, fully exploiting the English taste for landscapes. There the paintings by Nicolaes Berchem inspired him. During his years in England, Pillement had enjoyed excellent relations with his English patrons, engravers and publishers. His drawings were frequently engraved in London for Rococo pattern books, and in 1767 an influential collection of prints of his decorative, genre and landscape subjects was published as One Hundred and Thirty Figures and Ornaments and Some Flowers in the Chinese Style. This and other pattern books were widely used by textile designers. Pillement came acquainted with David Garrick, a famous actor, and his Austrian wife Eva Maria Weigel, collectors of his work in England. Pillement went to Vienna and in 1765 he went to Warsaw, decorating the Royal Castle in Warsaw and the Ujazdowski Castle, his largest project, commissioned by Stanisław August Poniatowski. He also worked in Saint Petersburg, the Piedmont, Milan, Rome, and Venice. Pillement travelled to Paris to work for Marie Antoinette in the Petit Trianon.

During the French Revolution in 1789 Pillement moved to Pézenas in the Languedoc. At the end of his life he went back to Lyon, where he designed for the silk industry and gave lessons in the Academy founded by Napoleon.

Pillement's illustrations are a mixture of fantastic birds, flora & fauna, large human figures and chinoiserie. His designs were used by engravers and decorators on porcelain and pottery, but also on textiles, wallpaper and silver. Pillement had discovered in 1764 a new method of printing on silk with fast colours (recorded in his Memoirs).