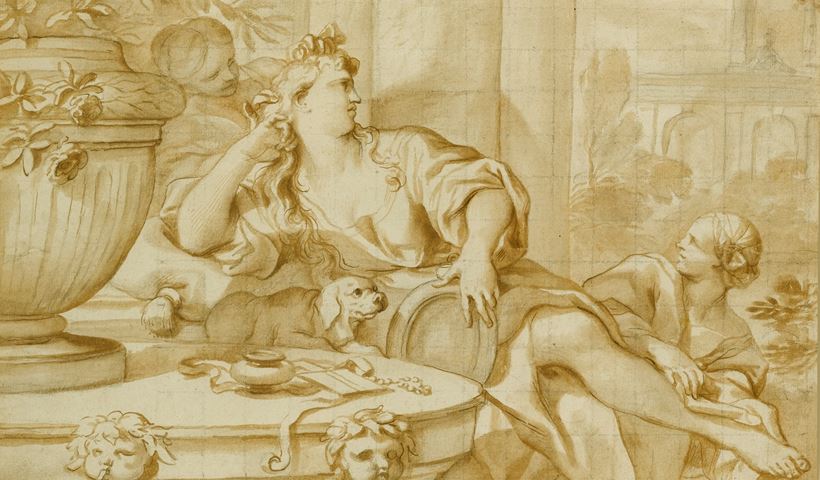 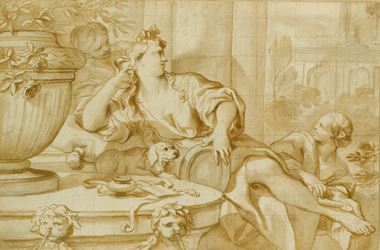 Piola was an Italian painter, draughtsman, printmaker and designer. He was the leading artist in Genoa in the second half of the 17th century, providing ceiling frescoes for many Genoese churches and palaces and producing paintings for private collectors. He was also a prolific draughtsman, whose many designs for thesis pages and book illustrations promoted his work throughout Europe. The enormous and multifarious productivity of his studio, his numerous collaborations with other artists and the fact that most of his most ambitious projects have been destroyed have discouraged any systematic study of his work.

After his initial training with Pellegro at the age of seven, Domenico studied under Pellegro’s teacher, Giovanni Domenico Cappellino (1580–1651), for four years. These periods of training may have contributed to the monumentality of his compositions and draughtsmanship, but his early copies after Giovanni Benedetto Castiglione and his working relationship with Valerio Castello in the late 1640s and early 1650s encouraged the development of a more Baroque style. His early work is highly eclectic; his Martyrdom and Ascension of St James (1647; Genoa, S Giacomo della Marina) follows Castello in its debt to the elongated figures of Lombard painters such as Cerano and Giulio Cesare Procaccini.

The elements of Castiglione’s work that Piola absorbed led to the undulating figures, streamlined twisting draperies and diagonal composition of his drawing The Communion of Clare of Montefalco (London, British Museum), and his paintings in the Oratory of St John the Baptist at Spotorno: the Assumption (1664) and the Nativity (1669); a large lunette, Rest on the Flight into Egypt (c. 1661; Genoa, S Siro), and an altarpiece, St Thomas Aquinas before the Cross (c. 1666; Genoa, SS Annunziata). These works, with the fresco of St Francis Xavier Meeting the King of Bungo (1666–7) in SS Gerolamo e Francesco Saverio, Genoa, show that Piola’s style was fully mature by 1670. Piola responded to the echoes of Parmigianino’s style that he found in the work of Castello. The influence of Parmese art was strengthened after the return of Gregorio de’ Ferrari from Parma (c. 1672). Ferrari brought with him the charming qualities of Correggio’s style and encouraged Piola’s own predilection for diagonal movement, bright colours and strongly foreshortened figures. In 1674 Ferrari married Piola’s daughter, Margherita, consolidating the existing business collaboration between the families. The work undertaken by the Casa Piola did not change but, with Ferrari’s help, was considerably augmented. In the 1670s and 1680s the two artists collaborated on many fresco projects.

A new decorative richness is apparent in Domenico’s secular and sacred vault fresco, the Glory of S Gaetano (1674; Genoa, S Siro), and in his fresco Bacchus and Ariadne (1679; Genoa, Palazzo Centurione). This is also visible in his altarpiece of the Assumption (1676; Chiavari Cathedral) and his painting of the Annunciation for SS Annunziata in Genoa (1679). In 1684 Piola began to fresco the choir of S Leonardo and two rooms in the Villa Gropallo at Zerbino; all work was interrupted in this year after a French bombardment destroyed much of Genoa, including Domenico’s house and studio.

In 1684–5 Domenico made a trip with his family to Milan, Piacenza, Bologna and Asti. At Piacenza, perhaps assisted by his student Giovanni Battista Draghi (1657–1712) and by Giovanni Battista Merano, he painted decorations in the Casa Baldini and in S Maria in Torricella (frescoes destroyed). At Asti, with his sons Antonio Maria and Paolo Gerolamo, he frescoed scenes from the Life of the Virgin (destroyed) in the presbytery of the cathedral. In Genoa in 1688 he and Gregorio de’ Ferrari began to decorate rooms in the Palazzo Rosso on the theme of the four seasons, Piola executing Autumn and Winter and Ferrari the more lyrical Spring and Summer. Preparatory drawings for Winter survive (Genoa, Palazzo Rosso; London, British Museum).