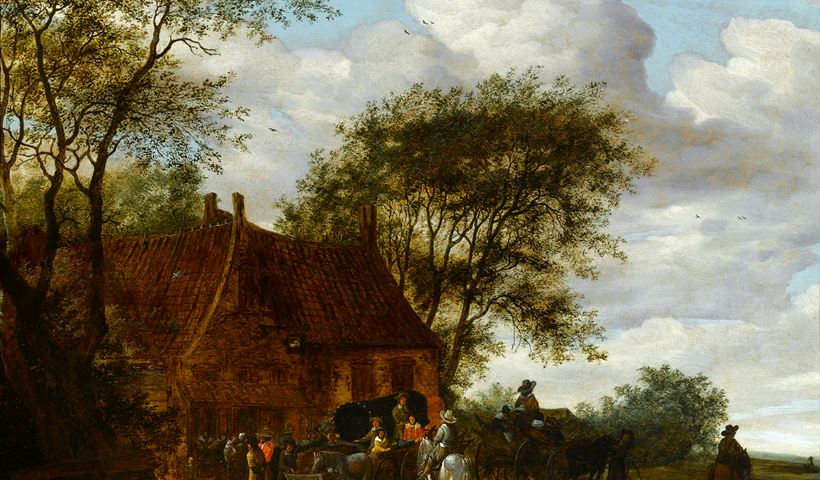 A Wooded Landscape with Travellers by an Inn 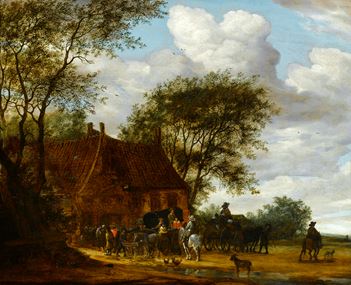 A Wooded Landscape with Travellers by an Inn

Salomon van Ruysdael was born in Naarden where his father, Jacob Jansz. de Goyer (c. 1560–1616), was a moderately wealthy cabinetmaker. Although Salomon initially used the name ‘de Go(o)yer’ [of Gooiland], he soon followed the example of his eldest brother and adopted ‘Ruysdael’ from the castle of Ruijschdaal in Gooiland, which may once have been a family possession. Shortly after his father’s death, Salomon and another brother, Isaack van Ruysdael (1599–1677), a painter, framemaker and dealer, moved to Haarlem, where Salomon entered the Guild of St Luke in 1623 (as ‘Salomon de Gooyer’).

Among Salomon’s earliest paintings are three winter scenes dated 1627 (e.g. Frozen Landscape with Skaters, Vienna, Ksthist. Mus.). The composition of each, with its low horizon and narrow strip of land in the foreground punctuated by small playful figures, recalls the work of Hendrick Avercamp and, particularly, Esaias van de Velde. Other paintings from these years represent the sandy and hilly terrain bordering Haarlem. Many are clearly dependent on Pieter Molyn, a key figure in the rise of realistic Dutch landscape painting who also lived in the town. Van Ruysdael’s Landscape with a Peasant Farmhouse (1631; Berlin, Gemäldegal.) conforms to a pattern for depicting dunes that Molyn had evolved: a rugged country road stretches obliquely from the right foreground to the left middle distance, while a second diagonal formed by the trees moves in a contrapuntal direction from the upper right of the painting. The illusion of space is further heightened by a darkened area in the left foreground, which contrasts with the intensely lit road. Van Ruysdael’s palette of greens and browns also suggests the influence of Molyn. Van Ruysdael quickly gained a reputation among his contemporaries in Haarlem for his direct unembellished interpretations of the surrounding countryside, and in 1628 Samuel van Ampzing included van Ruysdael in his town history (Beschryvinge ende lof der stad Haerlem in Holland [‘Description and praise of the town of Haarlem in Holland’]), in a section dealing with famous Haarlem painters; he referred to him and Gerrit Claesz. Bleker ( fl 1625–56) as ‘good at landscapes with small figures in them’.

During the early 1630s van Ruysdael began to paint river scenes, probably in emulation of Esaias van de Velde, but also in close parallel with van Goyen, who simultaneously began to develop the same theme in a similar way. The painters must have been in close personal contact, and in 1634 van Goyen was fined three guilders by the Haarlem guild for painting without permission in the house of Salomon’s brother Isaack. Painting during this decade in Haarlem is known as the ‘tonal phase’ since it is generally characterized by an extreme restraint, with colour restricted to striations of greys, greens, yellows, browns and blues. An early example of van Ruysdael’s work in this rather severe style is his River Bank with Old Trees (1633; The Hague, Mauritshuis), in which he confined himself to a near monochromatic palette of blue-grey tones. Also typical is the composition: instead of arranging the elements parallel to the picture plane, a space-creating diagonal consisting of the bank and distant sailing vessels and trees was employed. The draining of colour has a unifying effect, as does the mirroring of the trees and boats on the ruffled surface of the water. However, this economy of pictorial means could not last indefinitely, and by the late 1630s he had begun to use purer and more varied hues.

These changes in van Ruysdael’s art became more absolute after 1640, and he moved further away from the example of van Goyen. He reduced the number of trees in his compositions to one central cluster; his colours became more varied and bright; a new emphasis was given to the clouds, and in place of the familiar wedge-shaped river views, broader expanses of water began to appear. He also began to depict other types of landscapes, for example halts before inns. This transformation in his art can be seen as part of a wider movement in landscape painting from tonality towards a ‘classicizing’ of the subject. The impulse to paint the more mundane features of the Dutch environment in a relatively uncomplicated manner was supplanted by a desire to imbue the landscape with a new sense of grandeur and refinement, perhaps under the influence of such early Dutch Italianates as Cornelis van Poelenburgh and Bartholomeus Breenbergh.

This tendency towards a greater stateliness can be observed in River Bank near Liesvelt (1642; Munich, Alte Pin.). While the painting still features a diagonally projecting mass of land to the right, its severity is offset by a group of tall slender trees and strong horizontals and verticals created through the boats and fishing nets on the left. The same is true of the use of colour. An overall yellow-brown tonality is enlivened with more intense values and splashes of local colour. A painting from the end of this decade, River Landscape with Ferry (1649; London, N.G.), shows van Ruysdael’s progression from his earlier style at a more advanced stage. Here he adopted the river views with ferries by Jan Breughel the elder and Esaias van de Velde but brought greater dramatic interest to the subject with his highly animated figural groups that crowd the small vessels. Van Ruysdael was also concerned with the introduction of compositional variation and achieved it by the zigzag rhythms of the river banks that gently recede towards the church and village, and, to the left, in the diagonal of the three sketchily indicated sailing boats. The work also features a greater definition of form and an even stronger colouristic sense, especially evident in the warm glowing reds of the mounted figures in the ferry.

After 1640 van Ruysdael also began to paint what are often categorized as ‘marines’; however, in van Ruysdael’s case, this term is inappropriate as he preferred calm inland stretches of water to stormy seas. Works from the 1640s that feature large expanses of river and lake (e.g. Laying the Net, Frankfurt am Main, Städel. Kstinst. & Städt. Gal.) are indebted to van Goyen, but van Ruysdael introduced subtle variations of colour into the predominant grey tonality. Paint is applied quite thickly and with great haste in some passages, especially in the sky. A successful recurrent motif is the graceful line of sailing boats, which almost imperceptibly diminish in size towards the horizon. Ruysdael also painted related scenes of water and shipping in an upright format, thus giving them greater structure and presence. Sailing Boats on an Inland Sea (c. 1650; Rotterdam, Mus. Boymans–van Beuningen) is a particularly striking example; a broad sweep of water extends perpendicularly from the picture plane, creating the illusion that the viewer is actually on the water, observing the scene from a nearby craft.

In 1647 and again in 1669 van Ruysdael was named an officer of the Guild of St Luke and in 1648 a deacon. Like many of his contemporaries, he did not earn his living exclusively from painting, and in 1651 he was recorded as a merchant dealing in blue dye for Haarlem’s famous bleacheries. Around 1650 van Ruysdael returned to the subject of the winter landscape. His View of Dordrecht (1653; Zurich, Ksthaus) recalls the winter scenes painted in the 1640s by van Goyen and Isaack van Ostade. Across the wide frozen Maas, peopled by tiny skating figures, horsedrawn sledges and a tent in the left foreground, the prominent tower of the Groote Kerk looms large. Through his concentration on the sky with its large cumulus clouds reflected on to the ice below, he powerfully evoked the crisp atmospheric conditions of a fine winter’s day.

Ruysdael also painted a limited number of still-lifes. Seven such signed and dated works were executed between 1659 and 1662; these invariably show hunting equipment together with game (e.g. Hunter’s Bag with Dead Birds, 1662; The Hague, Mus. Bredius), and the elements are usually arranged on a stone plinth against a muted grey background and are clearly inspired by similar compositions executed by Willem van Aelst and the Hague painter Cornelis Lelienbergh (c. 1626–after 1676). Another popular motif of van Ruysdael’s was that of horsemen and carriages congregating before an inn. (It appears with slight variations in over 30 works from the mid-1630s to the last decade of his life.) One of the largest and finest examples is The Halt (1661; Dublin, N.G.), in which three clusters of trees and a towering tavern are silhouetted against a bright windswept sky which fills almost two-thirds of the canvas. Although the composition is still controlled by a gently sloping diagonal that moves from the tree-tops in the right foreground to the low horizon on the left, the use of brilliant colour and the stressing of such details as the trees are characteristic of van Ruysdael’s later phase. Some of van Ruysdael’s last works, for example Landscape with the Journey to Emmaus (1668; Rotterdam, Mus. Boymans–van Beuningen), clearly reveal the impact of his nephew Jacob van Ruisdael: a gnarled leafless tree and rocky area in the foreground, divided by a running brook from a lush green panorama with a castle beyond, are all elements that appear in the work of van Ruisdael.

Throughout his career, Ruysdael restricted himself to a narrow range of subject-matter and, particularly after 1640, an easily identifiable style. In part, this was determined by the art market; once an artist had found a successful and popular style, he could repeat compositions and motifs endlessly. Nevertheless, despite the dangers of predictability, van Ruysdael’s art never has a tired appearance and always retains a sense of vitality and freshness.

Infrared reflectography carried out on a number of works by Salomon van Ruysdael has revealed extensive charcoal underdrawings in works from the 1630s. The sketch beneath River Landscape with Footbridge (1631; London, N.G.) establishes how van Ruysdael first rapidly mapped out the main components of the scene. It was only when he began to apply paint to the panel that smaller elements such as figures were added and other details undertaken. As no independent drawings by van Ruysdael are known, it is probable, at least in his early period, that he drew directly on to the support in his studio without first making preliminary studies.

Infrared photographs of later paintings (e.g. River Landscape with Fishermen, 1645; Madrid, Mus. Thyssen-Bornemisza) show no evidence of underdrawing and indicate that he composed his landscape views directly on the canvas or panel, making changes and additions as he worked. Presumably as he became more accomplished and reworked familiar themes, there was no longer a need to outline his compositions. Despite spending his entire career at Haarlem, van Ruysdael probably made extensive trips throughout the Netherlands since there are views by him of Leiden, Utrecht, Amersfoort, Arnhem, Alkmaar and Rhenen. Works such as View of Rhenen (1648; London, N.G.), which has no underdrawing, suggest that it and similar paintings were the products of memory, something borne out by topographical inaccuracies. Alternatively, he may have used topographical prints, at least as an aide-mémoire when he composed the scene in his studio.

In general, van Ruysdael painted thinly on a light-coloured ground and during his tonal period often allowed the grain of the panel to become visible in places. This practice not only binds the entire composition together but also gives the paint layers an added depth.