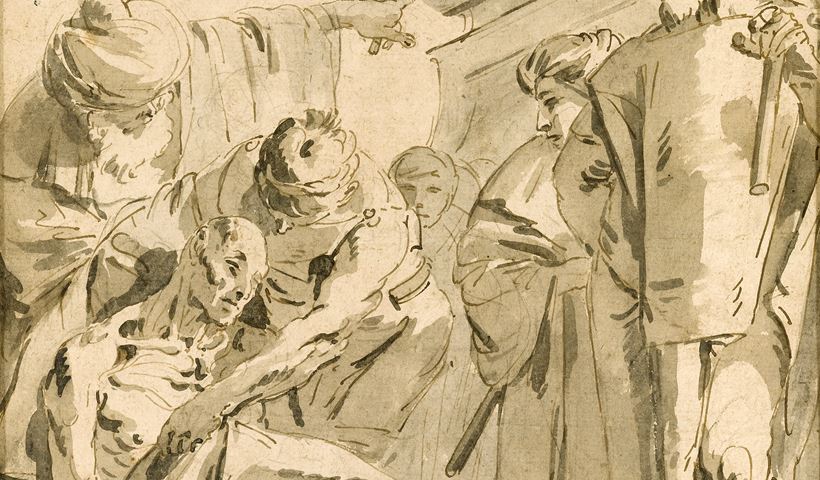 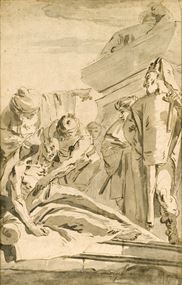 Giambattista (Giovanni Battista) was the most brilliant and sought after Italian painter of the 18th century, and represents the ultimate achievement of the Venetian tradition of decorative painting in the Grand Manner. He also painted numerous large-scale oil paintings, a wide repertory of oil sketches, and was an accomplished draughtsman and a successful and original etcher (Capricci and Scherzi di fantasia). He had been trained in Venice in the workshop of Gregorio Lazzarini and brought up to admire the achievements of the great Venetian Renaissance masters, above all Tintoretto and Veronese. Thus he was not inhibited by the more restrained classical tradition of ancient Rome and the legacy of the Renaissance, Baroque, and Neoclassical artists active there, from Raphael and Michelangelo to Pietro da Cortona and Mengs. Yet through his interest in prints he was well aware of the inventive imagery of a wide range of 17th-century Baroque artists active outside Venice, including the Genoese Castiglione, Salvator Rosa, Stefano della Bella, and Rembrandt, all of whom exercised a strong influence on the range of his visual vocabulary. Through rhetorical gesture and facial expression, a theatrical sense of composition and design, and an imaginative appreciation of the physical context in which his work would be seen, Tiepolo became extremely successful at projecting narrative and telling a story with dramatic effect, whether of religious or secular subject matter. Above all he could enrich and embellish historical and mythological themes by transforming them into poetic fiction, in a manner comparable to an opera by Gluck or Handel. Invariably, in his response both to the natural world and the artistic tradition he inherited, he displayed a sense of fantasy and humour and an exhilarating feeling of joy that had been conspicuous by its absence from so much art of the preceding Baroque era.

His early oil paintings influenced by Piazzetta, Federico Bencovich (1677–1753), and Sebastiano Ricci are notable for their expressive vigour, contorted figures, angular movement, dark and often murky tonality, dramatic lighting, and crowded compositions—for example the Sacrifice of Isaac (Venice, Ospedaletto) and the Madonna of Mount Carmel (1721–2; Milan, Brera). A decisive turning point, and the beginning of Tiepolo's career as a decorator, came with the commission from the Patriarch Dionisio-Dolfin (1663–1734) to decorate the stairwell and piano nobile of his palace at Udine. Working for the first time with Girolamo Mengozzi-Colonna, the quadratura specialist, he painted an illusionistic ceiling of The Fall of the Rebel Angels and filled the walls with scenes from the lives of the ancient patriarchs enclosed by trompe l'œil frames and surrounded by feigned statues in grisaille. Then in the Sala del Tribunale he painted The Judgement of Solomon. The frescoes, dating from c.1726, are notable for their brilliant colouring and the juxtaposition of elegant figures in 16th-century dress within a sunny pastoral landscape.

Tiepolo's first important church decoration was at S. Maria del Rosario (Gesuati, Venice), where in 1739 he painted scenes from the life of S. Dominic. At about the same time he painted for S. Alvise, Venice, a large triptych with scenes from the Passion of Christ, The Way to Calvary, Christ Crowned with Thorns, and The Flagellation. This intense and dramatic altarpiece recalls the work of Tintoretto at the Scuola Grande di S. Rocco, Venice.

During the 1740s Tiepolo continued to paint religious works for churches. However, his two most spectacular achievements at this time were the brilliantly coloured frescoes at the Villa Cordellina at Montecchio Maggiore (The Family of Darius before Alexander and The Magnaminity of Scipio, 1743) and the frescoes of the Meeting of Anthony and Cleopatra and the Banquet of Cleopatra at the Palazzo Labia, Venice, dating from c.1744. Here, working again with Mengozzi-Colonna, Tiepolo fills the entire space of the principal salone, so that the sense of illusion is complete and Anthony and Cleopatra appear to be stepping into the room to encounter the viewer.

The success of these projects prompted the invitation Tiepolo received to go to Würzburg, in Germany, in December 1750, to fresco the ceiling and walls of the Kaisersaal of the Residenz for the Prince-Bishop Karl Philipp von Greiffenklau. Tiepolo also painted two altarpieces for the chapel. He was then retained to decorate the stairwell of the palace, work he completed in 1753: it depicts the Apotheosis of von Greiffenklau, with personifications of the four Continents along the borders below. In their virtuosity and daring, and the successful exploitation of the physical setting and multiple viewpoints provided by Balthasar Neumann's architecture, the Würzburg frescoes are arguably Tiepolo's greatest achievement.

On his return to Venice he continued to receive major commissions and in 1756 became president of the Venetian Academy. At the Villa Valmarana, near Vicenza, Tiepolo in 1757 frescoed four rooms with scenes from Homer, Virgil, Ariosto, and Tasso. In 1760 he was commissioned to paint the ballroom in the Villa Pisani at Stra on the Brenta. Then in 1762 he left Italy once again, never to return, to paint three ceilings at the Palacio Real, Madrid, for King Charles III of Spain. This was followed in 1767 by the royal commission to paint seven altarpieces for the Franciscan church of S. Pascual at Aranjuez. These meditative introspective works were completed in 1769 and were then brought to Aranjuez after the artist's death in March 1770.