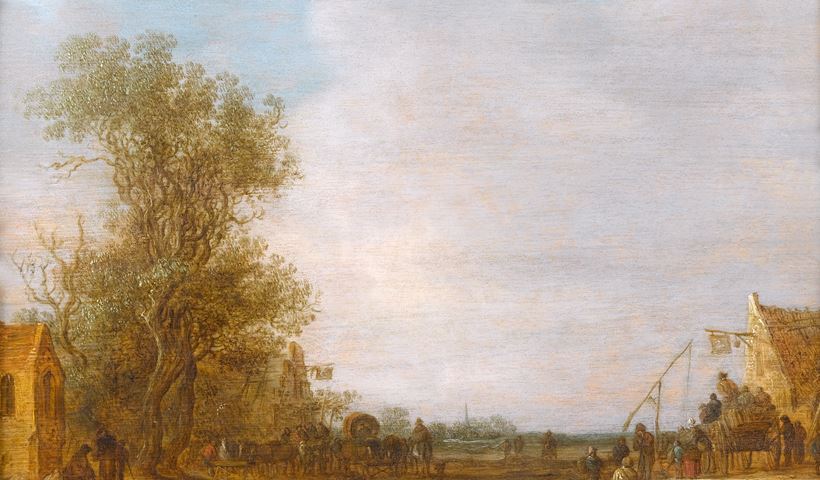 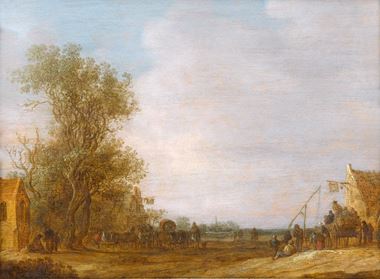 His father, Joseph (Jansz.) van Goyen (d 1625), was a cobbler. The Leiden chronicler J. J. Orlers reported that Jan was only ten when he was apprenticed first to the painter Coenraet A. van Schilperoort ( c. 1577–1635/6), then to Isaac van Swanenburgh, Jan (Arentsz.) de Man (fl 1587) and Hendrick Clock in Leiden before spending two years with Willem Gerritsz. (fl 1587) in Hoorn. After a year spent travelling through France (1615–16), he trained for a year (1617–18) in Haarlem with Esaias van de Velde, who was six years older. On his return to Leiden, he married Anna Willemsdr. van Raelst (5 Aug 1618) and lived in the Zonneveldsteeg. In 1632 he moved to the capital, The Hague, where he settled and in 1634 acquired rights of citizenship. In 1638 and 1640 he was head of the Guild of St Luke there. From 1639 he lived in his own house on the Singelgracht (now Dunne Bierkade 16) next door to the painter Johannes Schoeff (1608–66). From 1649 to 1652 he let the adjoining house to Paulus Potter. Of van Goyen’s three daughters, Maria married the still-life painter Jacques de Claeuw (fl 1642–76) in 1649 and in the same year Margaretha married the genre painter Jan Steen. Around 1652–3 Gerard ter Borch painted a portrait of van Goyen (Vaduz, Liechtenstein).

An important feature of van Goyen’s life was his ambitious striving for prosperity and recognition. Artistic work was generally poorly paid and he was therefore also intermittently active as an art dealer and collector, auctioneer, estate agent and picture valuer. In 1637 he lost a lot of money speculating in tulips. Despite producing more than 1200 paintings and 800 drawings, he was unable to cover his debts. In 1652 and 1654 he had to sell his possessions at public auction. He then moved to the Wagenstraat, but so many debts remained after his death that his widow (d 1672) had to auction all his remaining assets, including the house.

Van Goyen’s early landscapes, produced between 1620 and 1626, clearly show the influence of Esaias van de Velde. Following Flemish examples, he painted some in circular format as pendants (e.g. Summer and Winter, both 1625; Amsterdam, Rijksmuseum). For other landscapes he adopted an elongated rectangular format (e.g. Village Street with Soldiers in De Bilt, 1623; Brunswick, Herzog Anton Ulrich-Museum), which offered a broader setting for the narrative content. These village or beach scenes (e.g. Round Tower on the Beach, 1625; Poznan, National Museum) are full of bustling activity, with numerous figures set under a cloudy, blue-white sky. In keeping with the warlike times, soldiers are often included, but unlike van de Velde and Pieter de Neyn, van Goyen did not depict raids or cavalry skirmishes. He enlivened summer and winter scenes alike with bright local colour. The viewer’s eye is drawn into the depth of the painting by gradations of perspective—for example by means of a tall tree dividing the composition down the middle or serving as a screen to one side with farms in the middle distance (e.g. River, 1625; Bremen, Kunsthalle). The backgrounds typically consist of buildings, brush and dunes.

Around 1626 van Goyen’s art changed, going well beyond van de Velde’s example. The change is closely linked to contemporary Haarlem artists’ creation of a specifically Dutch style of landscape painting that emphasized tonality and realism. Pieter Molijn, Salomon van Ruysdael and Pieter Dircksz. van Santvoort (1603/4–35) were the other principal exponents of this new development, which used native subject-matter and more natural colours. This phenomenon is known by modern art historians as the ‘tonal phase’. Jan Porcellis (known to van Goyen in Leiden), also experimented with tonality in his marine pictures. From 1629 and through the 1630s van Goyen produced simple landscapes showing dunes and rivers in brown and green tones, which achieve an impression of depth with the help of diagonals. He sometimes softened the effects of this compositional device by moving the tallest tree from the edge towards the centre, as in Angler on a Small Wooden Bridge (1634; Pretoria, Arts Museum). The scarcity and small size of the figures in these ‘tonal’ pictures add to the desolation and bleakness of the dune scenery. In slightly later paintings (e.g. Recreation on the Ice by the Ruin of the Huis te Merwede), 1638; Leiden, Stedel. Museum Lakenhal), travellers and carriages or fishermen on land and in boats restored an element of animation, and van Goyen began to open up the background by means of a misty horizon.

In 1637 there was a pause in van Goyen’s creative activity, perhaps due to his speculation in tulips. Then, at the end of the 1630s, he began a period of classical harmony that unified picture and paint, producing works in which an idealized overall impression outweighs local colour. Until about 1638 a subtly differentiated silvery-grey tone predominated (e.g. Two Fishermen, 1638; London, National Gallery) but in the 1640s this gave way to austerely monochromatic paintings in yellowy golden-brown, with a tonal range that, though unrealistic, used colour attractively. He gradually abandoned this style from 1643 and in 1650–51, especially in his paintings on paper (e.g. Ferry with Two Cows and Five Passengers, 1651; Dresden, Kupferstichkab.), employed a distinctly brown monochrome, finally returning, towards the end of his life, to a more natural colour range.

In the 1640s van Goyen tended to adopt a horizontal format, especially in his distant views (e.g. Extensive Panorama, (1646; New York, Metropolitan Museum of Art), though he still produced landscapes with a disguised diagonal structure (e.g. Old Tall Tower, 1646; New York, Metropolitan Museum of Art). Buildings assume an important role, from churches, castles, ruins, gates and towers to monumental town views, such as the View of Dordrecht (1644; Washington, DC, National Gallery of Art). Seascapes in vertical format, such as Old Watch-tower in a River Delta (1646; The Hague, Rijkscollection), in which a high, cloudy sky contrasts with flat terrain, and distant panoramic views in oblong format, such as Flat Landscape with a Windmill (1641; Schwerin), are impressive pictorial achievements. Clouds cast shadows over the earth or lakes (van Goyen never painted the open sea, only inland waters such as the Haarlemer Meer) and display the contrasting effects of light. Sailing boats occupy an important place in his compositions: in works of the early 1630s they appear in the background of quiet river scenes; by the 1640s they occupy an increasingly prominent foreground position as the river banks were made to recede (e.g. Two Large Sailboats, 1647; Paris, Louvre). In seascapes with level banks in the background, such as Fishing Boats in an Estuary (1655; Hamburg, Kunsthalle), they are essential to the illusion of perspective.

In keeping with van Goyen’s inventive and experimental temperament, he made several seascapes that include dramatic natural events, such as an approaching thunderstorm and lightning flashing across a pale yellow horizon (e.g. Storm over the Sea, 1647; Karlsruhe, Staatl. Kunsthalle). In his freely composed seascapes of the 1650s he reached the apex of his creative work, producing paintings of striking perfection. A calm sea in the still of the evening and a distant frigate firing a salute anticipate works by Willem II van de Velde, the great master of Dutch marine painting. At the end of his life, van Goyen painted seascapes in silvery grey with grey-blue shadows and touches of local colour in the figures of fishermen, the sails and the flags on the boats.

In van Goyen’s paintings his signature, often followed by a date, usually stands out boldly in the landscape or on a beam. He signed his early works I.V. GOIEN, which, from 1630, he changed to VGOYEN, and sometimes, on large works, to J. VGOYEN (in each case linking the letters VG). Usually, however, he adopted the monogram VG, first used in 1628. Dendrochronological research has shown that, unlike his contemporaries, van Goyen preferred to paint on wood panels made from freshly felled trees.

Drawings:
Van Goyen is as important as a draughtsman as he is for his paintings. His output began in 1624 with small-scale drawings in brown ink: summer landscapes (e.g. Ferry with Cart, 1624; Hamburg, Kunsthalle) and seascapes. At the same time he produced humorous genre scenes of everyday life, executed in brush and coloured washes. From 1626 he found black chalk the ideal medium to suit his fluent technique; he often brushed over the chalk outlines with grey wash, although in 1651 he used brown tones. He animated the scenes with wittily drawn figures, whose outlines capture their restless vivacity.

Van Goyen travelled the length and breadth of the Netherlands recording details of landscape and topography in chalk sketches, and his studies filled many sketchbooks. In 1648 he ventured further afield, via the mouth of the River Scheldt to Antwerp and Brussels. In 1650 he was in Cleve and Arnhem and in 1651 in Haarlem and Amsterdam, where he drew the devastation resulting from the collapse of the St Anthonis Dike. Once home, he used the results of his travel sketches to create paintings and drawings. Time and again these works demonstrate how van Goyen was able to combine different actual motifs into imaginary landscape compositions. He was not attempting to depict accurate views but rather landscapes in which topographical elements happened to feature. Drawings survive for every year of van Goyen’s creative life; in 1631, 1647, 1649 and 1651–3 he was particularly prolific. Especially popular with collectors are winter, beach and market scenes, an example of the last being Market-day near a Canal (1651; Chicago, IL, Arts Institute). His preferred paper sizes were approximately 110×190 mm and approximately 170×270 mm, and he used fine white paper; he sketched on somewhat coarser paper with different watermarks (from which dates, where missing on the drawings, can be established).

In common with the art of many of his contemporaries, the low prices van Goyen’s works commanded during his lifetime and for several generations thereafter make it difficult to assess earlier opinions of his artistic standing. He appears to have received commissions only occasionally, such as for the large View of the Valkhof at Nijmegen (1641; Nijmegen, Stadhuis) or Huis Rouwkoop on the Vliet (1642; Heemskerk, Gevers van Marquette private collection). Around 1651 he received two public commissions: he was paid 650 guilders for a large Panoramic Landscape with View of The Hague (The Hague, Gemeentemuseum) for the Burgomaster’s room in the Town Hall, and for the royal palace Honselaersdijk he produced a landscape depicting one of the royal estates in Burgundy. Not until Charles Sedelmeier’s exhibitions in Vienna (1873) and later in Paris did he achieve international recognition; after the first van Goyen exhibition in Amsterdam, held by Frederik Muller & Cie (1903), his works began to enter public collections. 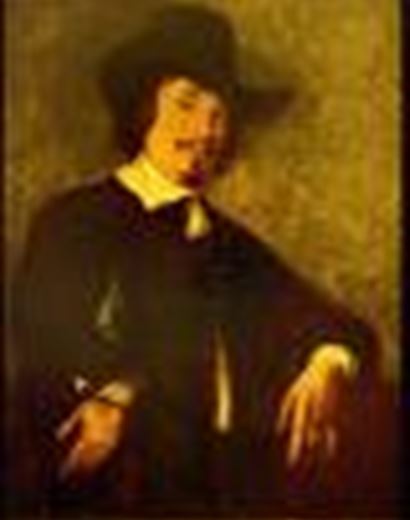