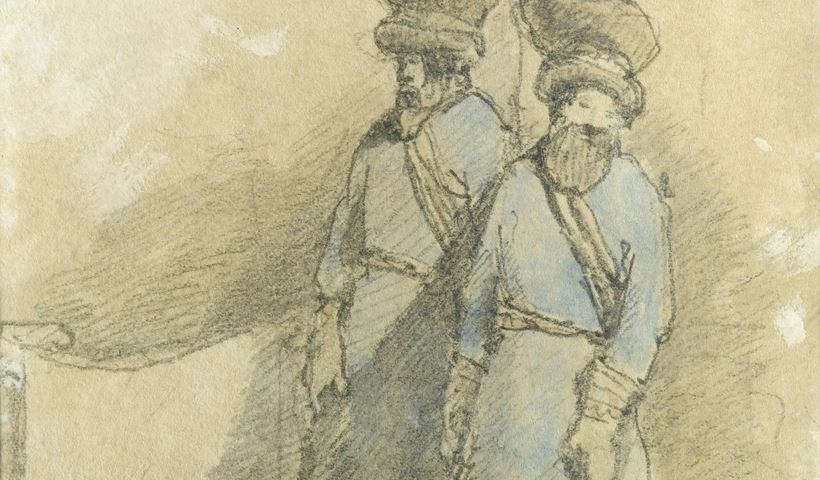 Two Cossacks on Guard & Study of a Log Sleigh 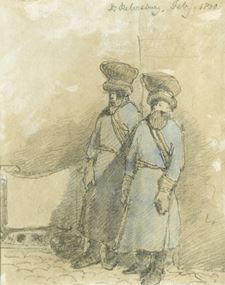 Two Cossacks on Guard & Study of a Log Sleigh

Sir John Crampton was a British diplomat. He was the eldest son of Sir Philip Crampton, 1st Baronet (1777–1858), Surgeon General to the Forces. After being educated at Eton College and Trinity College, Dublin, he entered the diplomatic service as an unpaid attaché at Turin on 7 September 1826, and was transferred to Saint Petersburg on 30 September 1828. He became a paid attaché at Brussels on 16 November 1834, and at Vienna on 9 May 1839, and was promoted to be secretary of legation at Bern on 13 December 1844. He was then transferred, in the same capacity, on 3 July 1845, to Washington, D.C., where his most important diplomatic services were rendered. He served at first under Sir Richard Pakenham, and then under Sir Henry Bulwer, successive ministers plenipotentiary. He acted as chargé d'affaires from May 1847 to December 1849, and again from August 1850 until January 1852, when Bulwer left America after concluding the Clayton-Bulwer Treaty, when he was himself appointed minister-plenipotentiary and envoy-extraordinary to the United States.
Crampton soon quarrelled with the Americans. During the Crimean War, he actively recruited troops within the territories of the USA. By 1856, Lord Clarendon, the British Foreign Secretary, had made an apology, the Americans making Crampton's recall, with three British consuls, the price of concord. On 28 May 1856, President Pierce broke off relations with Crampton, who at once returned to Britain. Palmerston reinforced the North American squadron. Some expected war, but Palmerston accepted Crampton's recall. He rewarded him with a knighthood on 20 September 1856. On 2 March 1857, Crampton was appointed minister-plenipotentiary at Hanover, and ambassador at St Petersburg on 31 March 1858.

On 10 June 1858, Crampton succeeded his father as second baronet and on 31 March 1860, he married Victoire (1837–1871), the singer, daughter of Michael William Balfe, the composer. She divorced him on the grounds of impotence in 1863. His last posting was on 11 December 1860, as minister-plenipotentiary and envoy-extraordinary at Madrid. He remained there until 1 July 1869, when he retired on a pension, after more than forty years' diplomatic service. He died, at the age of eighty-one, at his seat, Bushy Park, near Bray, County Wicklow, on 5 December 1886. As he had no children, the baronetcy became extinct.