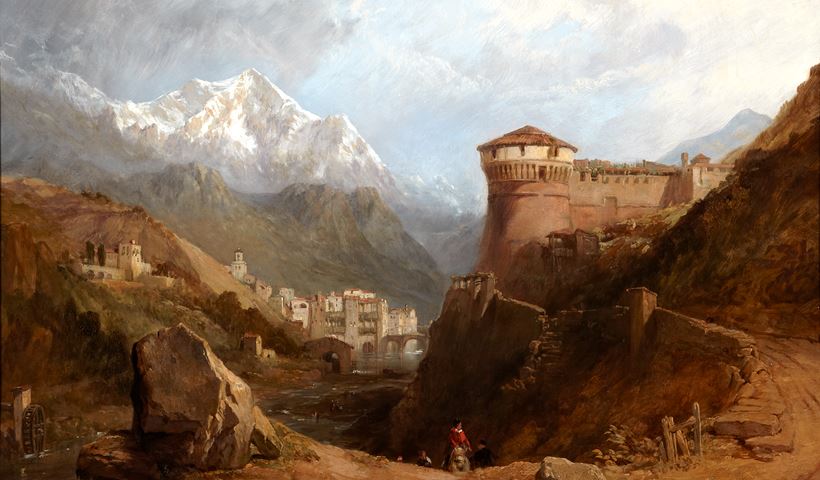 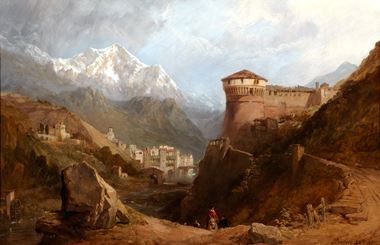 Clarkson Stanfield is often wrongly referred to as William Clarkson Stanfield. The son of Mary Hoad and James Field Stanfield, an Irish actor and author, he was apprenticed to a heraldic coach painter at the age of 12, but in 1808 he abandoned this and went to sea in a collier. In 1812 he was press-ganged and spent two years on HMS Namur, the guard-ship at Sheerness. After being discharged as the result of an injury in 1814, he joined the merchant navy, sailing to China in the Indiaman Warley in 1815. Soon after his return in 1816 he missed his ship and became a scene painter, first at the Royalty Theatre, Stepney, and then at the Royal Coburg, Lambeth. There he was later joined by David Roberts, who became a lifelong friend, and in 1822 both men were employed as scene painters at the Theatre Royal, Drury Lane. During the next 12 years Stanfield established himself as the most talented scene painter of his day, causing a sensation with some of his huge moving dioramas such as the scenes of Venice in the pantomine Harlequin and Little Thumb (1831). Meanwhile he was building an equally impressive reputation as an easel painter. He first exhibited at the Royal Academy in 1820 and continued to exhibit there regularly until his death. He was elected ARA in 1832 and RA in 1835. He was a founder-member of the Society of British Artists and became its president in 1829.

Stanfield was regarded as the greatest British marine artist of his day. The public preferred the immediacy and high finish of his sea paintings, as in A Market Boat on the Scheldt (1826; London, V&A), to the misty visions of J. M. W. Turner’s later years, and John Ruskin praised him at length in Modern Painters (1843–60), drawing particular attention to his truthfully observed skies and his astonishing ability to render the movement and transparency of water. His most impressive work is the vast Battle of Trafalgar (1836; London, United Services Club). It combines his expertise at drawing ships with the scene painter’s talent for working on a large scale. A tour de force on a much smaller scale is On the Dogger Bank (1846; London, V&A), which shows a Dutch fishing boat in gale force winds. His portrayal of stormy seas in this picture stands comparison with the work of the van de Veldes, Claude-Joseph Vernet and Turner. Other major works include Tilbury Fort—Wind against Tide (exhibited RA 1849; Port of London Authority), HMS ‘The Victory’ Towed into Gibraltar (exhibited RA 1853; private collection, see 1979 exhibition catalogue, no. 304) and The Abandoned (exhibited RA 1856; untraced), a powerful image of a dismasted ship which won a First Class Gold Medal at the Exposition Universelle, Paris (1855).

In addition to his oil paintings, Stanfield produced many watercolours, the best of which have the spontaneity of watercolours by Bonington, an artist he much admired. He also furnished illustrations for several books, notably Stanfield’s Coast Scenery (1836) and Poor Jack (1840), a collection of sea stories by Captain Marryat. In 1847 he and his family moved into the Green-Hill, a large house in Hampstead. It became a meeting-place for writers and artists including William Makepeace Thackeray, Edwin Henry Landseer, C. R. Leslie and Charles Dickens, a devoted friend who was later to describe Stanfield as ‘the soul of frankness, generosity and simplicity, the most loving and lovable of men’. Stanfield also contributed illustrations to Dickens’s Christmas books and designed sets for his amateur theatricals.