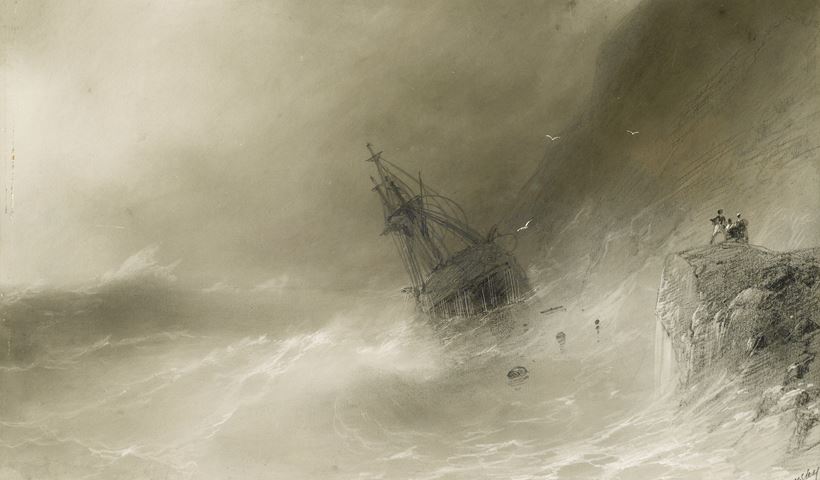 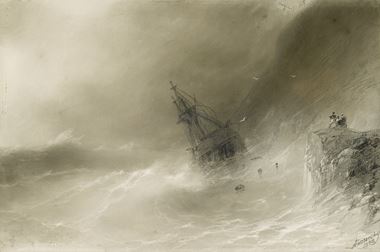 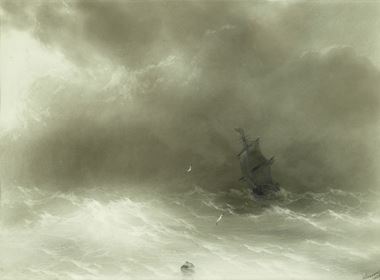 Aivazovsky's success was well-earned, for no other artist managed to capture with such brilliance, conviction and apparent ease that most difficult of subjects for the painter - the changing moods of the sea. He was a professional marine painter who spent much time by the sea and loved it deeply. Although he turned occasionally to other art forms such as landscapes and portraiture, these were only brief departures from his chosen genre to which he remained faithful all his life.

When Aivazovsky began his career, Russian art was still dominated by Romanticism and it was the romantic mood which set the terms for Russian landscape painting in the second half of the nineteenth century. It is scarcely surprising then to discover romantic elements both in Aivazovsky's early works, and in the majority of his later ones. One reflection of this is his choice of subjects: again and again we find him depicting shipwrecks, raging sea battles and storms.

Aivazovsky continued in the tradition of the great Russian landscape painters of the early nineteenth century without recourse to imitation. He created a new tradition, a new school of painting, thus making his mark on the marine painting of his own and subsequent generations.

Apart from his work as an artist, Aivazovsky was a tireless and versatile public figure: he took an eager interest in world events and sympathised deeply with small nations struggling for their independence. At the same time he worked selflessly for the good of his native town and did much to assist young artists.

Aivazovsky was born on 17 July 1817 (29 July New Style) in the ancient Crimean town of Theodosia. Some early drawings attracted the attention of A. Kaznacheyev, the town-governor, who helped Aivazovsky to enter the high school at Simferopol and in 1833, the St. Petersburg Academy of Arts.

The great success of Karl Bryullov's picture The Last Day of Pompeii made a lasting impression on Aivazovsky, summing up as it did the victory of the Romantic school in Russian painting. Both the picture and Bryullov himself played an important part in stimulating Aivazovsky's own creative development. Furthermore, Aivazovsky was brought up in the romantic spirit by his teacher in the Academy landscape class, M. Vorobyov. In general Russian art of the first half of the nineteenth century combined Romanticism with Realism and very often both principles found expression in an artist's works. This was especially evident in landscape painting, an essentially realist art form which continued romantic features for a long time. Aivazovsky acquired a romantic outlook in his student years and maintained it in maturity. He remained to the end one of the most faithful disciples of Romanticism, although this did not prevent him from evolving his own form of realism.

In October 1837 Aivazovsky completed his studies at the Academy and received the great gold medal, which gave him the right to a prolonged course of study abroad at the expense of the Academy. Bearing in mind the peculiar nature of Aivazovsky's gift, the Council of the Academy took an unusual decision. To begin with, the artist was to be sent to the Crimea for two summers; there he was to perfect his skills in his chosen genre by painting views of the coastal towns while sending his pictures each year to the Academy. Only after this was he to leave for Italy.

While still a student, Aivazovsky had been attracted by the romance of sea battles and the proud beauty of sailing ships. His work in Sauerweid's class and participation in the exercises of the Baltic Sea fleet had encouraged him still further. In the Crimea Aivazovsky now had the chance to return to his favourite themes. The commander of the Caucasus Coast Line, N. Rayevsky suggested to Aivazovsky that he take part in the exercises of the Black Sea fleet. During 1839 he went to sea three times, painted a great deal from nature, and made the acquaintance of admirals M. Lazarev, V. Kornilov and P. Nakhimov.

During a trip to Italy in 1842 the famous English marine painter, Joseph Mallord William Turner was so struck by the picture The Bay of Naples on a Moonlit Night that he dedicated a rhymed eulogy in Italian to Aivazovsky:

In this your picture
Of a mighty king!

I see the moon, all gold and silver.
Forgive me if I err, great artist,

Reflected in the sea below...
Your picture has entranced me so,

And on the surface of the sea
Reality and art are one,

There plays a breeze which leaves a trail
And I am all amazement.

Of trembling ripples, like a shower
So noble, powerful is the art

Of fiery sparks or else the gleaming headdress
That only genius could inspire!

Aivazovsky enjoyed equal success when he brought his pictures to Paris in 1842, having been granted permission from the Academy. The Council of the Paris Academy awarded him first their gold medal, then, in 1857, the Legion of Honour—an order rarely conferred on foreigners. Horace Vernet, the well-known French battle-painter, told Aivazovsky that his talent was a credit to his native land.

Aivazovsky's unusual ability to be true to nature amazed his contemporaries, particularly his ability to convey the effect of moving water and of reflected sun, as well as moonlight. In short it was his accurate, but at the same time highly-charged and dramatic depiction of the sea that was most striking. However, Aivazovsky took some time to discover the secret of creating such impressive images. All his student years and the beginning of his foreign scholarship had been devoted to the pursuit of his technique.

In 1844 Aivazovsky asked permission to return home prematurely from his European tour and he set off for Russia via Holland. In Amsterdam he organized an exhibition of his pictures; it was a great success and the Amsterdam Academy honoured him with the title of academician. Once back in St. Petersburg, the Council of the Academy also bestowed on him the title of academician and by the Tsar's edict he was attached to the Chief Naval Staff "with the title of painter to the Staff and with the right to wear the uniform of the naval ministry". Immediately Aivazovsky was commissioned to paint views of Kronstadt, Revel (now Tallinn) and other places on the Baltic coast. The result was a series of large-scale canvases in which Aivazovsky succeeded in combining accurate topographical information with a poetic mood.

Some forty years after settling permanently in Theodosia, Aivazovsky financed the erection of the picture gallery there which bears his name. It now houses 130 pictures and 270 sketches by Aivazovsky himself, as well as works by Lagorio, Vessler, Latri, Voloshin, Bogayevsky and others connected with the eastern Crimea, a place of ancient culture and severe but picturesque landscapes.

The years 1846 to 1848 witness a series of outstanding canvases devoted to battles at sea, all based on the heroic past of the Russian fleet, for example, The Battle of Chesme, depicting a sea battle at night. The defeated Turkish fleet set alight by a Russian fire-ship is an unusually impressive spectacle, Aivazovsky's mastery of light effects being used to the full.

Aivazovsky maintained his capacity for work, his energy and lively creative intelligence until the very end of his life. All in all he painted more than 6,000 pictures and a multitude of skillfully executed drawings. 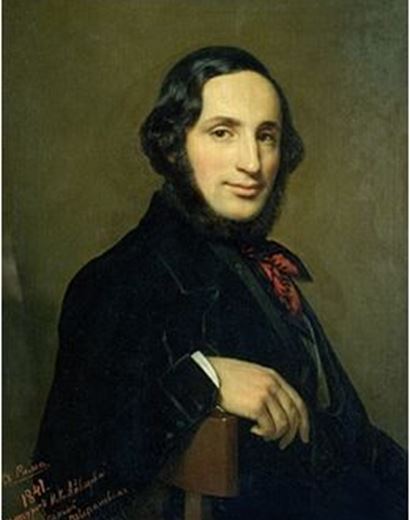