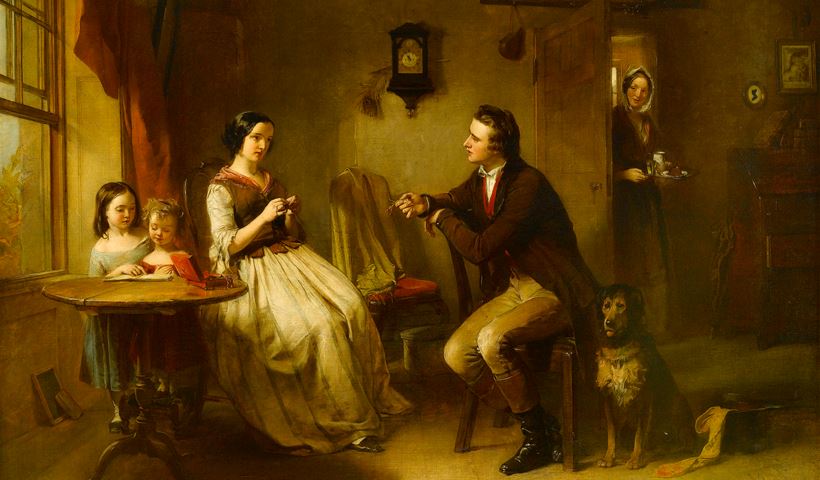 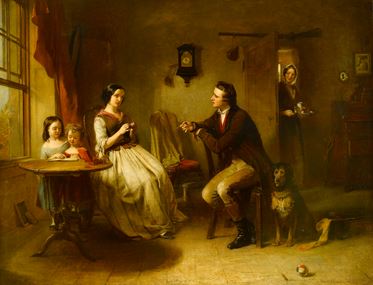 Stone was the son of a cotton-spinner, who took up art in 1824 and was apparently self-taught. He settled in London in 1831. His early work involved producing drawings for Charles Heath’s Books of Beauty (1833–47), but by 1833 he was exhibiting at the Old Water-Colour Society. His initial entries at the British Institution in 1835 were genre subjects, while his first contributions to the Royal Academy in 1837 were portraits. Occasionally he treated literary themes, as in Scene from ‘A Legend of Montrose’ (1840), Scene from ‘Hamlet’ (1845) and Scene from ‘The Tempest’ (1850–51; all untraced). Sometimes he produced religious subjects, such as Christ and the Sisters of Bethany (1848; untraced).

Stone was acquainted with many London artists and writers, some of whose portraits he painted, including William Thackeray (c. 1839; London, National Portrait Gallery) and the poet Samuel Rogers in Samuel Rogers, Mrs Norton and Mrs Phipps (oil sketch, c. 1848; London, National Portrait Gallery). Stone was a close friend of Charles Dickens and often helped Dickens in his theatrical productions. He travelled with the novelist in 1847 on a tour of amateur performances in the north of England. In 1848 he contributed illustrations to Dickens’s The Haunted Man, in which one of the characters, Sairey Gamp, describes Stone as ‘a fine-looking, portly gentleman, with a face like an amiable full moon’.

Stone’s watercolours and canvases proved popular because of their pretty sentimentality, whether of ‘Keepsake’ ladies or romantic and domestic themes. He usually painted only one or a few figures in considerable detail, combining physical beauty with some degree of narrative content. Themes of courtship were recurrent in his work, and his first success in this category was the Bashful Lover and the Maiden Coy (exh. London, British Institution, 1842; untraced); this was followed there by the Approaching Footstep (1845) and, at the Royal Academy, by a string of pictures beginning with Admonition (1842). His best-known achievements in this genre include the Last Appeal (1843), the Course of True Love Never Did Run Smooth (1844), and the Impending Mate and Mated (1847; all untraced); some of these and other oil paintings were engraved and gained favour with the public.

Stone established a summer residence in Boulogne c. 1853, and this change of scenery affected his subject-matter to some degree. Scenes of flirtatious encounters and drawing-room vignettes gave way to such works as The Mussel-gatherer (1854; untraced), and fisherwomen replaced faint-hearted Victorian ladies in Stone’s repertory. However, in the last years of his life the artist sometimes returned to what the London Art Journal had called his ‘love-pictures’, as in Friendship Endangered (1858; private collection, see Wood, p. 734).

Collections:
Stone is represented in the following collections: National Portrait Gallery, London; amongst others.