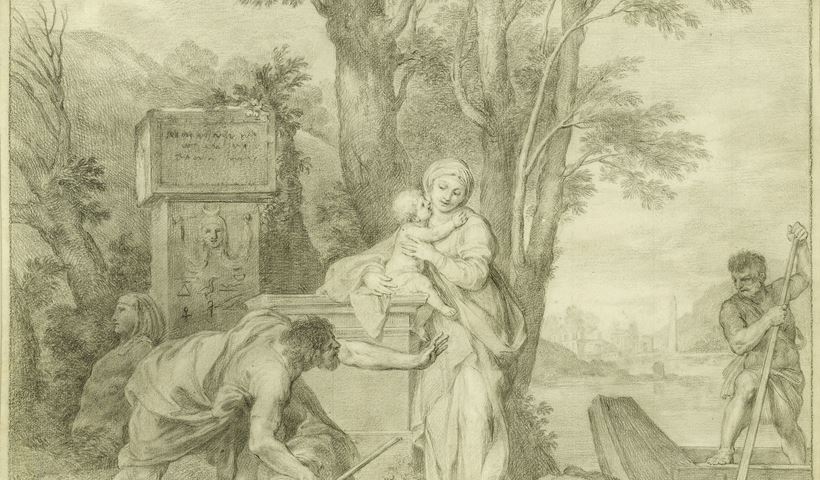 The Rest on the Flight into Egypt 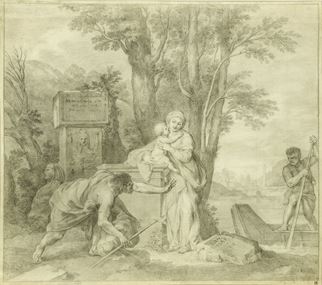 The Rest on the Flight into Egypt

Tommaso Maria Conca was born in Gaeta, in central Italy, in 1734. Early on, he moved to Rome, where he studied with his older cousin Sebastiano Conca after 1748. Tommaso, following in the footsteps of Sebastiano, represents a fusion of certain Napolitan and Roman trends and is an exemplar of the Roman late Baroque style.

After experimenting with the many conflicting artistic currents swirling around Rome at the time of his arrival, Tommaso settled firmly into the camp of the classicists, chief among whom was Anton Raphael Mengs. Although Conca did not study with Mengs, he was strongly influenced by the older artist and may have collaborated with him, soon after his arrival in Rome, on the decoration of the coffeehouse of the Villa Albani. Cultivated and personable, Conca's wide interests included poetry, archaeology, and the sciences. He was elected to the Accademia Clementina in Bologna in 1765 and to the Accademia di San Luca in Rome in 1770, serving as principe of the latter organization from 1792 to 1795.

It is chiefly as a decorative painter that he is known. His first major project was for the casino of the Villa Borghese in 1775-78, which he embellished with decorative frescoes, both mythological and biblical, as well as carrying out the grisaille decoration. Fortunately, he was noticed by Pope Pius VI, who was looking for artists to decorate his ambitious new Vatican sculpture museum, the Museo Pio-Clementino. In 1795 Conca won the major commission for the project, which was to decorate the vault of its Sala delle Muse.

Conca then moved to Città di Castello, where between 1795 and 1797 he frescoed the dome and transept of its cathedral with complex Christian allegories. In 1812 he helped to decorate an apartment for Napoleon Bonaparte in the Palazzo del Quirinale in Rome. Traditional in method and conservative in outlook, he was awarded a knighthood around 1790. He was active in the Accademia di San Luca and the Accademia Napoletana in Rome and devoted considerable energy to educating young artists and supervising the pensionati (students studying there).

He flourished in Rome for some fifty years, dying there in 1822.