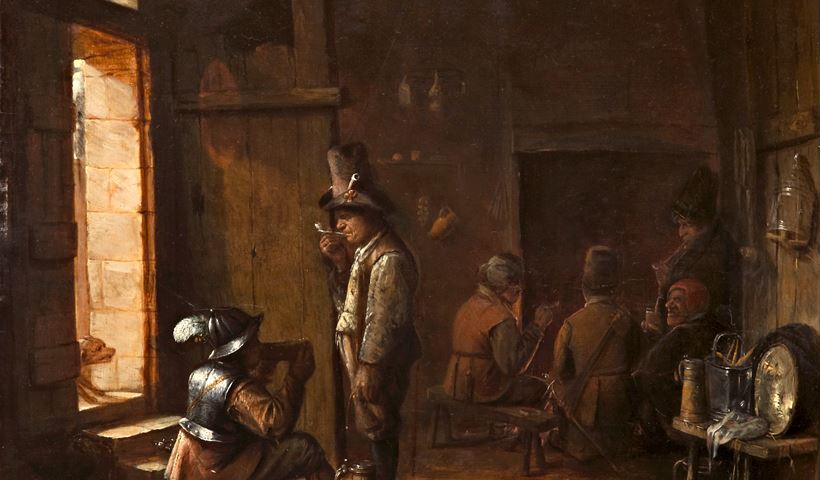 An Interior of an Inn with a Peasant Smoking a Pipe and a Soldier Drinking, other Figures Smoking and Drinking in the Background 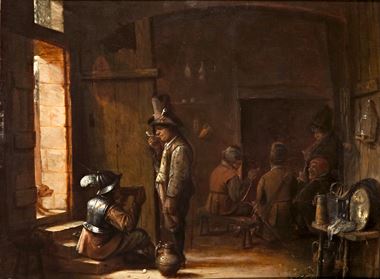 An Interior of an Inn with a Peasant Smoking a Pipe and a Soldier Drinking, other Figures Smoking and Drinking in the Background

Flemish painter Joos van Craesbeeck was the son of an alderman and baker. In 1631 he became a citizen of Antwerp and was entered as a journeyman baker, probably at the age of about 25, though a Self-portrait in front of a Mirror (previously at the Kunsthalle, Bremen; now untraced) had an old inscription on the back (not in the artist’s hand) stating that Craesbeeck was 39 in 1647. He married Johanna Tielens, the daughter of the deceased Antwerp prison baker, in the chapel of Het Gasteel, the Antwerp prison, in January 1631. In 1633–4 he was enrolled as a baker and painter in the Guild of St Luke at Antwerp, and in 1637 he was listed as the proprietor of a new house with a bakery there. He subsequently moved to Brussels, where he became a master in the painter’s guild in 1651. In 1653–4 he registered two pupils with the guild.

According to de Bie and Houbraken, Craesbeeck was probably taught by Adriaen Brouwer; he may have met him in 1633 when Brouwer was in prison for tax debts (Craesbeeck baked bread for the prison). This is also borne out by a certain stylistic similarity in his early pictures to Brouwer’s work. Like Brouwer, Craesbeeck found his subject-matter in tavern interiors with simple people, but he subsequently turned completely to the middle-class world, which was depicted both carousing at the inn and in domestic genre scenes. He occasionally painted a studio scene (e.g. Artist’s Studio, Fondation Custodia, Institute Néerlandais, Paris) and there are a few New Testament stories, such as the Massacre of the Innocents (Linz, Abbey of St Florian) and Ecce homo (sold London, Christies, 14 May 1971, lot 43), painted in the style and manner of the Rembrandt school. There is also the occasional unmistakable Christian allegory among the genre pictures, such as Brawl at an Inn: ‘Death is Fierce and Quick’ (Antwerp, Koninklijk Museum voor Schone Kunsten).

The Company of Drinkers (Kassel, Schloss Wilhelmshöhe) is signed with Craesbeeck’s full name, and about 30 other paintings have the monogram cb or jvcb (e.g. Flemish Tavern and At the Antwerp Arms, both Antwerp, Koninklijk Museum voor Schone Kunsten). However, except for the missing Self-portrait in front of a Mirror, none of the pictures is dated, nor is it possible to link them to a fixed date; their chronology is therefore hard to establish with any certainty. Pictures that still show the influence of Brouwer clearly must be earlier. At first, the figures correspond to Brouwer’s figure types (e.g. Peasant in a Felt Hat, Berlin, Bodemuseum). In Peasants Smoking (Munich, Alte Pinacothek) Craesbeeck treated the same subject as Brouwer, like him concentrating on depicting the emotions revealed in the expression, but failing to achieve the same trenchancy and sureness of touch. The composition of the picture, with its four figures, is also reminiscent of Brouwer, and the colouring follows Brouwer’s later works in the subtly harmonized toning with occasional gleaming highlights. The technique is also influenced by him, especially the thin application of colour that often leaves the ground partly visible. Craesbeeck’s Smoker (Paris, Louvre), directly influenced by Brouwer’s The Smokers (New York, Metropolitan Museum of Art), is a facial study of a smoker with eyes rolling and an open mouth with smoke welling up out of it.

Brouwer’s influence is less evident in paintings that are obviously later. The colours used tend increasingly towards browns and greys. Probably following on from that phase, carried out under the influence of painting in Brussels, is a group of pictures in vivid colours: dazzling white, yellow, a cool light blue and salmon red dominate the palette. In his mature work, which was independent of Brouwer, Craesbeeck used an individual, unmistakable and firmly established repertory of figures that makes his work easy to recognize: bearded men with flat or fur-decked caps, women with white bonnets or a particularly conspicuous straw hat. In these pictures, too, he tried to emulate Brouwer’s mimic narrative, but the rolling eyes and roaring mouths never achieve the deft trenchancy of his model.