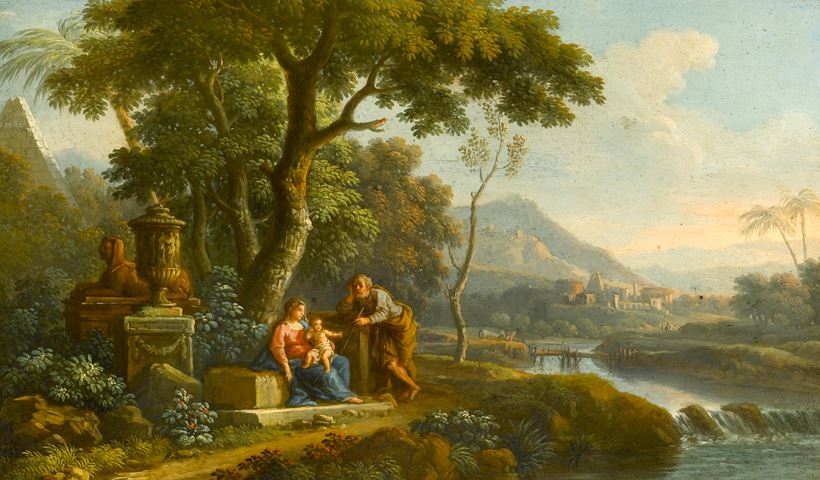 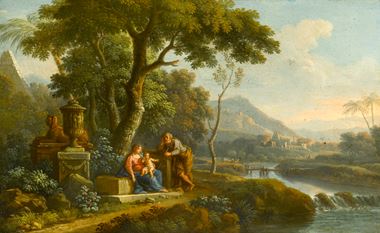 Jan Frans van Bloemen was a member of a Flemish family of painters and draughtsmen. He was also active in Italy and France and was the brother of Pieter van Bloemen. While still in their native Antwerp, Pieter was the first teacher of his brother Jan Frans — who later also studied with Antoine Goubau — and probably also of his younger brother Norbert (1670-c. 1746). Jan Frans was soon summoned to Lyon by his brother and is said to have worked with van der Cabel in the city. It was only once Jan Frans reached Italy, however, that he would be given the moniker "Orizzonte" (the Italian word for "horizon"), which reflected his proficiency in producing panoramic landscapes.

Although patronised by aristocratic Roman families, Orizzonte’s artistic career was marred by his prolonged confrontation with the Accademia di San Luca. The precise reasons for the difficulties are unknown, but he was only finally accepted by the Accademia at the age of 80, after his third application for membership.
Orizzonte was inspired by the classicising landscape paintings of Gaspard Dughet, as well as by the beauty of Rome and the surrounding campagna. With the Flemish landscape tradition as his foundation, he easily absorbed Dughet’s dynamic and analytical style, producing such works as Landscape with Ruins, Nocturnal Landscape and the Storm (all Rome, Palazzo Doria-Pamphilj). Some of Orizzonte’s views, painted at the end of the 17th century, anticipate the vedute (view paintings) of the 18th century and mark a shift from the classically orientated Roman landscapes of his French predecessors in Rome. In pictures such as the View of Gardens with Statues (Schloss Wörlitz, near Dessau) and the Landscape with the Colosseum (Rome, Galleria Pallavicini), there is a more realistic representation of views, and the paintings show characteristics close to those of Andrea Locatelli, Giovanni Paolo Panini and Paolo Anesi. Around 1730 Orizzonte began to adapt his delicate and sensitive style towards a calmer and more synthetic artistic vision, some features of which were borrowed directly from Poussin, as in the Landscape with the Belvedere of the Vatican (Rome, Galleria Pallavicini) and the Landscape with Temple (Tivoli, Villa d’Este). Among the painters who provided figures for his landscapes were Carlo Maratti, Placido Costanzi and Pompeo Batoni.

Considered a great artist by his contemporaries, Orizzonte produced some of the finest classical landscape painting in Rome during the first half of the eighteenth century. His numerous Italianate landscapes are distributed in museums and private collections throughout Europe, many being in England. His pupils, for example Francesco Oelefe, known as ‘Bavarese’, Gabriele Ricciardelli and Nicolo Bonito, all imitated his style.