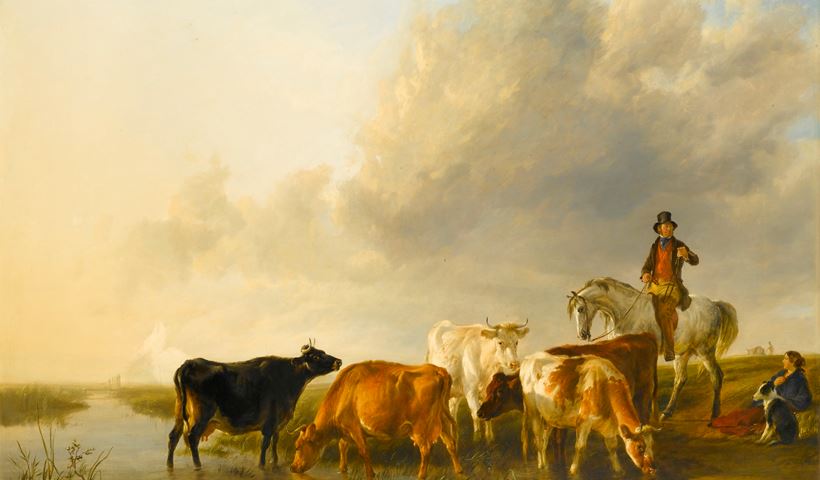 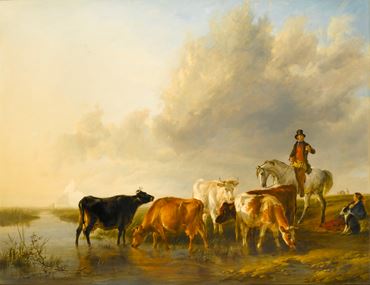 Thomas Sidney Cooper was encouraged in his ambition to become an artist by Sir Thomas Lawrence and the animal painter Abraham Cooper (no relation; 1787–1868). He entered the Royal Academy Schools, London, in 1823. He subsequently taught art in Brussels where he met Eugene Verboeckhoven, whose work had a profound influence on him. Through Verboeckhoven he came to appreciate the work of such 17th-century Dutch painters as Aelbert Cuyp and Paulus Potter. In 1831 he returned to London, exhibiting at the Royal Society of British Artists. He exhibited 48 pictures at the British Institution between 1833 and 1863. The majority of his work was, however, exhibited at the Royal Academy; from 1833 to 1902 he exhibited 266 works there without a break, and he remains the longest continuous exhibitor in the Academy’s history. He was elected ARA in 1845 and RA in 1867.

Cooper’s paintings were almost exclusively of cattle (he was nicknamed ‘Cow’ Cooper to distinguish him from Abraham ‘Horse’ Cooper) and sheep, for example Landscape, with Cows and Sheep (1850; Egham, University London, Royal Holloway & Bedford New College). He produced one history painting, The Defeat of Kellerman’s Cuirassiers at Waterloo (1846; Birkenhead, Williamson Art Gallery & Museum). He also painted animals in landscapes by other artists, notably Frederick Richard Lee (1798–1879) (e.g. Lee’s The Chequered Shade, 1854; London, Forbes private collection). Despite his preoccupation with animal painting and his prodigious output the quality of Cooper’s work remained surprisingly high. The contents of his studio were sold at Christie’s, 12–15 April 1902. 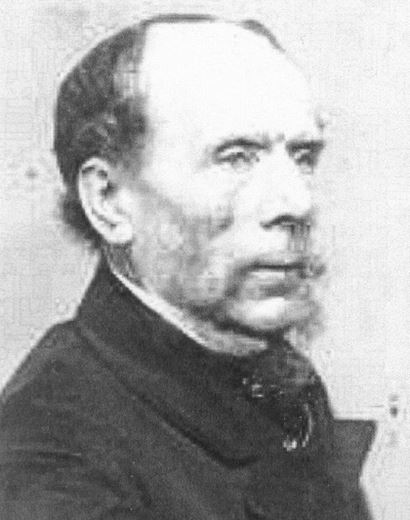