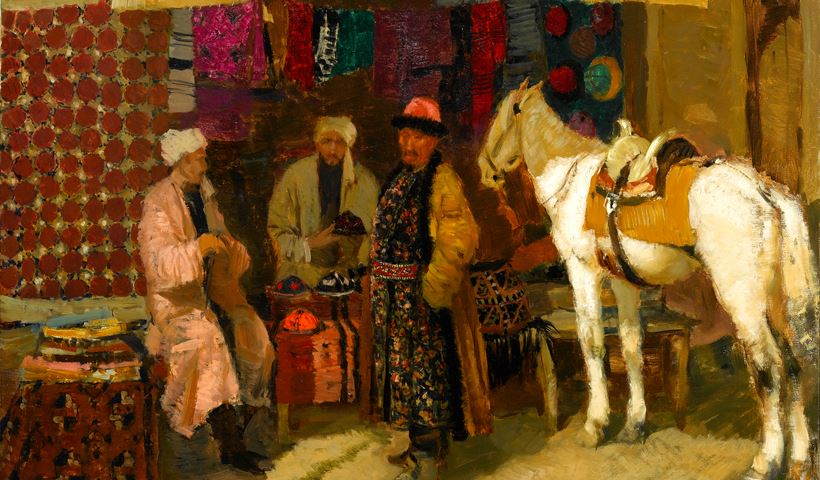 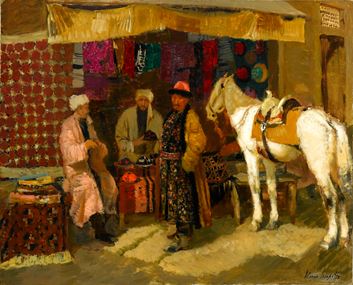 Issupoff was born in Vyatka (now Kirov) into the family of a master iconostasis maker, and his first teachers were icon painters. Under the influence of another local artist, the already renowned painter Apollinary Mikhailovich Vasnetsov, his art started to develop a more independent streak, and his work began to appear in the first Vyatkan art exhibitions. As a result of this initial success Issupoff decided to move to Moscow to study, although he had sell sketches to fund the trip, as his parents weren’t able to financially support him. In 1908 he enrolled in the Moscow School of Painting, Sculpture and again came to the attention of Vasnetsov, who, although some thirty years Issupoff’s senior and at the height of his career, recognised the young man’s talent and introduced him into his artistic circle. Vasnetsov “would invite the young man for a cup of tea – to pass evening hours in talks about art... those were like evening classes in art history...”. Issupoff flourished in Moscow, through either direct contact with teachers such as Vasnetsov and Konstantin Alekseyevich Korovin (1861-1939), or through exhibitions, where he encountered the work of Philip Andreyevich Maliavian, whose use of light and colour was to prove extremely influential.

Issupoff first visited Central Asia when he was sent to Tashkent in 1915 as part of his military service. Although he returned to Moscow two years later, having been discharged due to ill health, he returned to Uzbekistan as soon as possible with his wife. Irina Lyubimova surmises his the development in his work of this period, saying “By studying various ethnic types – their everyday life, clothes, and household effects – he broadened the thematic range of his paintings. Isupov depicted noisy markets, teahouse, blacksmith shops, street scenes, and architectural landmarks. His palette also grew richer...The artist paints landscapes in brief quick brushstrokes that create the effect of vibrating air, light and colour, and he achieves a sense of luminous overtones.” During his time in Central Asia he also became director of the Art Department in the Committee of Restoration and Protection of Monuments in the City of Samarkand, a role that allowed him to truly immerse himself in the city’s cultural history.

In 1921 Issupoff returned to Moscow but struggled both financially, and to commit himself to do work for the new Soviet state. After five difficult years he left for Italy on doctors’ recommendations and here he artistically flourished once again. His art still remained rooted in his homeland, with Russian references and motifs populating his work, and it was known that he longed to return home, although he never did. He found it especially difficult during World War II, living under a Fascist regime and he actively helped the resistance. Despite this he was a critical and commercial success in his adopted country, praised for his “wide brushstroke, fine detail, striving towards the truth” and “gentleness of colour”. He died in Rome in 1957 and was buried alongside other Russian artists, including Karl Pavlovich Bryullov.