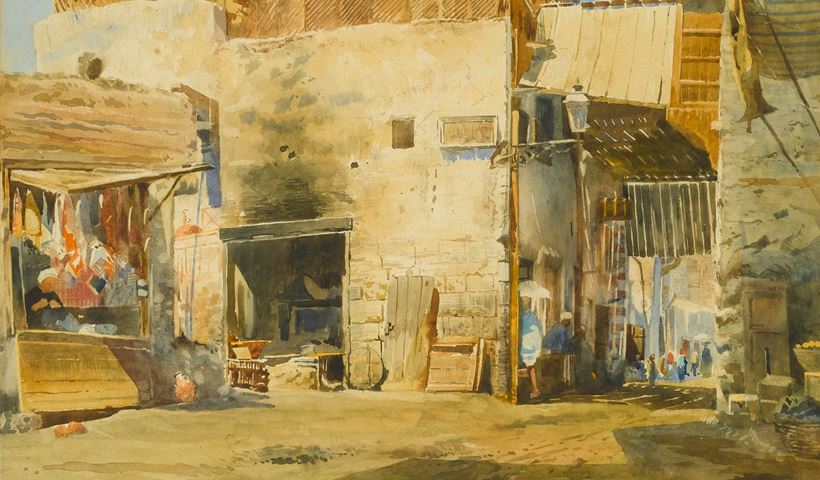 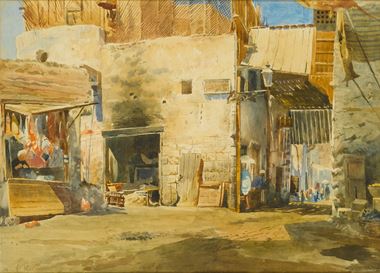 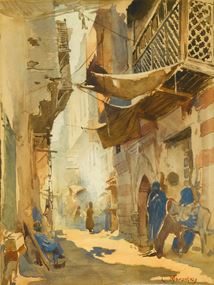 A Study for ‘A Street Scene in Cairo’ 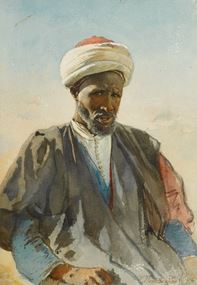 Portrait of an Arab 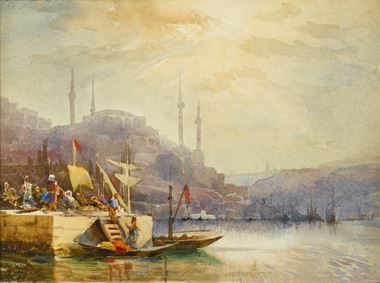 Unloading Boats on the Bosphorus

Konstantin Yegorovich Makovsky was an influential Russian painter, affiliated with the "Wanderers". Many of his historical paintings, such as The Russian Bride's Attire (1889), showed an idealized view of Russian life of prior centuries. He is often considered a representative of a Salon art.

Konstantin was born in Moscow as the older son of a Russian art figure and amateur painter, Yegor Ivanovich Makovsky. Yegor Makovsky was the founder of Natural class the art school that later became as the famous Moscow School of Painting, Sculpture and Architecture. Among the friends of the family were Karl Briullov and Vasily Tropinin. All children of Yegor became notable painters, like his equally famous brother Vladimir. Later Konstantin wrote ‘’For what I became I think I should thank not the Academy or Professors but only my father.’’

In 1851 Konstantin entered the Moscow School of Painting, Sculpture and Architecture where he became the top student, easily getting all the available awards. His teachers were ¿M.I. Skotty, A.N. Mokritsky, S.K. Zaryanko, all of them pupils of Karl Brullov. Makovsky's inclinations to Romanticism and decorative effects can be explained by the influence of Briullov.

In 1858 Makovsky entered the Imperial Academy of Arts in Saint Petersburg. From 1860 he participated in the exhibitions of Academia with paintings such as Curing of the Blind (1860) and Agents of the False Dmitry kill the son of Boris Godunov(1862). In 1863 Makovsky, together with the other 13 students eligible to participate in the competition for the Large Gold Medal of Academia, refused to paint on the set topic in Scandinavian mythology and instead left Academia without a formal diploma.

Makovsky became a member of a co-operative (artel) of artists led by Ivan Kramskoi, typically producing Wanderers paintings on everyday life (Widow 1865, Herring-seller 1867, etc.). From 1870 he was a founding member of the Society for Traveling Art Exhibitions and continued to work on paintings devoted to everyday life. He exhibited his works on both the Academia exhibitions and the Travelling Art Exhibitions of the Wanderers.

A significant change in his style occurred after traveling to Egypt and Serbia in the mid-1870s. His interests changed from social and psychological problems to the artistic problems of colors and shape.

In the 1880s he became a fashioned author of portraits and historical paintings. At the World's Fair of 1889 in Paris he received the Large Gold Medal for his paintings Death of Ivan the Terrible, The Judgement of Paris and Demon and Tamara. He was one of the most highly appreciated and highly paid Russian artists of the time. Many democratic critics considered him as a renegade of the Wanderers' ideals, producing (like Henryk Siemiradzki) striking but shallow works, while others see him as a forerunner of Russian Impressionism.

Makovsky became a victim of a road accident (his horse-driven carriage was hit by an electric tram) and died in 1915 in Saint Petersburg. 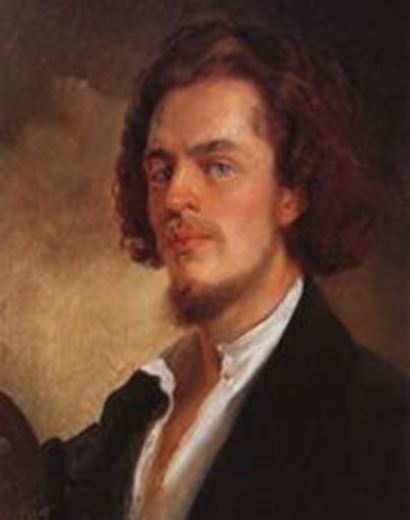