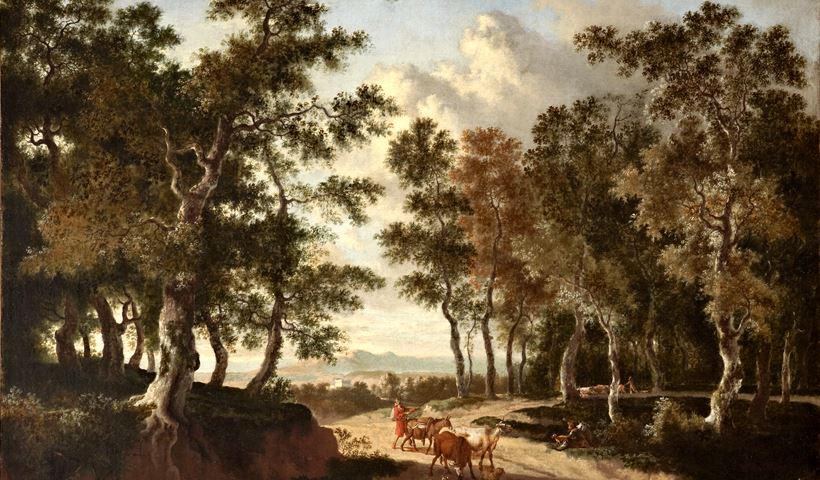 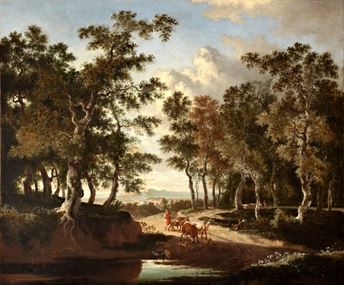 Jan Hackaert was a Dutch painter, draughtsman and etcher. The earliest information about Hackaert indicates that he visited Switzerland several times between 1653 and 1656; he probably did not go to Italy, as was long supposed. By 1658 he was back in Amsterdam. When in Switzerland, he made several large topographical drawings. Many of these drawings, which give a good sense of space but are somewhat dry in execution, were probably made for the multi-volume atlas of laurens van der Hem, an Amsterdam lawyer who commissioned topographical views from several artists.

Hackaert’s paintings may be broadly divided into two categories: Italianate landscapes and woodland scenes. Both genres were much influenced by the landscapes of the Dutch Italianates Jan Both and Jan Asselijn, especially in the treatment of colour. An example of the first category is the Lake of Zurich (c. 1660–64; Amsterdam, Rijksmuseum); this masterpiece is exceptional in depicting a topographical view in an idealized style. In the later Landscape in the Campagna with Cattle (c. 1670; Berlin, Gemäldegalerie), the slender, graceful trees, with their light foliage bathed in brilliant southern sunshine, are reminiscent of Both.

Similar trees and sunlight can be seen in Hackaert’s woodland scenes, in which he generally made use of a sous-bois composition: painting the underside of the leafy canopy has the effect of drawing the spectator into the forest. The Deer-hunt in a Wood (c. 1660; London, National Gallery), despite the density of the foliation, achieves an impressive sense of space by the depiction of sunlighational penetrating the trees. Hackaert’s staffage, which in this case was painted by Nicolaes Berchem (who also signed the picture), is often attributed to other artists (e.g. Adriaen van de Velde and Johannes Lingelbach). The Avenue of Birches (c. 1675–80; Amsterdam, Rijksmuseum) is an example of Hackaert’s more open woodland views. It depicts a hunting party in an avenue alongside a stretch of water bordered by slender birch trees; a soft golden light suffuses the whole view. Hackaert’s forest landscapes with hunting scenes show more originality than his Italianate landscapes and were very popular on the contemporary art market, largely because they reflected the prosperity and affluent leisure pursuits, real or coveted, of the prospective buyers.

Besides the Swiss topographical drawings, Hackaert made several other drawings in the style of Jan Both, some of whose works he owned and copied. These drawings are sketchier, broader and lighter in execution than his topographical work. Seven etchings by him are also known, all showing northern European landscapes. According to Hofstede de Groot, Hackaert’s latest signed work dates from 1685, in which year, or soon after, he is assumed to have died.