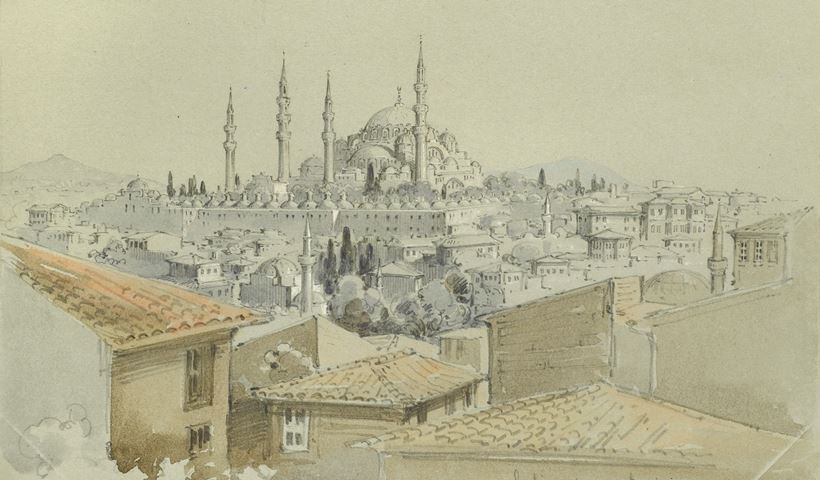 View of the Süleymaniye Mosque over Rooftops 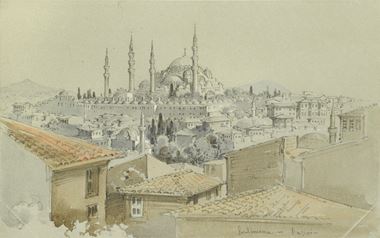 View of the Süleymaniye Mosque over Rooftops

Count Amadeo Preziosi was descended from a family which had migrated from Corsica to Malta in the 17th century and been awarded a title by the king of Sicily. Preziosi was born in Valetta on 2 December 1816, and spent his childhood and youth in Malta. His father Count Gio Francois was an eminent figure in Malta and a wealthy man.

Preziosi was educated by private tutors, and his passion for drawing and painting began as a child. Although he studied law in compliance with his parents’ wishes he eventually abandoned this profession to devote himself to painting, first entering the studio of Giuseppe Hyzler, and subsequently going to France to complete his art education at the Paris Academy of Fine Arts. This was a time when European painters were flocking to the Gateway to the East, as Istanbul was known, and under this influence Preziosi packed up his paints and brushes and set out from Malta in 1842, travelling first to Italy and then to Istanbul.

He notes in his memoirs that his original intention had been to stay for two years, but so absorbed did he become in the sights and bewitching atmosphere of Istanbul that it held him like a magnet, and he hardly noticed the passing of the years. Sketchbook under arm he wandered its streets, caught up in an increasing love for the city and its people. Istanbul returned Preziosi’s affection, and he was welcomed everywhere, in tiny back street shops, coffee houses, hamams (Turkish baths), and places of worship. In his canvases he immortalised the humdrum sights of daily life: a street seller, a dancing bear, a woman filling her water jar at a street fountain. Through his eyes we also see the blue waters of the Bosphorus with caiques gliding along, pavilions and palaces. His paintings sold well among local and foreign customers alike, who hung them on the walls of their grand houses and palaces.

Despite his father’s entreaties Amadeo Preziosi refused to return to Malta, where the other members of his family followed ‘respectable’ careers as doctors, merchants and lawyers. He remained loyal to the passionate loves of his life: Istanbul and painting.

As well as his mother tongue of Italian, Preziosi spoke French, Greek, English and Turkish. He married an Istanbul Greek woman and the couple had four children, three girls and one boy. For many years they lived in Beyoglu, at number 14 Hamalbasi Sokak near the present British Consulate.

In 1882, at the age of 65, he accidentally dropped his rifle at a hunt. It went off, causing injuries of which Preziosi died the following day.