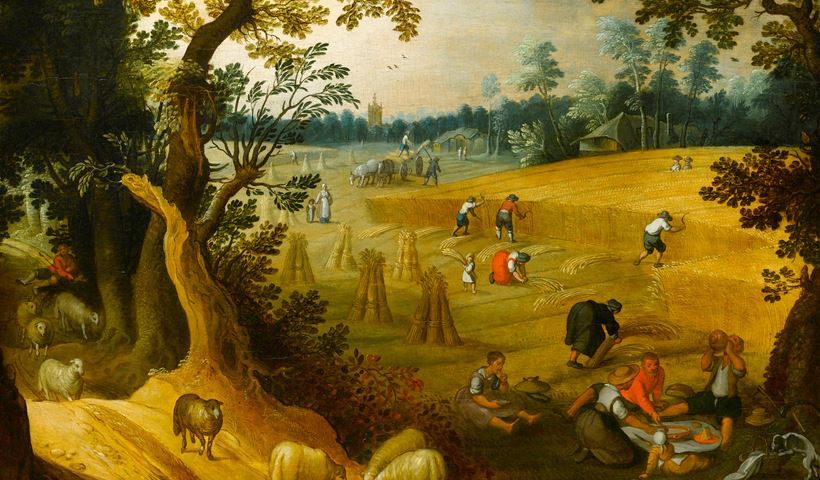 An Allegory of Summer 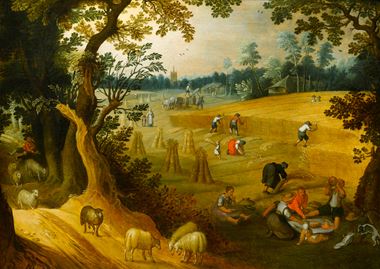 An Allegory of Summer

Abel was the son of Jacob Grimmer, and he married Catharina Lescornet on 29 September 1591, before becoming a master in the Antwerp Guild of St Luke in 1592. He is principally known for his numerous small paintings of country scenes, sometimes with a biblical theme, which often form part of a series of the Four Seasons or the Months of the Year. Some of these paintings were inspired by or even copied from prints by Pieter Bruegel I and Hans Bol, both of whose work strongly influenced Abel, even more so than did the example of his father’s work, which was also an important source of inspiration. Abel’s series of the Twelve Months (1592; Montfaucon-en-Velay, Haute-Loire, Chapelle Notre-Dame) are exact copies of Adriaen Collaert’s prints after Hans Bol (Hollstein: Dutch & Flemish, iv, nos 523–34), published by Hans van Luyck (fl c. 1580–85) in 1585.

The tendency to simplify and systemize both figures and landscapes is even stronger in Abel’s work than in Jacob’s. Abel’s decorative landscapes are typified by splendid colour harmonies and a certain linearity, which is expressed in the slightly schematized compositions and the tendency to represent buildings as geometric shapes. This linear quality may reflect the artist’s interest in architecture, which is also revealed in a number of paintings of church interiors by him. These works, for example Interior of a Gothic Church with a Franciscan Monk Preaching (sold London, Sotheby’s, 9 March 1983, lot 3), are particularly successful; the interest in perspective and the use of a golden light anticipate the work of Pieter Saenredam. Two autograph architectural drawings (ex-Paul Saintenoy private collection, Brussels, before 1900), an elevation of the gable of Antwerp Cathedral and a church gable with a Gothic spire, led earlier scholars to conclude that he was also an architect. In interior views, such as A Ball (Wrotham Park, Middlesex) and Jesus in the House of Martha and Mary, the artist’s main preoccupation was portraying the interior space. He relied on other artists to paint the figures. In neither work, however, can he be described as original; both scenes are set in a Renaissance room, clearly inspired by Hans Vredeman de Vries’s Jesus in the House of Martha and Mary (London, Hampton Court).