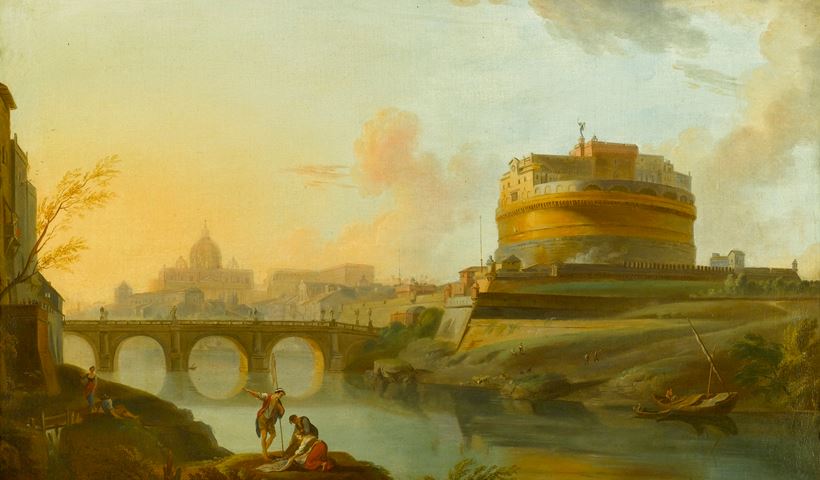 View of the Tiber, Rome, with the Castel Sant’Angelo and St. Peter’s beyond 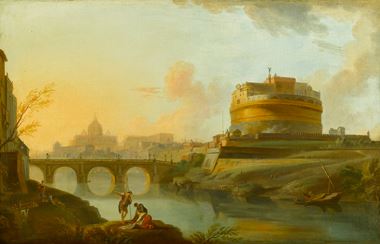 View of the Tiber, Rome, with the Castel Sant’Angelo and St. Peter’s beyond

Jean-Baptiste Lallemand was a French painter and draughtsman. He was the son of a Dijon tailor who taught him his own craft. In 1739 he moved to Paris to study painting, possibly with Giovanni Niccolò Servandoni. He is said to have travelled to England early in his career. In September 1745 he was made a member of the Académie de St Luc in Paris, and in 1747 he settled in Rome. During his 14 years in the city—interrupted only by a trip to Naples—he was in contact with such French artists as the painters Etienne Parrocel, Claude-Joseph Vernet (whose Italianate manner may have influenced Lallemand) and Jean Barbault, and the architect Charles de Wailly. (He later worked with de Wailly after his return to France, painting views of the château of Montmusard (c. 1770; Dijon, Musée des Beaux Arts). He frequented the Académie de France at a time when the architectural draughtsmen Charles-Michel-Ange Challes, Nicolas-Henri Jardin and Louis-Joseph Le Lorrain were there. In 1755 he taught Robert Adam landscape drawing. He worked on frescoes (destroyed) in the Palazzo Corsini, painting four landscapes in 1750 as well as adding figures to enliven views by Vincenzo Torrigiani ( fl mid-18th century). At about this time he executed four large paintings of antique architecture (St Petersburg, Hermitage) for the Anitchkov Palace in St Petersburg. In 1758 he painted the Finding of Moses (Rome, Pinacotheka Vaticana), intended to decorate the papal bedchamber in the Palazzo Quirinal. Four large vedute in the Villa Lante at Bagnaia may also have been painted in Rome.
In 1761 Lallemand returned to France, staying for a time in Lyon; it is possible that four decorative landscape panels in the Château de Curis at Mont-d’Or (Rhône) may date from this year. In 1762 he settled for eight years in Paris, and in 1764 he exhibited a number of views of Naples and Rome together with some pictures of imaginary architecture and genre scenes at the Académie de St Luc. He then worked for the engraver and publisher Gabriel Huquier, contributing drawings to be engraved for his Livre de paysages dessinés d’après nature, as well as designing backgrounds for Antoine Watteau’s Figures de différents caractères and Jean-Baptiste Greuze’s Divers habillements suivant le costume d’Italie (1768). From 1770 to 1773 he was in Dijon, where he was a member of the jury for the new Ecole de Dessin. It was at this time that he must have begun contributing drawings for the Description générale et particulière de la France (or Voyage pittoresque de la France), which was published in 12 volumes between 1781 and 1796. He executed no fewer than 140 views of Burgundy and others of the Franche-Comté, the Lyonnais, Champagne, the Ile-de-France and Normandy (Paris, Bibliothec National). While working on this detailed topographical project he continued to paint; he executed seascapes and ‘heroic landscapes’ (untraced) to decorate the refectory of the abbey of St Martin near Autun and painted views of Burgundy (destroyed) for the Hôtel Chartraire de Montigny in Paris. He exhibited a number of landscapes at the Exposition de la Jeunesse in 1783 and seascapes at the Salon de la Correspondance in 1786, by which time he was settled in Paris permanently. His last known works are three paintings depicting events from the French Revolution (1789–95), the Charge of the Prince de Lambesc at the Tuileries, 12th July 1789, the Death of Jacques de Flesseles, Prévôt des Marchands and the Pillage of Arms at the Invalides, 14th July 1789 (Paris, Carnavalet).
Lallemand tried his hand at all the ‘minor’ genres, including rural subjects and village scenes inspired by the work of the Dutch painters Jan Baptist Weenix and Jan Wijnants, interior scenes, such as the Painter’s Studio and Grace (both Dijon, Musée des Beaux Arts), seascapes and, above all, views of imaginary ruins, architecture, landscapes and topographical views.