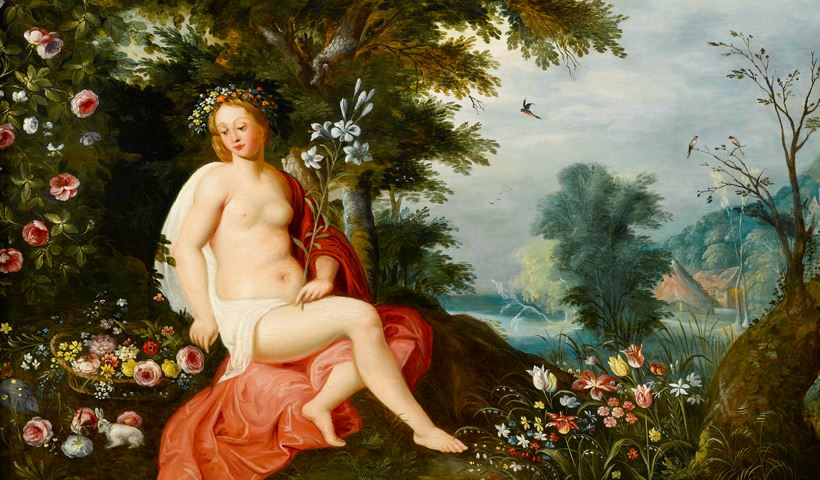 Flora Seated in a Wooded Landscape and Surrounded by Flowers 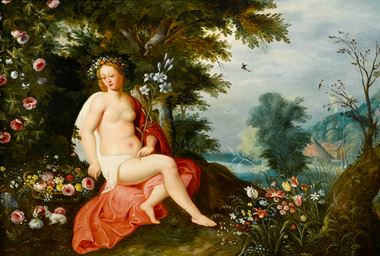 Flora Seated in a Wooded Landscape and Surrounded by Flowers

Jan Brueghel II was the son of the artist Jan Brueghel I. He probably trained in the studio of his father and then went to Milan to meet his father’s patron, Cardinal Federico Borromeo. In the spring of 1624 Jan the younger travelled to Palermo, Sicily, with his childhood friend Anthony van Dyck. After the sudden death of his father in a cholera epidemic in Antwerp, Jan returned to the Netherlands, and by early August 1625 he was back in Antwerp, where he took over his father’s studio. He sold the pictures left by his father and successfully completed half-finished works. In 1625 Jan II joined the Antwerp Guild of St. Luke, and in 1626 he married Anna Maria, the daughter of Abraham Janssen; they had eleven children. Jan II headed a large studio with students and assistants, and in 1630–31 he became Dean of the Antwerp guild. The same year he was commissioned to paint an Adam Cycle for the French court. Thereafter, the studio declined and he produced a number of small paintings in his father’s manner that no longer fetched high prices. According to an inscription attributed to one of his sons on the last page of Jan’s journal, which ends in 1651, Jan II was also in France in the 1650s, working in Paris, although no information has yet emerged to indicate how long he stayed there and what he painted. In 1651 he worked for the Austrian court. He is mentioned again in Antwerp in 1657, and various sources indicate that he remained there until his death.

Like his father, Jan II worked with Rubens and Hendrick van Balen, and his journal also indicates that he collaborated with such artists as his father-in-law, Abraham Janssen, Pieter de Lierner, Adriaen Stalbemt, Lucas van Uden and David Teniers the younger (his brother-in-law). Jan II tried to stay close to his father’s model and although the general quality of his work never surpassed that of Jan I, the distinction between his father’s late work and his own juvenilia remains problematic. The painted oeuvre of c. 340 pictures by Jan II includes landscapes, religious, allegorical and mythological themes, still-lifes and a new picture category, animals in a landscape. His landscapes can be subdivided according to subject matter: wooded landscapes, ‘near-and-far’ landscapes, wide landscapes, water landscapes, village landscapes, landscapes with the Archdukes Albert and Isabella, Hell landscapes and, finally, landscapes with the Holy Family.

The wooded landscapes include forest scenes, forest roads vanishing in the distance and close-up compositions of trees, such as Forest Road with Travellers (Florence, Uffizi), Wooded Landscape with Riders (Maastricht, Bonnefantenmuseum) and River Crossing (Warsaw, National Museum). A typical example of the ‘near-and-far’ landscapes, all of which appear to be composed in a two-dimensional mosaic style, is the Wooded River Valley with Road (Basle, Kunstmuseum). In the wide landscapes, with or without a mill, Jan repeated the compositions of his father, though with a different palette, as can be seen in the Attack on a Baggage Train (Madrid, Prado) or in the Landscape with Mills (The Hague, Dienst Verspreide Rijkscollection). His water landscapes, such as the Harbour Scene in Antwerp (Antwerp, Museum Mayer van den Bergh) or River Landscape with Wharf (Sarasota, FL, Ringling Museum), also rely on his father’s example. In the village landscapes Jan began in his father’s idiom but developed his own style in the 1640s. Examples are a Village Street with Dancing Peasants (Prague, National Gallery, Šternberk Palace) and a Village Street with Canal (Aschaffenburg, Schloss Johannisburg Staatsgallerie). Of the landscapes with the Archdukes Albert and Isabella, one, of the Royal Castle in Brussels (Madrid, Prado), was executed in collaboration with Sebastiaen Vrancx. Some of the paradise landscapes, which again emulated his father’s creations, were also collaborative efforts; for example, the Paradise Landscape with the Fall of Man (Madrid, Prado) was carried out with Denijs van Alsloot and Hendrik de Clerck. Finally, landscapes with the Holy Family were for the most part executed after his return from Italy in 1625 and are the result of his collaboration with Hendrick van Balen. The landscape backgrounds were among Jan’s best, while van Balen painted the figures.

Most of the allegories of the Senses, the Elements, the Seasons and Abundance were executed in the 1620s, while most of Jan II’s mythological themes are joint productions, for example the Rape of Europa (Vienna, Kunsthistorisches Museum), with van Balen, or the Banquet of Achelous (New York, Metropolitan Museum of Art), painted with Rubens and his studio. Jan II’s flower paintings and still-lifes either follow his father’s models or are variations on them. His flowers are usually less dense, thinner and less exact in detail, while the picture format is often narrower or reduced in size. In his cartouche paintings, Jan is indebted to Daniel Seghers.