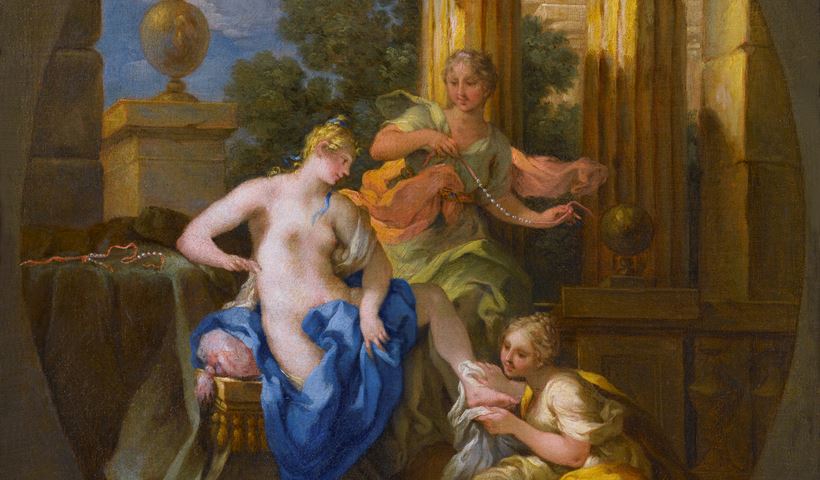 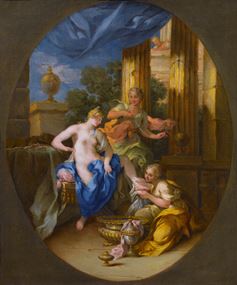 Michele Rocca’s date of birth was provided by Pio, who also wrote that in 1682 Rocca journeyed to Rome, where he was a pupil of Ciro Ferri, returning for further study to Parma, where he concentrated on pictures by Correggio. He was documented as being in Parma in 1687 but had returned to Rome by 1695, when he executed the altar of St Francis Receiving the Stigmata for San Paolino alla Regola (in situ). In 1698 he received payment for an altarpiece of the Penitent Magdalene for S Maria Maddalena, Rome (in situ). In 1710 Rocca was elected to the Congregazione dei Virtuosi al Pantheon, and in approximately the same year he executed two of his best-known paintings: the Toilet of Venus (Providence, Museum of Art) and the Finding of Moses (Univeristy of Chicago, Smart Museum of Art). These are among the finest of the small-scale, semi-precious cabinet pictures of mythological and hagiographical subjects that dominate Rocca’s oeuvre and gained for him the reputation of being a petit maître in early 18th-century Rome. Their decorative rarity, luminous pigmentation and rich painterly effects betray the fundamentally sensual nature of Rocca’s style and clearly suggest that his artistic vision was in some ways more closely aligned with the emerging French Rococo than with the neo-Baroque style of his contemporary Roman colleagues.

The major elements of Rocca’s somewhat eclectic and cosmopolitan style were nonetheless drawn from the artistic environment of Rome. He was deeply influenced by Sebastiano Conca, for whose work his has often been mistaken. His Clemency of Scipio (c. 1720; Rome, Private Collection) relies heavily on Conca’s Antony and Cleopatra, while the shared dimensions of the two paintings (870×1350 mm) have suggested to some that they were executed as pendants. Rocca also distilled features from the work of Benedetto Luti, which is most apparent in his versions of Angelica and Medoro (earliest c. 1720; untraced) where both the composition and male figure were derived from Luti’s painting of the same title (c. 1715; untraced; pencil study, Florence, Uffizi). Luti may have introduced Rocca to French painters working in Rome, and Rocca’s rapid assimilation, in part through Luti, of the languorous eroticism and fashionable intent of the French style is evident in the Angelica and Medoro paintings and, for example, in the Apollo and Thetis (late 1720s; Brussels, Private Collection).

In 1727 Rocca held an official post at the Accademia di San Luca in Rome, of which he had been a member since 1719. In the same year his Santa Cecilia (before 1727) was engraved by Pieter Tanjé. One of his last known pictures is Bathsheba in the Bath, signed and dated 1729 (Kassel, Schloss Wilhelmshohe). After this point Rocca’s career is undocumented. He may have settled in Venice between approximately 1727 and 1730. He is mentioned in a document of 1751, but no works of this Venetian period are known.